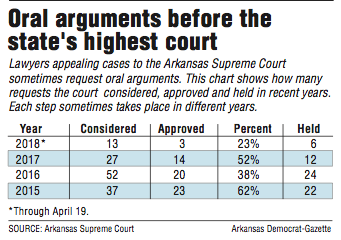 Information about Oral arguments before the state's highest court

After spending nearly an hour being peppered with questions from justices about a complex case on computers and public-record laws, attorney Brian Brooks gave a smooth response when asked afterward about his latest appearance in oral arguments before the Arkansas Supreme Court.

"It's about the only fun thing we do as lawyers," Brooks, a veteran appellate attorney based in Greenbrier, told a reporter.

Yet for Brooks and other attorneys who relish the opportunity to debate under the oculus of the Supreme Court chamber, the number of cases granted that privilege has dropped recently.

The highest court has granted less than a quarter of the requests for oral arguments it has considered in 2018, at least a four-year low, according to an analysis of court records.

Last year, the justices heard a dozen oral arguments, while in every other year dating to 2011, the court heard more than 20. Just six cases have been orally argued so far in 2018, with two more currently scheduled before the court breaks for summer recess.

When asked about the decline, neither the three justices who spoke to the Arkansas Democrat-Gazette nor any attorneys could identify a reason.

"I haven't noticed it myself," said Chief Justice Dan Kemp, who took over leadership of the court on Jan. 1, 2017.

Last September, the court shifted from holding oral arguments every Thursday while in session, to every other Thursday. Kemp said this was done to give the justices more time to write their opinions. As a result, the court has on two occasions since held two arguments in a day, something it rarely did before.

The court also has rules dictating when oral arguments are heard in a case. Rule 5.1 of the Arkansas Judiciary gives the justices discretion to approve such requests when "matters presented for consideration are such that oral arguments are appropriate for a full examination of the issues."

Arguments are limited to 20 minutes for each side, unless more time is granted by the justices.

The rule also states requests for oral arguments should be denied if the appeal is frivolous, the set of issues has already been decided "authoritatively," or the written briefs already adequately state the facts.

"I vote to take most of them," said Justice Josephine Hart. "I enjoy them, I think [the lawyers] do a good job. I think it's a good experience for the attorney."

"We just evaluate whether the argument would be helpful and there would be something it could add to the decision in the case," Wood said.

Arkansas' judicial rules regarding oral arguments are synonymous with those used by federal appeals courts -- which have also seen a noted drop in the number of cases being orally argued. An article published in 2012 in the University of Arkansas at Little Rock William H. Bowen School of Law's Journal of Appellate Practice and Process found the number of cases being orally argued across the federal circuits fell from nearly two-thirds of cases in the 1980s to around a quarter in 2011. The rate varied in different circuits.

In the 8th U.S. Circuit Court of Appeals at St. Louis, which covers Arkansas, 22 percent of cases decided on their merits in 2014 included oral arguments, according to a report by the American Academy of Appellate Lawyers. The report, which advocated for more oral arguments, prompted the group to write a letter to U.S. Chief Justice John Roberts last year, asking him to hold more discussions on the matter.

Bowen Law School professor Robert Steinbuch, who was not an author of the study published in the school's journal, said there could be a number of reasons why courts chose to allow or deny oral arguments. Some cases that are chosen are already in the public's eye, while other cases may just prompt a lot of unanswered questions from the judges.

"Courts sort of develop an approach that is sort of dependent both on the chief justice and the overall personalities of the justices on the court," Steinbuch said, adding the decisions could be "intentional or subconscious."

Brooks, the attorney who argued before the Arkansas Supreme Court earlier this month, agreed.

"Some courts are more sparing with oral arguments than others," he said. "I have just never heard our court comment one way or the other."

Asked to explain the court's process for considering oral-argument requests, Kemp said the seven justices are told when a request comes in, and the requests are approved if four or more justices wish to hold oral arguments. The chief justice said that when casting his vote, he looks to see whether there are issues of high public interest, or to see if there are gaps or "weak points" in the written briefs that need to be fleshed out.

He also noted a trend that was apparent in the court records: The justices almost always allow oral arguments in death-penalty cases.

"If it was a capital case where the death penalty is imposed, if I was the defendant, I would probably want to have oral arguments," Kemp said.

A Democrat-Gazette review of 129 requests for oral arguments made in the past four years turned up few other noticeable trends. While the requests in most cases came from the appellant -- the one appealing the case -- it did not appear to matter which side made the request. In almost all cases, the requests went unopposed.

In cases involving the state, the court also did not appear to favor requests from either government or private attorneys. (The attorney general's office declined to make Solicitor General Lee Rudofsky, who argues most cases on behalf of the state, available for an interview.)

Attorneys who spoke to this newspaper found oral arguments generally helpful, and each alluded the fact that it is the only opportunity they have to personally interact with the justices deciding their cases.

"All of our other interactions are one directional," said Tim Cullen, a Little Rock attorney who ran for a seat on the court in 2014.

Still, most said they had not noticed arguments becoming more scarce.

"As an attorney who practices there a lot, it doesn't bother me," said Brooks, the attorney from Greenbrier.

Chad Pekron is an attorney for Quattlebaum, Grooms and Tull in Little Rock who has argued before the court and also filled in for a recused justice earlier this year in a case that went to oral arguments. He noted that unlike the U.S. Supreme Court, the Arkansas justices often do not have discretion on what cases they take. A decline in oral arguments, he said, likely had to do with the substance of cases being taken before the high court.

Whether having oral arguments actually impact how justices decide a case is also up to the interpretation of the justices and the lawyers who argue before them.

"There were certainly instances in which the arguments of an attorney caused me to think more carefully about how I was leaning," said former Chief Justice Howard Brill, who preceded Kemp.

In 2015, when Brill was appointed to fill the chief justice vacancy in September, the high court approved 62 percent of the cases it considered for holding oral arguments.

The next year, the court approved about half of the requests early on, before rejecting most requests during the fall term.

Around this time, Brill said, the court changed its method for reviewing oral arguments. Before, it had been up to the discretion of the chief justice, but the process changed in mid-2016 to Brill making a recommendation, and then allowing the justices to vote. Brill said he couldn't recall if that change led directly to fewer cases being approved.

The drop likely contributed to fewer oral arguments in 2017, because those dates can take a while to schedule.

Most lawyers in Arkansas look forward to arguing before the state's highest court, Pekron said, and attorneys can dwell on having their cases decided solely on their written briefs.

"I always feel as though, if I had just had the opportunity, I could change their minds," Pekron said. "Whether that's true or not, I don't know."