3 killed in head-on collision between 18-wheelers on I-40; police ID drivers, passenger who died 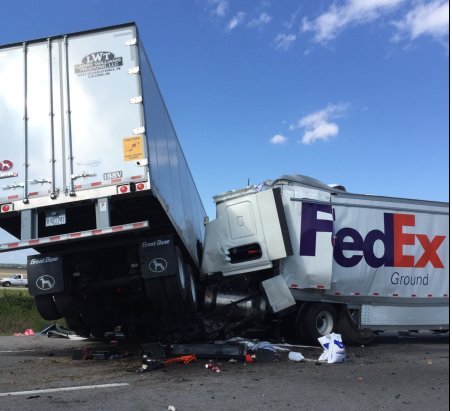 Three people were killed in a collision between two 18-wheelers on I-40 in Lonoke County on April 24, 2018, officials said.

Three people died in a collision Tuesday afternoon involving two 18-wheelers on Interstate 40 in central Arkansas, a wreck that shut down part of the highway for hours.

The crash near the Carlisle exit in Lonoke County reportedly occurred shortly before 3:20 p.m.

Danny Straessle, a spokesman for the Department of Transportation, said a truck headed east crossed the median and hit a FedEx truck in the westbound lanes.

Police said Stice died at the scene as did two people in the westbound truck: 47-year-old driver Jesus Escareno of Houston and 55-year-old passenger Mark Lynch of Magnolia, Texas.

Straessle said it was unclear how the truck initially crossed a wire safety barrier in the median and said it may have gone airborne at some point. No other vehicles were involved.

Investigators with the highway department and the Arkansas State Police were on the scene as of 5:40 p.m., Straessle said.

All westbound lanes were closed until around 10:30 p.m., and one eastbound lane was closed for some time as well. Lengthy traffic backups quickly developed in the area as vehicles were diverted onto U.S. 70 at the 193 mile marker.

[Photos by Arkansas Department of Transportation]