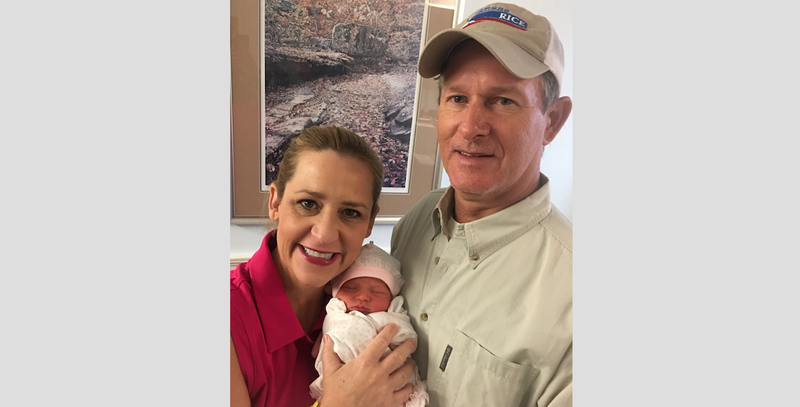 Arkansas Attorney General Leslie Rutledge poses for a photo with her newborn daughter, Julianna Carol Johnson, and her husband, Boyce Johnson, in this photo posted on her Twitter account.

The attorney general's press office announced the birth in a statement Monday morning. According the release, the baby girl weighed 5 pounds, 15 ounces, and was born at the University of Arkansas for Medical Sciences. She is the couple's first child.

Rutledge, 41, married Boyce Johnson, 58, in 2015. The couple splits their time between Maumelle and a farm near Marion.

"Boyce and I are bursting with joy over our new addition to the family," Rutledge said in a statement. "The birth of our daughter is an absolute blessing and gift from God. Thank you to our family, friends, and all Arkansans for the outpouring of well wishes and prayers throughout my pregnancy."

In the release, Rutledge also thanked her doctor and the staff at UAMS. Later Monday, she tweeted a picture of herself, Boyce and her newborn.

The name Julianna Carol is derived from Rutledge's mother's middle name, Carol, and the middle name of the girl's paternal grandmother, Ann, according to the release.

Rutledge announced in April that she was expecting a daughter to be born in August. Through the summer, she has continued campaigning for re-election.

According to her news release, Rutledge is the first constitutional officer in Arkansas to give birth while in office.

Her opponent in the November election, Democrat Mike Lee, tweeted his congratulations Monday.

"Family is a wonderful thing, and there is nothing like the joys of parenthood," Lee said in a post.

Rutledge, a Republican, was elected to her first term as attorney general in 2014. She is the state's first elected female attorney general, and also serves as the chairman of the national Republican Attorneys General Association.