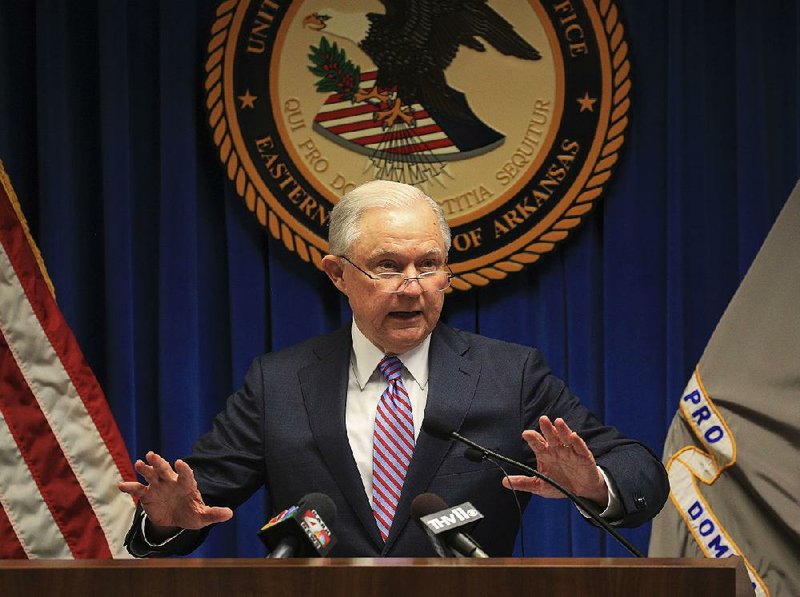 U.S. Attorney General Jeff Sessions speaks Wednesday at the U.S. attorney’s office in Little Rock. Sessions, who took no questions at the appearance, later went to Lake Hamilton High School in Pearcy for a discussion on school safety. ( Staton Breidenthal)

Sessions spoke to a crowd of law enforcement officers and politicians Wednesday morning at the Little Rock office of Cody Hiland, U.S. attorney for the Eastern District of Arkansas. In the afternoon, Sessions participated in a discussion on school safety at the Lake Hamilton School District in Pearcy.

The 2015 Supreme Court ruling, that the definition of a violent felon in the Armed Career Criminal Act of 1984 is too vague, led to hundreds of offenders being re-categorized as nonviolent -- particularly those charged with being a felon in possession of a firearm.

Sessions, however, said the law's real consequence was to release violent offenders back into the community.

Sessions' appearance in Little Rock came just hours before Sens. Tom Cotton, R-Ark., and Orrin Hatch, R-Utah, introduced the Restoring the Armed Career Criminal Act of 2018, a bill that would do away with the distinction between "violent felony" and "serious drug offense" and create one category, which would be called "serious felony."

Speaking in Little Rock, Sessions said Arkansas' overall violent-crime rate climbed 15 percent from 2014 to 2016, while aggravated assault increased by 15 percent and the murder rate rose nearly 29 percent. Those rates, Sessions said, are indicative of a broader increase in crime across the country during the same time period, adding that "in the years before President [Donald] Trump took office, violent crime was surging in America."

"Releasing repeat offenders has consequences," Sessions said. "Every crime committed by a recidivist released by this court case would not have happened. Every one of their victims would not have been victimized."

Sessions said at least eight people were released in Little Rock alone as a result of the Supreme Court's ruling, and that more than 42 percent of offenders released because of that ruling have been arrested again. The overall recidivism rate for released prisoners in the United States is 67.8 percent, according to the Department of Justice's Bureau of Justice Statistics.

Sessions praised local law enforcement officers, citing a 60 percent increase in Arkansas prosecutions and a 25 percent reduction in violent crime in Little Rock this year, but he said the weakening of the Armed Career Criminal Act means police are "missing one of the most important law enforcement tools we had."

"It's difficult to name a nexus on things like that in Little Rock," Buckner said.

Sessions said the goal of fixing the Armed Career Criminal Act is not to fill prisons, but Hiland said full cells may be an unintended consequence of the ruling's reversal.

"But if the byproduct of removing dangerous criminals from our community is that they are off the streets, then so be it," Hiland said. "I'd rather criminals be busting at the seams in prison than walking free on the streets."

Pulaski County Sheriff Doc Holladay said he believes the Supreme Court's ruling has affected local law enforcement as well as on a national level, adding that Sessions spoke more on the subject in a closed meeting after the news conference.

"What I'm in favor of is ensuring that career criminals are held accountable for their behavior, and part of that of course deals with stronger sentencing and closer supervision upon release," Holladay said.

Sessions participated in the discussion at the school district in Garland County as part of Trump's Federal Commission on School Safety.

"The fundamental duty of the government is to keep its people safe, and that includes our most precious citizens, of course, our children," Sessions said. "We want to make sure no child lives in fear, that no parents are in fear for their children at school. [Trump] knows that to make that happen, we have to listen to the men and women who have committed their lives to achieving that goal."

Lake Hamilton Superintendent Steve Anderson said the school district -- which includes a combined elementary, middle and high school campus -- is at the forefront of the state's efforts to add more armed security.

U.S. Rep. Bruce Westerman, R-Ark., who formerly served on the Lake Hamilton School Board, said after the event that he was very impressed with the preparedness of the district and that he learned more points about a security plan that he previously thought he knew very well.

Westerman said the point was brought up that all school districts are different and the message was that school districts need the flexibility to tailor security plans to their needs. And while Lake Hamilton's plan is quite extensive, he said, a similar plan can be relatively inexpensive for a district to implement.

During Sessions' appearance, about 60 demonstrators gathered in a parking lot at Lake Hamilton High School to vocalize their dissatisfaction with Trump administration policies. They were kept behind a barricade on the opposite side of the building from where Sessions arrived and departed.

Law enforcement officers would not allow demonstrators to stand on sidewalks that lined that road where the motorcade entered the campus, and they threatened to arrest one demonstrator who refused to stand behind the metal barricade.

Information for this article was contributed by John Moritz of the Arkansas Democrat-Gazette and by Beth Reed and Lara Farrar of The Sentinel-Record. 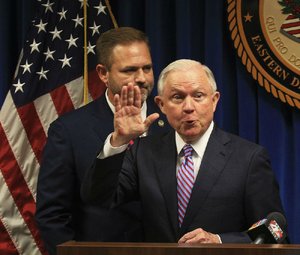 Photo by Staton Breidenthal
Attorney General Jeff Sessions, with U.S. Attorney for the Eastern District of Arkansas Cody Hiland behind him, bids farewell to a gathering of law enforcement officials after speaking Tuesday in Little Rock.