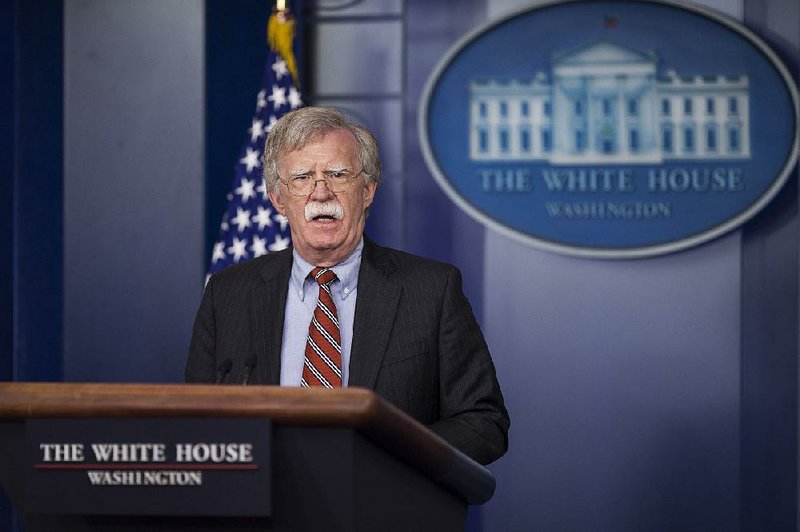 National security adviser John Bolton, shown speaking Thursday, said Tuesday that “what we really need is not more rhetoric. What we need is performance from North Korea on denuclearization.”

"The United States has lived up to the Singapore declaration. It's just North Korea that has not taken the steps we feel are necessary to denuclearize," Bolton said in an interview Tuesday on Fox News.

He added the United States will continue to apply pressure until Pyongyang produces results.

"The idea that we're going to relax the sanctions just on North Korea's say-so, I think, is something that just isn't under consideration," Bolton said. "We're going to continue to apply maximum pressure to North Korea until they denuclearize, just as we are to Iran."

Unlike North Korea, Iran does not possess nuclear weapons, according to U.S. intelligence agencies and international monitors. Under a 2015 nuclear accord, Iran agreed to curtail elements of its nuclear energy program that raised proliferation concerns and pledged never to "seek, develop or acquire any nuclear weapons." Trump withdrew the United States from that agreement in May.

The Trump administration has consistently sought to reassure critics that Kim will make good on his pledges to denuclearize. Last month, Trump tweeted he had "confidence that Kim Jong Un will honor the contract we signed &, even more importantly, our handshake" in Singapore.

Yet the most tangible result of the June 12 summit so far has been last month's handover by North Korea of the remains of more than 50 service members killed in the Korean War. The question of denuclearization remains a separate one, Defense Secretary James Mattis has said, and U.S. and North Korean diplomats traded jabs on the issue at last weekend's annual conference of the Association of Southeast Asian Nations.

At that conference, which also took place in Singapore, Secretary of State Mike Pompeo handed to North Korean Foreign Minister Ri Yong Ho a letter from Trump to Kim.

Bolton revealed Tuesday that the letter contained a proposal from Trump for Pompeo to make another visit to North Korea to meet with Kim.

"Secretary of State Pompeo is prepared to go back to North Korea to meet with Kim Jong Un. We've proposed that in our most recent letter from the president to Kim Jong Un," Bolton said.

"The president's prepared to meet at any point," he added. "But what we really need is not more rhetoric. What we need is performance from North Korea on denuclearization."

The returnee was handed over to South Korean authorities through Panmunjom, a contact point on the border between the two countries, the South's Unification Ministry said in a statement.

The 34-year-old man, who was identified only by his last name, Seo, was arrested in North Korea for illegal entry July 22.

The ministry released no further details, citing a pending investigation. The man will probably face criminal charges in South Korea because of a national law that bars citizens from visiting the North without government permission.

Although more than 30,000 North Koreans have fled to South Korea in the past three decades, it is rare for South Koreans to enter North Korea illegally. And it is highly unusual, though not unprecedented, for the North to return them.

Tuesday's repatriation came as the North is mounting pressure on South Korea to return citizens it says are being held in the South against their will.

Two North Koreans, Kim Ryen Hi and Kwon Chol Nam, are campaigning for their repatriation to the North, saying that their decisions to defect were mistakes.

North Korea also is demanding the return of 12 waitresses who arrived in South Korea in 2016 in a group defection. While the South maintains that they defected of their own free will, their manager, who led the women to the South, later claimed he was blackmailed into taking them against their will. Prosecutors and South Korea's National Human Rights Commission are investigating the scandal.

Information for this article was contributed by Felicia Sonmez of The Washington Post; and by Choe Sang-Hun of The New York Times.