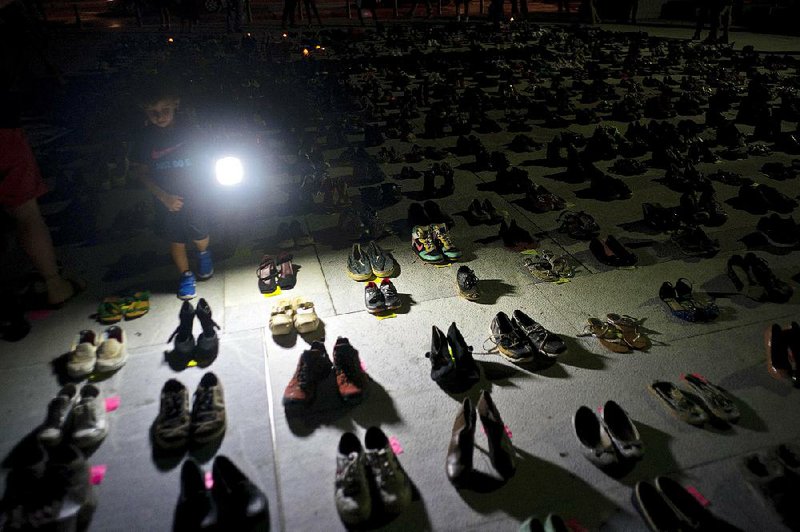 A child shines a light June 1 on hundreds of shoes at a memorial in front of the Puerto Rico Capitol in San Juan for people who died as a result of Hurricane Maria.

SAN JUAN, Puerto Rico -- The government of Puerto Rico has quietly acknowledged in a report posted online that more than 1,400 people died in the aftermath of Hurricane Maria -- a figure that is more than 20 times the official death toll.

In a draft of a report to Congress requesting $139 billion in recovery funds, the Puerto Rican government admits that 1,427 more people died in the last four months of 2017 compared with the same time frame in the previous year. The figures came from death registry statistics that were released in June, but which were never publicly acknowledged by officials on the island.

Hurricane Maria cut through the island on Sept. 20, knocking out power and initially killing about a dozen people. The government's official count eventually grew to 64, as more people died from suicide, lack of access to health care and other factors. The number has not changed despite several academic assessments that the official count did not come close to tallying the storm's death toll.

"Although the official death count from the Puerto Rico Department of Public Safety was initially 64, the toll appears to be much higher," said the report, titled "Transformation and Innovation in the Wake of Devastation."

In another section, it said: "According to initial reports, 64 lives were lost. That estimate was later revised to 1,427."

The government was widely criticized for undercounting the number of people who died on the island as the power failure stretched for months, causing deaths from diabetes and sepsis to soar. Many people died from lack of access to hospitals, or because there was no power to run the machines they used to breathe.

The territory's government said the additional deaths resulted from the effects of a storm that led to "cascading failures" in infrastructure across the island of 3.3 million people.

The administration of Gov. Ricardo Rossello stopped updating its official death toll months ago and ordered an investigation to determine if the number of fatalities was substantially undercounted. Public Safety Department Secretary Hector Pesquera said the new total will reflect the findings of the investigation, which is expected in the coming weeks.

The figure of more than 1,400, Pesquera said, "is simple math" based on the number of excess deaths. "This is not the official number of deaths attributable to Hurricane Maria," he said.

Hurricane Maria, which came just two weeks after Hurricane Irma passed near enough to cause damage to the island, knocked out power and water systems across Puerto Rico and caused widespread flooding that left many sick and elderly people unable to get medical treatment.

"The hurricanes' devastating effects on people's health and safety cannot be overstated," the government said in the report seeking assistance from Congress to help rebuild an island that was already struggling from a deep economic crisis at the time of the storm.

"We definitely acknowledge this is a realistic estimate," Pedro Cerame, a spokesman for the Puerto Rican government's Federal Affairs Administration, said of the numbers in the upcoming report to Congress. "We don't want to say it out loud or publicize it as an official number. The official number will come, and it could be close. But until we see the study, and have the accuracy, we won't be able to recognize the number as official."

Cerame acknowledged that the final version of the report hedges the language to say that the additional deaths "may or may not be attributable" to the storm; the 1,427 figure was also deleted from a chart.

"I want to emphasize, though, that we have always expected the number to be higher," he said in an email. "The estimate provided was done using data from the Demographic Registry which was made available to the members of the media."

Although the official death toll stopped at 64, Puerto Rican officials have said that more people likely died due to indirect effects of the powerful storm. "We always anticipated that this number would increase as more official studies were conducted," Pesquera said.

The island commissioned an independent epidemiological study by George Washington University and the Milken Institute of Public Health that is due in coming weeks.

Most of the deaths occurred not in the initial storm, but in the ensuing days and weeks when the electrical grid went dark, roads blocked by downed power lines and other debris made it difficult to move around and emergency services were stretched beyond their capabilities.

Government agencies have used various methods to count storm deaths over the years, with authorities generally trying to sort them into direct and indirect categories.

U.S. Rep. Nydia Velazquez, D-N.Y., who was born in Puerto Rico, has called for legislation that would establish federal standards for death counts after disaster. "It has been tragically clear for some time that the devastation from Irma and Maria was many magnitudes worse than the official death toll suggested," she said.

The final version of the recovery plan being submitted to Congress outlines ambitious projects for Puerto Rico that include major highway renovations, $15 billion for the Department of Education and $26 billion for the power grid. The government has asked for $6 billion for repair and replacement of public buildings and $3.9 billion for environmental use, according to an announcement from the governor's office.

"Puerto Rico has a unique opportunity to innovate and rebuild the Puerto Rico that we all want," Rossello said in a statement.

Information for this article was contributed by Frances Robles of The New York Times; and by staff members of The Associated Press.