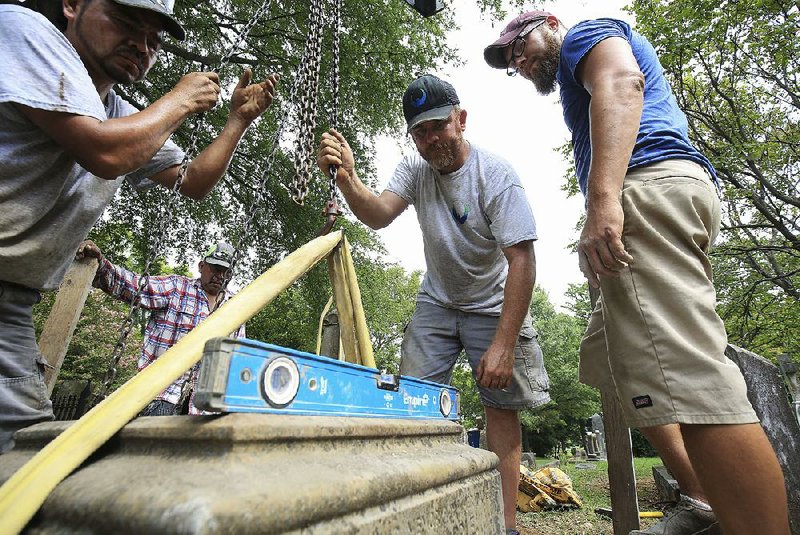 Texas Cemetery Restoration owner James “Rusty” Brenner (second from right) and his crew, Ernesto Dimas (from left), Lucio Vasquez and John Murchison, make sure the base of a monument is level Wednesday before putting the next piece on as they restore mon- uments at Mount Holly Cemetery in Little Rock.

It wouldn't take much for the monument, built in 1891, to topple over, said James "Rusty" Brenner, leader of a crew working to level it Wednesday morning. Even a child running into it could cause it to fall and create a domino effect of damaged gravestones, he said.

The site, which some call "the Westminster Abbey of Arkansas," is owned by the city, but repairs are mostly funded by donations and grants, Mount Holly Cemetery Association archivist Kay Tatum said.

The cemetery was dedicated in 1843, and repairs are an ongoing process. The rock wall around the edges continually needs work, and the street that runs through it has some paving issues, Tatum said.

The latest triage was funded with grant money from the Arkopolis Questers, a Little Rock chapter of an international historic preservation organization.

"Something that's as old as Mount Holly Cemetery requires maintenance all the time," Tatum said.

She said the city has been generous, but has to divide its resources, so gifts are fundamental.

"Every dollar is important to us," she said.

Dottie Funk, a grant writer for the chapter, said the group votes a few times each year on the projects they want to submit funding applications for. The chapter has raised $35,000 in grants since it started in 1998.

The first grant funded a partial restoration of the fountain. In 2016, the group received nearly $8,000 in grants to restore the sexton's bellhouse, the traditional cottage for the cemetery's groundskeeper. A grant from the statewide Questers chapter can bring in $1,000 to $2,000, while the group can ask for between $5,000 and $7,000 for a grant from the international level of the organization, Funk said.

Another monument restored last week was dedicated to a woman named Eleanor Housing and her son, John, who died five days apart in 1861, possibly during the flu epidemic, Funk said. No obituary exists due to the stoppage of newspaper articles during the Civil War, so the conjoined markers are possibly the only remaining record of the deaths.

Most of the monuments themselves are in decent condition, but age and weather can make their footing uneasy, Brenner said. All five were cleaned at the end of the process with a chemical compound that will take effect over the next several weeks, whitening the marble or limestone.

Over the years, the Questers have also secured grants to restore an iron bench dedicated to Andrew Scott, a Supreme Court justice for the Arkansas Territory, and a memorial to John D. Adams, an early owner of the Arkansas Gazette.

The cemetery is still active. A private graveside service was held there on Friday for Ron Robinson, the veteran Little Rock communications professional who died Aug. 14. Robinson's grave joins those of numerous governors of Arkansas, mayors of Little Rock and other notable Arkansans, from generals to suffragists to authors.

"It's important to know where we came from," Funk said.

Often, when Tatum walks through the cemetery to ask if people are looking for a certain grave, they're out-of-town visitors looking for the graves of people like David O. Dodd, the 17-year-old spy executed during the Civil War, or Elizabeth "Quatie" Ross, who is known in local folklore for giving her blanket to a sick child while traveling through Arkansas on the Trail of Tears before dying of pneumonia herself.

"If you want to know about Arkansas, Mount Holly is a good place to start," Tatum said.

Gretchen Hall, president and chief executive officer of the Little Rock Convention and Visitors Bureau, noted Mount Holly Cemetery's importance to historic and civil rights tourism in the city. It was one of the first cemeteries to be placed on the National Register of Historic Places in 1970. In its early years, it had sections set aside for black, Catholic and Jewish decedents.

On Wednesday, Brenner pointed out a monument that had caught his attention -- on top of the base stood a stone pillar, cut off diagonally at the top, with another built to appear that it had fallen against it.

He said it seemed to be an artistic representation of a life cut short. But he worried about its precarious balance. 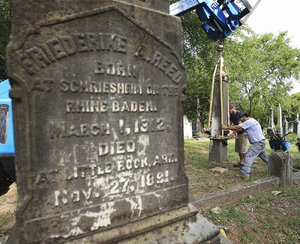