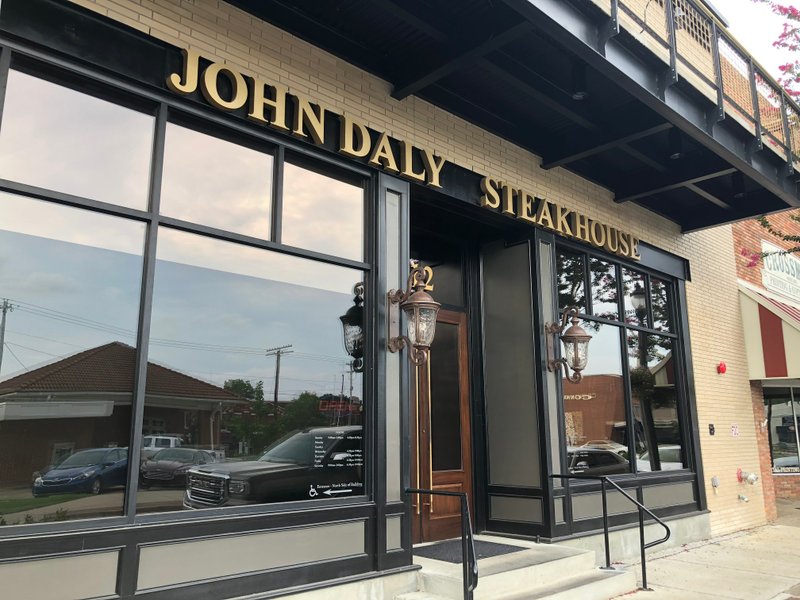 The exterior of what was formerly John Daly Steakhouse, 912 Front St. in downtown Conway.

A steakhouse bearing the name of professional golfer John Daly closed amid court proceedings after less than a year in business in central Arkansas, filings show.

Among the accusations levied against ownership of the shuttered John Daly’s Steakhouse are that its developers failed to pay for the services provided during the project's construction process.

In June, C.R. Crawford Construction filed a complaint against restaurant owner S.A.M. Group, accusing the firm of failing to pay $158,015.40 in construction costs.

A letter dated Oct. 27, 2017, from a lawyer representing the construction company to S.A.M. Group registered agent Michael Vickers states that a construction lien would be placed against the property if services were not paid in full.

In late November, another letter was sent from C.R. Crawford to Vickers, stating that it would be entitled to attorney’s fees as well as the amount of the lien and interest at 10 percent per year if a full payment was not received within 20 days of the letter.

Failure to pay the $170,000 now owed could also result in foreclosure proceedings, according to court documents.

“We just want to be paid for the work we did,” Fayetteville attorney Jason Wales, who is representing C.R. Crawford, told the Democrat-Gazette on Wednesday.

An attorney for S.A.M. Group did not immediately return a message seeking comment.

Court records show the company wants personal property inside the building to be exempt from ongoing legal matters and has requested a hearing to determine the validity of exempt property.

“They are claiming that they don’t own anything other than the building itself, which we don’t believe," Wales said.

Among the disputed items are furniture, fixtures, dishes, silverware, televisions, computers and paintings. A collection of Daly's memorabilia was also featured inside the eatery, but the fate of those items wasn't immediately clear.

Daly, who had ties to Dardanelle during his childhood and later attended the University of Arkansas, was not active in the project’s planning but scheduled periodic visits to his namesake restaurant.

The plaintiff, Dixie Whitfield of the Little Rock-based Remington Design Group, said that she entered into an agreement Aug. 31, 2016, with S.A.M. Group to perform work on the steakhouse.

In late July, the Log Cabin Democrat reported that a sign placed outside noted new management and remodeling. No signage was found on the glass front doors Tuesday.

The 912 Front St. property, which has apartments on a second floor, was listed for sale Tuesday at a price of $2.85 million. An archived listing from April showed a price of $3.2 million.

The steakhouse concept was initially pitched as a chain restaurant with 10 locations initially proposed over the next five years. It was not immediately clear whether future outlets of John Daly’s were still in the works.

A message left with Daly seeking comment on the restaurant's closure was not immediately returned.