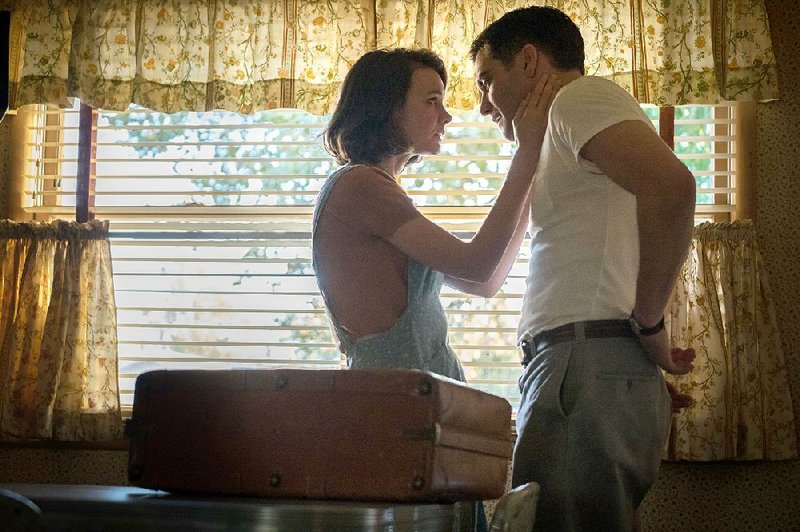 Jeanette (Carey Mulligan) and Jerry (Jake Gyllenhaal) are a faltering couple in small-town Montana in 1960 in Paul Dano’s Wildlife.

For every movie adapted from a novel, there's always someone to remind us that the book was better.

Often, they have a point. Books offer a different quality of experience from movies; they are a kind of pure telepathy that puts us directly in the mind of the author, with whom we collaborate to produce the show in our heads. Movies, while they also (ultimately) play in our heads, are composed of images and sounds, not words. They exist in a different realm and honestly require less of us than literature.

If you are the sort of person who is drawn to the interiority of certain writers, you may be hard-pressed to imagine how anyone could film them. That doesn't stop filmmakers, who have attempted to adapt works as woolly as William Burroughs' Naked Lunch (David Cronenberg made a fine movie about writing that serves as an impressionistic portrait of the author) and James Joyce's Ulysses (Joseph Strick's 1967 film is necessarily reductive, but a fascinating experiment). Michael Winterbottom had fun with the whole notion with his 2005 film Tristram Shandy: A Cock and Bull Story about a fictional director named Michael Winterbottom trying to shoot an adaptation of Laurence Sterne's unfilmable The Life and Opinions of Tristram Shandy, Gentleman.

Had you asked me before I'd seen Paul Dano's directorial debut, an adaptation of Richard Ford's 1990 novel Wildlife, I might have told you that I thought Ford was one of those writers best left alone. But having seen the film, I'm glad Dano was inspired by the book, and that he subtly (and respectfully) tweaked some of Ford's ideas about the slow-motion disintegration of an American striving-class family in 1960 Montana.

Ford's book is about a 16-year-old learning about and coming to an accommodation with the limitations of his parents. Dano's film, which he co-wrote with his partner, actor Zoe Kazan, gives a slightly younger protagonist and shifts some of the focus unto the boy's mother, Jeanette, played with a quiet yet ferocious desperation by Carey Mulligan.

Or perhaps Mulligan's Jeanette simply wrests our attention away from her 14-year-old son Joe (Ed Oxenbould) by sheer strength of her performance. Mulligan is heartbreaking in a role that feels drawn from life; a woman whose image of herself as wife and mother is worn thin -- a frayed thing trying to hold on in a frontier town where she knows few people. Where the smoke from the fire in the mountains is liable to scar one's lungs.

Not that the fire is worth worrying about; if it gets too close, as an almost girlfriend tells her son, it'll be too late to do anything about it.

Jeanette and Joe were brought to Great Falls by Jerry Brinson (Jake Gyllenhaal) -- her husband, his father. Jerry has about him the air of a reformed optimist; he came to Montana to work at a golf club, hoping that he might befriend some of its influential members and that their rich-man's luck might trickle down to him. He's a slightly different character from the Jerry in the book, but Gyllenhaal, with his rabbity eyes and vulnerability, makes him feel authentic. This is a character who doesn't quite understand himself, who isn't sure of his own qualities. He has a fluid swing, but he's not good enough to win anything more than $2 bets from members.

And this gets him fired, and humiliated, cut loose to drift.

But when he's offered his job back, he's too proud to take it. "I won't work for people like that," he spits. He drinks in bars in the afternoon. His son takes on a couple of part-time jobs.

Jeanette rolls up her sleeves to pitch in. She starts teaching swimming, while looking for more regular work. Jerry takes off to fight fires in the mountains. Because he needs to do something, to be of use, but more importantly because it gets him away from the family that reminds him of his failure.

Jeanette enters the orbit of a wealthy man, Warren Miller (Bill Camp). He is older, politically reactive (not quite the bullying bigot he is in the book). Jeanette introduces him to Joe, her way of nearly telling him how things must be.

This is all terrifically impressive -- the best ensemble performance of the year, and Mulligan ought to be given consideration for all the acting awards. Dano and Kazan have deftly adapted a bittersweet, haunting work into a movie that retains the tone while bending the argument toward pragmatic feminism.

When I asked Ford about it last month, he said he wanted Dano and Kazan to make their movie and not to think about keeping faith with his book. Yet they kept faith with it, even though the changes are major.

The result is a film that is both sad and clear-eyed about the way people court affection and bargain with themselves and others. It is the type of story some people will not consider much of a movie at all, but it will find a certain audience. It is understated, both in the lines its characters are called upon to say (most of which can be found somewhere in Ford's text) and in the way it presents its images. If you remember a certain kind of small-town '60s America, this film will make you ache.

It's not better than Ford's novel. It's not that much different either. But it is its own thing, beautiful and terrifying.