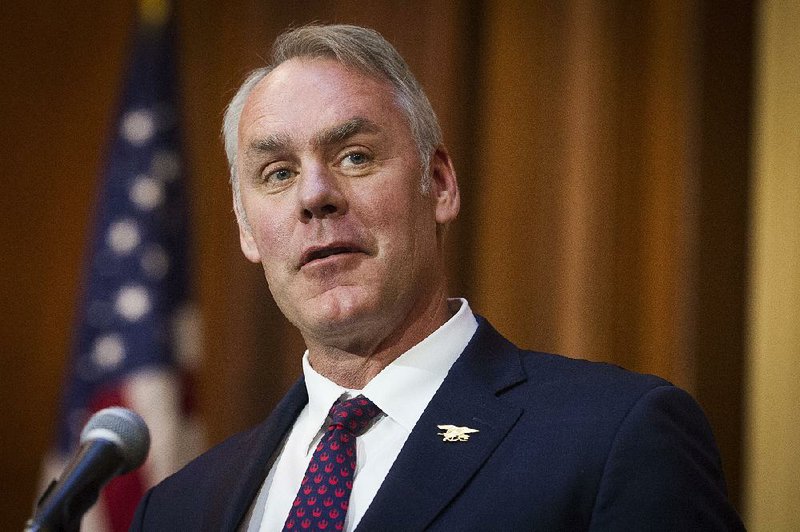 Outgoing Secretary of the Interior Ryan Zinke, shown at a news conference last week, said in his resignation letter that the federal investigations he faces are based on “meritless and false claims.”

In his resignation letter, Zinke said that "vicious and politically motivated attacks" against him had "created an unfortunate distraction" in fulfilling the agency's mission.

Trump, in tweeting about Zinke's departure, said the former Montana congressman "accomplished much during his tenure" and that a replacement would be announced this week. The Cabinet post requires Senate confirmation.

Zinke is leaving weeks before Democrats take control of the House, a shift in power that could intensify the investigations into his conduct.

The resignation letter, obtained Saturday from a Zinke aide by The Associated Press, cites what Zinke calls "meritless and false claims" and says that "to some, truth no longer matters."

The letter, dated Saturday, said Zinke's last day would be Jan. 2. It was not clear whether Zinke had already submitted the letter when Trump tweeted.

Zinke is the latest Trump official to exit an administration plagued by questions of ethical conflict. And his departure comes as Trump has begun a shake-up in his administration. In early November, the president fired Attorney General Jeff Sessions, and last weekend he announced that his chief of staff, John Kelly, was leaving later this month.

Kelly's team told Zinke that he should leave by year's end or risk being fired in a potentially humiliating way, two people familiar with the discussion said.

Zinke, 57, played a leading part in Trump's efforts to roll back federal environmental regulations and promote domestic energy development. He drew attention from his first day on the job, when he mounted a horse to ride across Washington's National Mall to the Department of Interior.

The White House concluded in recent weeks that Zinke was likely the Cabinet member most vulnerable to investigations led by newly empowered Democrats in Congress, according to an administration official who was not authorized to publicly discuss personnel matters and who spoke on condition of anonymity.

His tenure was temporarily extended as the Interior Department helped with the response to California wildfires and as the West Wing was consumed with speculation over the future of Kelly. But White House officials pressured Zinke to resign, the official said, which he did some time after his final public appearance, at his department's Christmas party on Thursday night.

As interior secretary, Zinke pushed to develop oil, natural gas and coal beneath public lands in line with the administration's business-friendly aims. But he has been dogged by ethics investigations.

During his time in office, Zinke has been the subject of at least 15 investigations, including into his connection to a real estate deal involving a company that the Interior Department regulates; whether he bent government rules to allow his wife to ride in government vehicles; and reports that he allowed a security detail to travel with him on a vacation to Turkey at considerable cost.

The inquiries include an examination of the real estate deal involving Zinke's family and a development group backed by the Halliburton chairman, David J. Lesar. Zinke stood to benefit from the deal, while Lesar's oil-services company stood to benefit from Zinke's decisions on fossil-fuel production.

Zinke has repeatedly denied wrongdoing. "I love working for the President and am incredibly proud of all the good work we've accomplished together," he said on Twitter. "However, after 30 years of public service, I cannot justify spending thousands of dollars defending myself and my family against false allegations."

Democratic leaders in Congress were scathing in their response to the news that Zinke was leaving.

"Ryan Zinke was one of the most toxic members of the cabinet in the way he treated our environment, our precious public lands, and the way he treated the govt like it was his personal honey pot," Senate Minority Leader Charles Schumer of New York tweeted Saturday. "The swamp cabinet will be a little less foul without him."

House Minority Leader Nancy Pelosi, who is in line to become speaker in January, said Zinke had "been a shameless handmaiden for the special interests" and that his "staggering ethical abuses have delivered a serious and lasting blow to America's public lands, environment, clean air and clean water."

Rep. Raul Grijalva of Arizona, the top Democrat on the House Natural Resources Committee, had warned that after Democrats took control of the House, they intended to call Zinke to testify on his ethics issues.

Grijalva spokesman Adam Sarvana said Saturday that committee leaders still intended to ask for Zinke's testimony. "It's safe to say that Citizen Zinke may be leaving, but real oversight of former Secretary Zinke has not even started," Sarvana said in an email.

"This is no kind of victory, but I'm hopeful that it is a genuine turning of the page," Grijalva said of Zinke's exit. He added, "The next interior secretary should respect the American people's desire for strong environmental standards and an end to corporate favoritism."

Earlier this month, Zinke unleashed a jarring personal attack on Grijalva, tweeting, "It's hard for him to think straight from the bottom of the bottle."

Zinke got a warmer send-off from Republican Sen. Lisa Murkowski of Alaska, head of the Energy and Natural Resources Committee, who said in a statement that she "was disappointed to learn that Secretary Zinke is stepping down."

"He has been a strong partner for western states and for Alaska, in particular," Murkowski said. "After years of frustration with the Department, he came in and took a very different approach -- he listened to us, built a great team, and worked with us to advance our priorities."

Under Zinke's watch, the Interior Department moved to auction off more oil leases, ended a moratorium on new sales of federally owned coal, and repealed mandates governing drilling. Zinke's focus on the president's energy agenda was cheered by oil, gas and mining advocates, who credit the administration with seeking to balance conservation with development on public lands.

Zinke made plans to realign the agency's bureaucracy, trimming the equivalent of 4,600 jobs, about 7 percent of its workforce. He also proposed an overhaul that would have moved decision-making out of Washington, relocating headquarters staff to Western states at a cost of $17.5 million.

Several advocacy groups welcomed his departure Saturday, even as they pivoted to attack Deputy Secretary David Bernhardt, who will take over in the interim. Bernhardt is a policy expert who has steered most of the Interior Department's key policy decisions since joining the agency in August 2017, is one of several Western Republicans thought to be under consideration for the job.

"Zinke will go down as the worst Interior secretary in history," said Kieran Suckling, executive director of the Center for Biological Diversity, in a statement released Saturday. "His slash-and-burn approach was absolutely destructive for public lands and wildlife. Allowing David Bernhardt to continue to call the shots will still be just as ugly. Different people, same appetite for greed and profit."

In addition to Bernhardt, outgoing Sen. Dean Heller, R-Nev., is a possible contender for the Interior Department post, according to Republicans who have been engaged in discussions with the administration in recent weeks. House Natural Resources Committee Chairman Rob Bishop, R-Utah, who will relinquish his gavel next month, is another candidate.

Information for this article was contributed by Ellen Knickmeyer, Matthew Brown, Jonathan Lemire, Matthew Daly and Alan Fram of The Associated Press; by Juliet Eilperin, Josh Dawsey, Darryl Fears and Lisa Rein of The Washington Post; and by Julie Turkewitz and Coral Davenport of The New York Times.