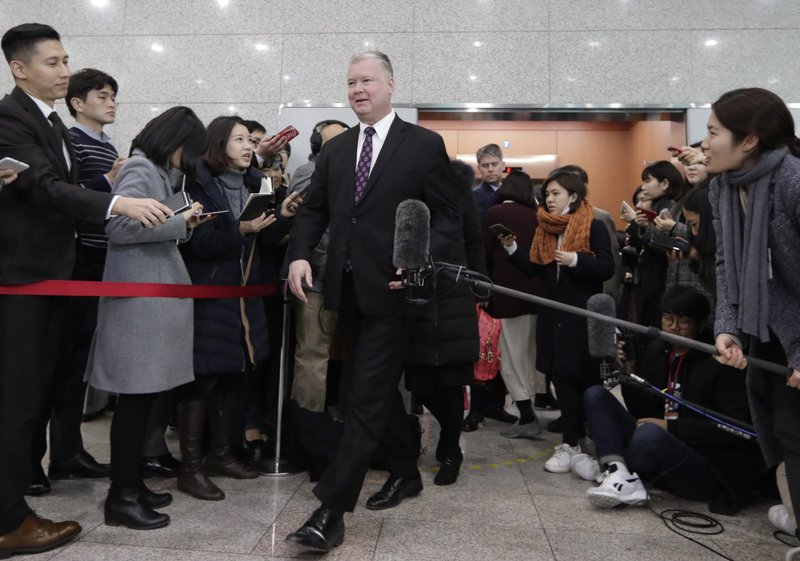 U.S. Special Representative for North Korea Stephen Biegun, center, leaves at Foreign Ministry in Seoul, South Korea, Friday, Dec. 21, 2018. The Trump administration's special envoy for North Korea on Friday expressed optimism about the diplomatic push to resolve the nuclear crisis, a day after the North issued a surprisingly blunt statement saying it will never disarm unless the U.S. removes what it calls a nuclear threat. (AP Photo/Lee Jin-man)

SEOUL, South Korea -- The United States' special envoy for North Korea on Friday expressed optimism about the diplomatic push to resolve the nuclear crisis, a day after the North issued a surprisingly blunt statement saying it will never disarm unless the United States removes what it calls a nuclear threat.

After a meeting with South Korean officials, Stephen Biegun said Washington was eager to move to the "next stage of discussions" with North Korea on denuclearization and setting up a second summit between President Donald Trump and North Korean leader Kim Jong Un, who first met in June. The leaders are trying to arrange another meeting for early next year.

Biegun did not directly address North Korea's recent statement, which jarred with Seoul's rosier presentation of the North Korean position and threatens to rattle a fragile trilateral diplomacy to defuse a nuclear crisis that last year had many fearing war.

While North Korea has insisted that U.S.-led international sanctions against the country should be removed before any progress in nuclear negotiations, Biegun reiterated Washington's stance that the punitive economic measures should be maintained until the North takes firmer steps toward irreversibly and verifiably relinquishing its nuclear arsenal.

Biegun said Washington was prepared to "explore a number of other things" that could build trust with North Korea and push diplomacy forward, but didn't elaborate what those were. He earlier said Washington was reviewing easing travel restrictions on North Korea to facilitate humanitarian shipments to help resolve the impasse in nuclear negotiations.

"The United States has no intention of easing our unilateral or United Nations sanctions," he said. "But we have a number of initiatives that we would like to look at as we begin the process of denuclearization of North Korea."

Biegun arrived in South Korea on Wednesday for a four-day trip to coordinate the allies' policies on North Korea, including the enforcement of sanctions. Biegun and South Korean officials also discussed the ongoing reconciliatory steps between the Koreas to reduce tensions, including a groundbreaking ceremony planned next week for a project to reconnect their roads and railways.

Biegun said U.S. officials will be working with their North Korean counterparts to set up the details of the planned meeting, but that they do not have a date or location yet to announce. U.S. Secretary of State Mike Pompeo hours earlier told a Kansas radio station that Washington still hopes Trump and Kim "will get together not too long after the first of the year and make even further progress on taking this threat to the United States away from us."

The latest North Korean comments could be seen as proof of what outside skeptics have long said: that Kim will never voluntarily relinquish an arsenal he sees as a stronger guarantee of survival than whatever security assurances the United States might provide. The statement suggests North Korea will eventually demand the United States withdraw or significantly reduce the 28,500 American troops stationed in South Korea, a major sticking point in any disarmament deal.

Kim and Trump met June 12 in Singapore where they agreed on a vague goal for the "complete denuclearization" of the Korean Peninsula without describing when and how it would occur. But North Korea for decades has been pushing a concept of denuclearization that bears no resemblance to the American definition, with Pyongyang vowing to pursue nuclear development until the United States removes its troops and the nuclear umbrella defending South Korea and Japan.