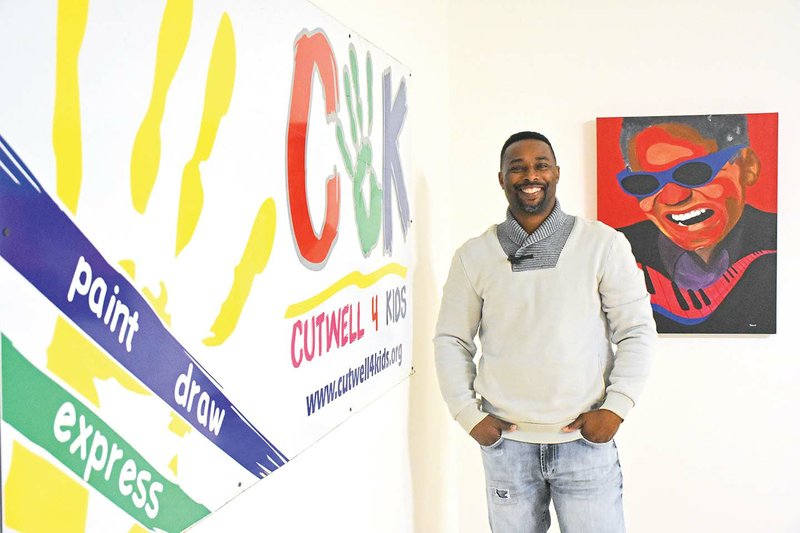 Anthony Tidwell of Hot Springs is the recipient of the 2019 Judges Recognition Award in the Arkansas Arts Council’s Governor’s Arts Awards program. He strives to help young people develop their artistic abilities through his nonprofit organization, Cutwell 4 Kids.

Anthony Tidwell, 47, is a barber by day but an artist and mentor at all times.

His work in teaching art to young people in his hometown of Hot Springs has resulted in special recognition from the Arkansas Arts Council’s Governor’s Arts Awards program. He is the recipient of the 2019 Judges Recognition Award and will be honored, along with other recipients, at a ceremony in the spring.

Tidwell is the founder of Cutwell 4 Kids, a nonprofit organization with the mission “to promote and support the self-awareness and growth of every child’s uniqueness and individuality in the form of artistic expression.”

“Children view the world around them with wonder and awe,” Tidwell said. “We believe in encouraging their natural curiosity.”

JoAnn Mangione, owner/publisher of The Springs Magazine in Hot Springs, nominated Tidwell for the award.

“As an artist and an educator, Anthony Tidwell started with what was considered an impossible dream,” Mangione said. “But through Cutwell 4 Kids, he has planted a seed that has earned broad community support and is impacting the lives of many creative young minds — kids who might not have otherwise found the opportunity for self-expression. He’s truly making a difference across the state.”

Tidwell said he was “touched just to be nominated.”

“I’ve never won anything in my life,” he said, smiling.

“When JoAnn called me and told me she wanted to nominate me, she told me she thought I deserved it. She showed me the letter she sent. … Just to see someone else put into words what I believe … what I do … was humbling. It was like winning the Super Bowl,” he said.

“I was thrilled when I learned I had won the award. I want to be an advocate for the arts,” Tidwell said.

“This award is going to bring more interest to the program … Cutwell 4 Kids … and to all who have helped me,” he said. “This is a stamp of approval for me and my program. This award makes it official.

“If I can help just one child … a child like I was … to use art as a coping skill, … a way to deter other harmful actions, … I will have succeeded. The next thing you know, these kids I am helping will be the ones winning awards. It’s good for everybody.”

Tidwell was born in Hot Springs but graduated from Morrilton High School in 1990. He first attended the University of Arkansas at Pine Bluff, but that did not work out for him. He returned to school later as an older adult and received a Bachelor of Arts degree in general studies with a focus on art and early-childhood education from Arkansas Tech University in Russellville.

He also has training as a mental-health paraprofessional. He has worked at Birch Tree Communities, where he assisted people with mental illness, and as an art teacher for the after-school program at the Arts Center of the Grand Prairie in Stuttgart.

Tidwell is a son of Alvin and Carolyn Tidwell of Hot Springs and Cozetta Ausler of Plumerville. Anthony Tidwell has three brothers and four sisters. He is a grandson of the late John and Eva Tidwell, whose 1940s-era building is now his art studio on Silver Street in the historic Langston Gardens area of Hot Springs.

“Cutwell” is a nickname Anthony Tidwell received in barber school.

“I guess they called me that because I cut hair well,” he said, laughing.

“I would always draw between haircuts,” he said, laughing.

Tidwell said he suffered a “very traumatic experience as a child.”

“I was living with my mother in Atlanta, [Georgia], during the time of the Atlanta Child Murders in 1979-81. That’s when approximately 29 children, teens and young adults were killed,” he said.

“During that time, me and my friends would walk down the street, saying, ‘He’s not going to get us.’ But he did. … Some of my classmates were among those killed. That was a scary time in my life. … I was in third or fourth grade. After my classmates were killed, I just quit talking. I was scared to talk,” Tidwell said.

“I had a teacher … he may have been a therapist … who encouraged me to draw how I felt. Bam … I started drawing. I’d draw a box of Fruit Loops or Tony the Tiger if I was hungry. That was just a way I found to cope,” Tidwell said.

“Drawing has helped me all through my life. If I have problems, I sit down and draw. … It helps me not to do anything I shouldn’t do,” Tidwell said.

“That’s what I want art to do for the children I teach,” he said.

“My dad never encouraged me to be an artist. … He always told me to ‘get a job. … You can’t support a family as an artist,’ … but now he understands,” Tidwell said. “My dad’s a carpenter. … He has always drawn house plans and sketched, but his father never encouraged him … to be artistic … told him he needed to get a job. My dad is now expressing himself with his art. He’s an artist, too, and has now accepted that.”

Tidwell is rebuilding his art studio, which was damaged last year by high winds during a storm.

“The winds took the roof off,” he said. “It rained in this building for six months. Now, my dad and I are putting this place back together on a retirement budget.

“This is the third time we have rebuilt this building,” he said, laughing. “It’s coming back better than ever. It will be ready by this spring.

“We are offering an after-school program this spring, but we can only accept 15 students. We will meet every Monday, and the class will be for kids 12 and under.”

During the summer, Tidwell opens his studio every Saturday to children “to come … free … and paint. Then we hold a fundraiser for them — Birth of an Artist — where they can sell their art,” he said.

“I never charge a child to paint … and don’t plan to. I have a very supportive board of directors who believes in our mission,” Tidwell said.

“I was a one-man band until the board officially took over when we received our nonprofit status in 2014. I was all over the place, but they now do the administrative work for me,” he said.

“I always wanted to be an artist. Even when I went to UAPB, my art instructor saw it in me, but a lot of people deterred me from becoming an artist. They said there was no income being an artist, so I learned to cut hair,” Tidwell said.

“A friend of mine showed me a haircut on TV … a designer haircut. You have to draw that, freehand, with clippers. So you have to have the image in your mind … just like an artist. I probably do at least one weekly,” he said.

“My clientele at Tim’s Barber Shop is diverse. I do not own that shop. … I just work there so I can support my habits … art and Cutwell 4 Kids,” Tidwell said.

“I am married to my high school sweetheart. Chandra and I were married in 1993,” he said.

“We have a son, Trevor, 22, who lives in Hot Springs and is a barber. He was the first student at Cutwell 4 Kids. He has used art to help him. He has had his artwork published in Scholastic Art magazine. Art has gotten him through some hard times,” Tidwell said.

“Our daughter, Kyndra Tidwell, 20, attends UAPB, where she is a member of the choir. That’s her artistic expression; she also likes decorating,” he said.

“I try to build relationships with kids and their parents,” he said. “We are all in poverty in this neighborhood. … A lot of the kids live with a single parent or their grandparents.

“But we have students from all over the area. We started with just the community kids … ones that might have had troubles at home. … They are underserved. I just want to fill that gap.”