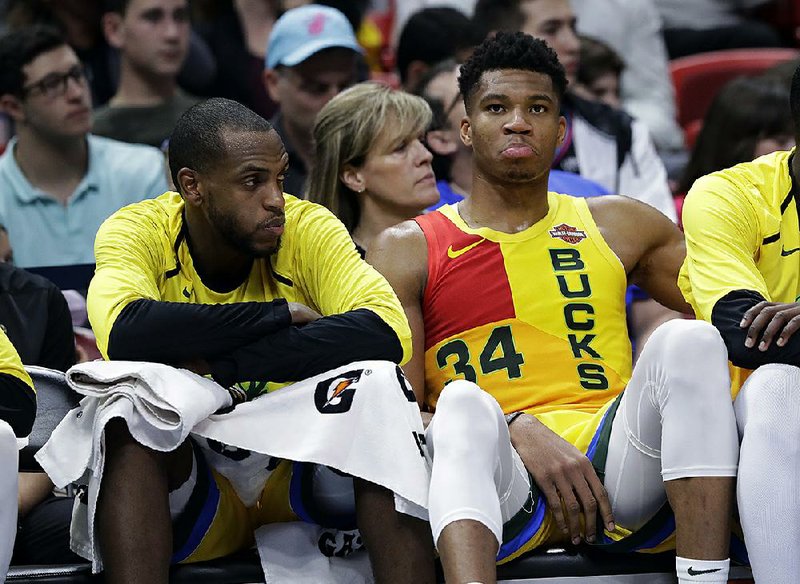 Milwaukee forwards Giannis Antetokounmpo (right) and Khris Middleton will join their teammates for the team’s first Christmas Day game since 1977 as the Bucks take on the New York Knicks at 11 a.m. Central today.

That was the last time the Milwaukee Bucks appeared on Christmas Day.

"It's been a while," Bucks forward Giannis Antetokounmpo said, knowing it was an understatement.

Their wait is over. At 11 a.m. in Milwaukee, noon in New York and 7 p.m. in Greece -- one of the 215 countries that will be seeing the NBA's Christmas games, and a basketball-crazed nation where fans will watch in droves to see their brightest star -- that will all change when Antetokounmpo and the Bucks visit the Knicks.

He knows the world will be watching.

"I always wanted to play in a Christmas game," said Antetokounmpo, the 24-year-old MVP candidate who is averaging 26.2 points per game this season. "When I came to the league I started watching it, and I wished and hoped that one day we can be there as a team to play a game -- and the day has come."

After the Bucks-Knicks tilt, it's Oklahoma City vs. Houston, Philadelphia at Boston, the Los Angeles Lakers against Golden State, and Portland visits Utah.

But no team has been waiting longer for an invite to the NBA's on-court holiday party than the Bucks, who haven't appeared in any of the past 120 games played on Dec. 25. There's no shortage of factors for that -- the league picks teams that drive ratings, teams that have superstars and teams that are coming off really good seasons.

Milwaukee has won two playoff series in the past three decades, and both of those were in 2001.

But with Antetokounmpo as a full-fledged star and one of the NBA's best records at 22-10, the Bucks and their best player are ready for their close-up.

"When you're a kid, you love the game of basketball, you love opening your presents, but you can't wait for these games to come on," said Miami's Dwyane Wade, who has been part of 10 victories on Christmas Day -- more than any other player. "Basketball on Christmas is like football on Thanksgiving. The whole world watches these games. The whole world is going to watch Giannis. When they put you on Christmas, you're marquee. You're a marquee name in the league."

There will be plenty of marquee names, including many members in the club of stars so bright they need only one name: LeBron, Steph, KD, Russ, Kyrie and now Giannis.

When the Thunder and Rockets square off, it will be a reunion of former teammates Russell Westbrook and James Harden -- the last two NBA MVPs. Joel Embiid and the 76ers will visit Kyrie Irving and the Celtics, the 551st meeting of those storied franchises. Then there's LeBron and the Warriors' glitzy lineup renewing acquaintances, and Blazers guards Damian Lillard and CJ McCollum getting to match wits with budding Jazz star Donovan Mitchell.

Every team on the lineup with the exception of New York has legitimate playoff hopes. New York playing on Christmas is a holiday tradition like few others in the NBA: The Knicks will be playing on Dec. 25 for the 53rd time, more than any other franchise.

The Bucks aren't feeling slighted in the least to be spending the holiday on the road.

"For the league to put you on Christmas Day is something that I think we all appreciate, and it's a little bit of an honor, and we're looking forward to playing in Madison Square Garden against the New York Knicks," Bucks Coach Mike Budenholzer said. "It should be a great game, great for the fans, great for our team, and our organization."

The game and the league have changed mightily since the Bucks' last Christmas appearance.

The NBA had 22 teams, including long-gone ones in Buffalo, Seattle and Kansas City -- which played host to Milwaukee on that day in 1977. Los Angeles had only one team. Washington's team was called the Bullets, the Jazz played in New Orleans, Larry O'Brien was relatively early into his stint as NBA commissioner, and the ink was still drying on the NBA-ABA merger. There wasn't even a three-point line.

Another big change since then: the globalization of the game.