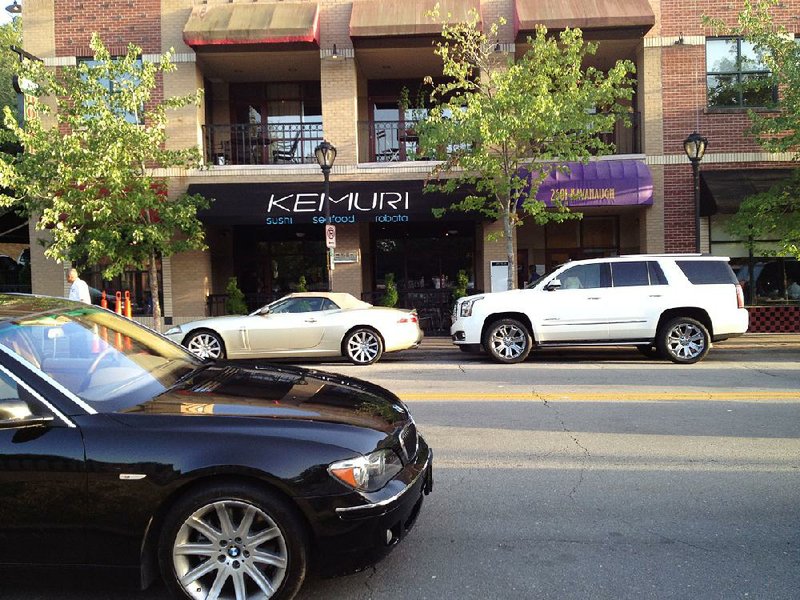 Details are still being kept tightly under wraps, but we've confirmed that Kemuri sushi, seafood, robata, 2601 Kavanaugh Blvd., in Little Rock's Hillcrest, is changing hands. Founder-owner Jerry Barakat, citing a nondisclosure agreement, confirms that he has sold the Japanese-Asian fusion restaurant, but not the identities of the buyers. He also confirms that it's not because the restaurant is successful, which it has been and is, but because his resources and attentions have recently been totally absorbed in the openings of the expanded Arthur's Prime Steakhouse and Oceans at Arthur's in their new locations in former car dealerships on Chenal Parkway and his longtime general manager, Manjeev Demel, is returning to his native Sri Lanka. Barakat opened the restaurant in August 2014 in the Ice House Center space that had previously housed, among other things, Ferneau.

Monday will be the final day of operation for Andina Cafe and Coffee Roastery, 433 E. Third St., closing out 23 years of operation in Little Rock's River Market District. Owner Nita Westbrook says the landlord's increasing by 50 percent her rent is the proximate cause, compounded by changes in the dynamic of the downtown area that have cut down on the amount of foot traffic at her establishment, which a few years ago expanded to include a bar area serving local craft brews. Andina, one of the original tenants of the River Market's Ottenheimer Market Hall, moved first from the east end-cap to the west end, and then to the Tuf-Nut building at Third Street and what is now River Market Avenue in 2011. Andina's phone number is (501) 376-2326. Meanwhile, Margaret McEntire, owner of the retail spaces in the Tuf-Nut building, denies that the issue has anything to do with the amount of Westbook's rent; that after extending Andina's lease for four months, to February, informed Westbrook that the lease would not be renewed. She also said Westbrook had not yet notified her she was closing down.

And speaking of Indian restaurants along the Rodney Parham corridor, "definitely by Jan. 20" is the new target for the opening of a franchise outlet of the Plano, Texas-based Bawarchi Indian Cuisine in the Market Place Shopping Center, 11121 N. Rodney Parham, Little Rock. The menu is still a work in progress, but it will be similar to the one you can find at the website, bawarchibiryanipoint.com, which features more than 30 versions of biryani (an Indian rice dish); vegetarian and nonvegetarian entrees; North and South Indian items (including several versions of the crepe-like dosa); and even "Indo Chinese" fusions of Indian and Chinese cuisine. The website also reveals that there is what looks like an outlet of a subsidiary chain, Bawarchi Biryanis, at 3404 S.E. Macy Road, Bentonville.

Au Tran, owner of That Ramen Place, in progress in a former candy-gift shop at 5711 Kavanaugh Blvd. in Little Rock's Pulaski Heights, says his target date to open is Feb. 1, that the menu will feature exclusively ramen plus a couple of Japanese bar-food items, and that he'll have a full bar. Tentatively, hours will be 10 a.m.-10 p.m. daily. The place does not yet have a phone number, website or Facebook page.

Umai Sushi has opened in the former J. Gumbo's space, 2050 John Harden Drive, Jacksonville. Appetizers include egg rolls, edamame, fried gyoza dumplings and miso and egg drop soups and cucumber, squid and seaweed salads; there's a surprising variety of fried rice options; and the sushi menu features nigiri and sashimi, a dozen and half classic rolls, 10 deep-fried rolls and nearly 30 special rolls. (Check it out at bitesquad.com/food/umai-sushi/25023.) Hours are 11 a.m.-2 p.m. and 4:30-8:30 p.m. Monday-Saturday. The phone number is (501) 457-7779. 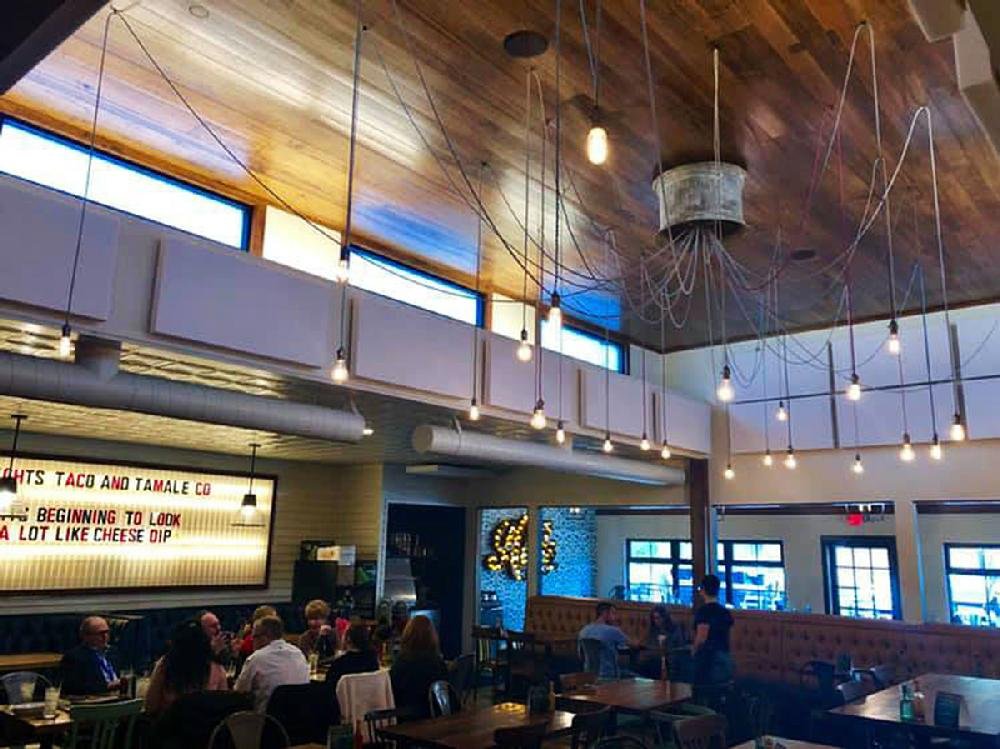 New sound-absorbing panels on the walls of Heights Taco & Tamale will cut down on the noise, something patrons have complained about for years.

Yellow Rocket Concepts honcho Scott McGehee, in a recent Facebook post, commends colleague Amber Brewer "and our team and the sound company we've been working with" for the addition of "vastly improved sound absorbing technology" -- specifically a set of sound-absorbing panels -- at Heights Taco & Tamale Co., 5805 Kavanaugh Blvd. in the next block west. Noise has been one of the prime issues we observed when it opened more than three years ago and complaints we've heard since about the establishment, and about its predecessor (the short-lived revival of Browning's); McGehee observes in his post that "It's no secret that the old construction of that building was very challenged in terms of sound. It was sometimes unpleasant when we were really packed."

We're not yet any closer to having the target opening date of The Daiquiri Shop in what had been the long-vacant Famous Dave's, 225 N. Shackleford Road, Little Rock, but our classified section for the past several weeks has carried an ad seeking to hire "Manager, Bar, Servers, Chefs and Cooks" for a west Little Rock "Cajun Food & Daiquiri Bar." (Email a resume to thedaqshack@yahoo.com.) We've previously reported that on Aug. 31 Kymberly A. Beard filed an application with the state Alcoholic Beverage Control Division for a "restaurant mixed drink minimum" permit for that location and had also received a similar permit for a New Orleans-style cafe and sandwich shop in the 2400 block of Broadway.

The Dairy Queen at 2014 Arkansas 5 North, Benton, opens at 10 a.m. Friday, following a ribbon-cutting with the Benton and Bryant chambers of commerce at 9:30. As usual, the first 100 people to buy a cake will receive one free Mini Blizzard every week for a year. What's new and different about this DQ: it has 84 fans and bar-top tables, and a year-round patio with a large outdoor fireplace and TVs. Franchisee You Scream Holdings LLC also has locations in Sherwood, Little Rock and Cabot "with more growth in central Arkansas planned," says a spokesman, and it will continue to host local fundraisers and free family-friendly events. Hours are 10 a.m.-11 p.m. daily. The phone number is (501) 575-6221. Visit dqarkansas.com.

Capo's Tacos opened Dec. 17 at 200 Higdon Ferry Road, Hot Springs, across the street from Oaklawn, a space that has previously housed barbecue and Cajun restaurants. Its Facebook page posting proclaims it as offering "Old School tacos in a new and exciting setting" from the Oseguera Family, which, we understand, is part of the same clan that operates La Hacienda in Hot Springs, Benton and Little Rock and Cotija's in Little Rock. Hours are 11 a.m.-9 p.m. Sunday-Thursday, 11 a.m.-10 p.m. Friday-Saturday. The phone number is (501) 623-8226.