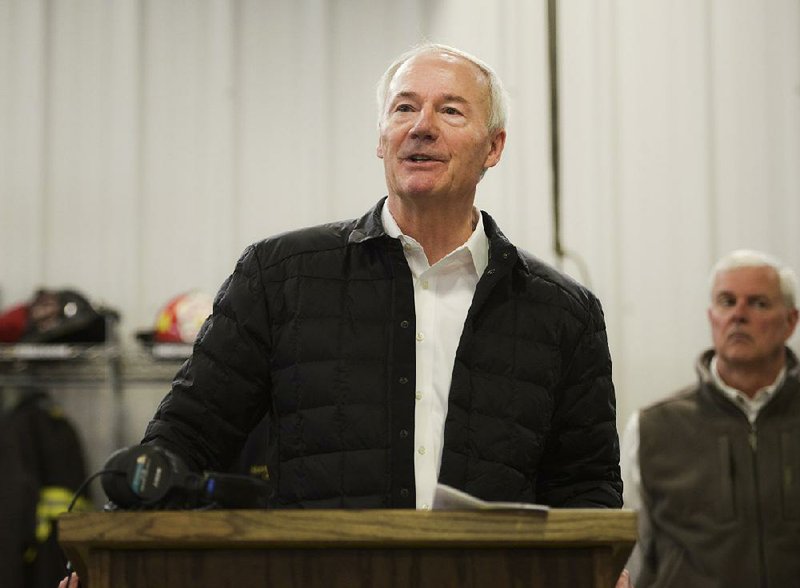 Declaring an emergency over the underground fire in Bella Vista, Gov. Asa Hutchinson said of efforts to extinguish it: “We are going to start the action on it, and we are going to get it done right.”

BELLA VISTA -- Gov. Asa Hutchinson pledged close to $1 million Friday to start the process of extinguishing an underground fire that is making the air around it unhealthy to breathe.

Hutchinson and a delegation consisting of local, state and federal officials toured the burning dumpsite on Trafalgar Road for about 30 minutes Friday, then held a news conference at Bella Vista Fire Station No. 2.

The fire station is about a quarter-mile from the dumpsite, and smoke from the fire permeated the station.

For 13 years, the fire site was a stump dump owned by the Bella Vista Property Owners Association, which used it for disposing of tree stumps and yard waste.

More than 75 people turned out for Friday's news conference. Some wore filtration masks.

The Arkansas Department of Health said Dec. 12 that preliminary results of monitoring near the fire showed air quality in the "unhealthy" category, according to a news release. Everyone within a half-mile of the 8000 block of Trafalgar Road was cautioned to avoid prolonged or heavy exertion outdoors.

The delegation was met by applause when it entered the station area. One woman in the rear yelled, "Thank you." The governor said last week that the state would help pay to extinguish the fire but did not say how much money would go toward it.

Hutchinson said of the fire Friday that he was declaring an emergency and would sign the declaration next week. Issuing the declaration will help cut through government red tape, he said.

The state has contracted with EnSafe, an environmental engineering firm from Memphis, to begin to remediate the site. EnSafe provides environmental, engineering, health and safety, and technology solutions, according to its Twitter page.

No timetable for putting out the fire or details about how the fire will be extinguished were discussed Friday, but EnSafe and the Arkansas Department of Environmental Quality are to work together on the plan.

The state's initial allocation will be $990,000, Hutchinson said. The money will come from a state fund that has $8 million and is used to help clean up hazardous and problematic sites, he said.

"This is an expensive project, and it's going to deplete the fund we have set aside," Hutchinson said.

Womack sympathized with residents who have been affected by the smoke that continues to billow from the site.

"This is a tough, tough issue with a lot of innocent victims," he said. "It probably started out as a quality-of-life issue. It is now a life issue."

Womack, like Hutchinson, stressed that extinguishing the fire "won't happen overnight and won't be cheap."

Ernie Curtin, who lives about a quarter-mile from the dumpsite and was at the news conference, said he wanted to hear more about what was being done to remedy the situation.

"I wanted to hear it from the horse's mouth," he said. "There is a lot of back-and-forth on Facebook. There are a lot of upset residents. They have their perspectives."

Curtin said the smoke is worse on cold days. Fire Chief Steve Sims said there was more smoke and steam associated with the fire Friday than in previous days. Sims attributed that to cold weather -- temperatures were in the high 30s -- and recent rainfall.

"When you get up in the morning and smell smoke, it effects your family," Curtin said.

Also, the fire could have an economic impact on the city, he said.

"Who is looking at trying to buy a house in this neck of the woods?" he said. "And, if you're tying to sell, you're stuck."

Firefighters were initially dispatched to the area July 29, where they spotted smoke and what appeared to be the remains of a brush fire, Sims said. There were no controlled burns listed in the dispatch log, he said, and the property owner denies burning brush there.

Tom Judson, the Bella Vista Property Owners Association chief operating officer, previously said the association operated the stump dump on leased land starting December 2003 until the end of 2016 when the dump was covered with soil.

The dumpsite property is now owned by Brown's Tree Care.

Nobody monitored the site in the last few years it was open, Judson said, but staff members would remove trash when possible.

Fire Department personnel have said the fire may be burning 50 or 60 feet underground.

The EPA has done air-quality testing along Trafalgar Road. The testing, called particulate matter monitoring, measures the amount of solid and liquid droplets -- such as ash, dust and smoke -- found in the air. The amount of particulate matter in the air provides a snapshot of air quality and how it may affect health, according to the state Health Department.

The EPA collected 24-hour air samples from five locations around the tree care property Oct. 1 and Nov. 10. The agency tested for hundreds of chemicals associated with landfill fires that potentially contain construction debris, household waste or tires. None of the air samples showed elevated concentrations of chemicals of concern, according to the EPA.

The EPA also collected samples from the property and found a low level of benzene on Nov. 10, according to an EPA release. The American Cancer Society says benzene is a colorless, flammable liquid that has a sweet odor and evaporates quickly when exposed to air. The chemical is a natural part of crude oil and gasoline, and is used in detergents, drugs and pesticides.

Stuart Spencer, associate director of the office of air quality at the Arkansas Department of Environmental Quality, told residents at a Dec. 1 meeting that the presence of benzene suggests there is trash in the former dump and not just yard waste.

Curtis and Tiffany Macomber, who live near the dumpsite, have sued Brown's Tree Care and John Does 1-3 in connection with the fire. The lawsuit was filed in Benton County Circuit Court. It says that continued smoke from the site has created a hazardous situation for the Macombers and their children. 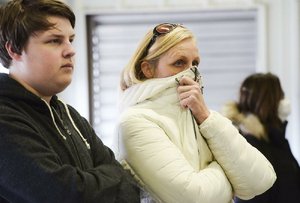 Photo by Charlie Kaijo
Robert DeCelle and Jennifer DeCelle wait at the Bella Vista Fire Department for an announcement from state officials about efforts to put out an underground fire in the town. 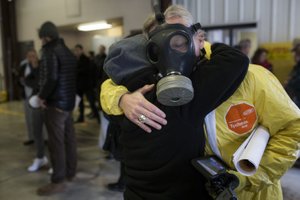