At White House, Trump invites Democrats 'over' to make a deal 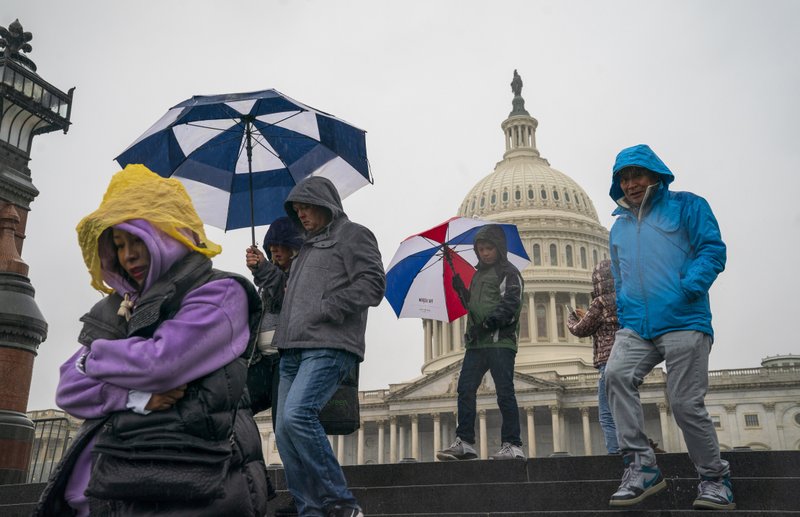 WASHINGTON -- President Donald Trump said Saturday that he was "in the White House waiting for the Democrats to come on over and make a deal on Border Security" as the partial government shutdown entered its second week.

Trump is holding out for billions in federal funds for a border wall between the U.S. and Mexico, which Democrats have said they are intent on blocking.

Democrats have said they will pass legislation restoring the government after they take control of the House on Thursday, but Trump and the Republican-controlled Senate must agree to go along with it.

Meanwhile, the Environmental Protection Agency, which had the money to function a week longer than some other agencies, implemented its shutdown plan at midnight Friday.

EPA spokesman Molly Block said many of the agency's 14,000 employees were being furloughed, while disaster-response teams and certain other employees deemed essential would stay on the job. That includes workers needed for preventing immediate public-health threats at more than 800 Superfund hazardous-waste sites.

But federal flood insurance policies will continue to be issued and renewed, in a reversal prompted by pressure from lawmakers, said U.S. Sen. Marco Rubio, R-Fla.

The Coast Guard also will be funded, though a spokesman said operations are being scaled back during the shutdown to focus on search and rescue. Active-duty Coast Guard personnel are considered essential and remain on duty.

Chief Warrant Officer Chad Saylor, a spokesman, had said Friday that the Coast Guard's final paychecks of the year wouldn't be delivered. The Defense Department, which includes most branches of the military, isn't affected by the partial shutdown. However, the Coast Guard is part of the Department of Homeland Security, and many of its employees are working without the promise of a paycheck.

Late on Friday, a Coast Guard workforce blog said the service had found a way to pay its military workforce in a "one-time action."

Republican U.S. Sen. Susan Collins of Maine said 42,000 Coast Guard members nationwide are going to be paid for work performed before the government shutdown and will receive their paychecks on Monday.

Collins called the move "good news" on Twitter, where she'd earlier posted that it was "not fair" that the Coast Guard members wouldn't be paid.

An estimated 400,000 federal employees are working without pay, and 380,000 are furloughed, according to a congressional Democratic aide. That's out of a federal workforce of about 2.1 million.

The departments of Labor and Health and Human Services were among those already funded and unaffected by the shutdown. Mandatory entitlement programs like Medicare payments will continue.

Most federal workers, including those who were furloughed, were paid Friday after the White House budget office concluded that the checks reflected work they did before the shutdown.

If the standoff continues, all workers in the nine departments and dozens of agencies affected by the closure will miss their next paycheck on Jan. 11.

On Thursday, the U.S. Office of Personnel Management tweeted sample letters to help the affected workers negotiate with creditors and mortgage companies. One letter, meant for employees to send to their landlords, suggests "the possibility of trading my services to perform maintenance (e.g. painting, carpentry work) in exchange for partial rent payments."

"I think it's disgusting, candidly," Reardon said on New Day. He added, "It's wrong to treat human beings this way."

Critics also called the Office of Personnel Management's tweet tone-deaf for telling furloughed workers to "consult with [a] personal attorney" for legal advice.

However, supporters noted that the agency has offered similar advice for furloughed workers in the past, including in 2015 when Barack Obama was president.

On Friday, Trump issued an order to freeze federal employee salary rates at their current levels in 2019. In a statement, Reardon likened the order to "pouring salt on the wound."

"As if missed paychecks and working without pay were not enough, now they have been told that they don't even deserve a modest pay increase," Reardon said.

Trump's order was expected because he has advocated a freeze all year. It however was necessary under the law governing federal pay to prevent a large raise from taking effect by default because Congress was not making a decision regarding a raise.

Trump's order only applies to civilian workers. Military personnel, which are covered under a separate funding measure, will receive a 2.6 percent raise.

The order is not necessarily the final word. Even before the partial shutdown hit, one of the main Senate advocates for a raise, Sen. Chris Van Hollen, D-Md., had raised the prospect of attempting to pass an increase early in the new Congress that convenes Thursday, saying that "it should be the first order of business when we return."

Federal employee pay raises are effective with the start of the first full biweekly pay period of a year, which in this case will start Jan. 6, leaving little time for enactment of a raise by then. However, raises have been paid retroactively -- most recently in both 2003 and 2004, when final agency funding similarly hadn't been resolved until past the start of the new year. In both cases, a raise had been paid by default in early January but was overridden by a larger one contained in a later full-year appropriations bill.

The Senate initially approved a 1.9 percent raise for 2019 on a bipartisan vote, although it rejected a bid by Van Hollen and others to include it in a measure to temporarily continue funding for agencies whose regular budgets have not been enacted.

Federal employees have received annual raises in the 1 percent to 2 percent range in the years after an Obama-era pay freeze ended in 2013. Office of Personnel Management guidance on the new order says that employees would remain eligible in 2019, as they were in those years, for raises on promotion or on advancing up the steps of a pay grade.

The guidance notes that a freeze in effect since 2013 on salaries for senior political appointees is set to expire Saturday. Unless a law is enacted reinstating that freeze, those appointees would be due for catch-up raises covering the intervening years, it says. That would result in Cabinet members, for example, getting a 5.5 percent raise of nearly $11,000 to $210,700.

Information for this article was contributed by Zeke Miller, Jill Colvin, Lisa Mascaro, Juliet Linderman and staff members of The Associated Press; by Erik Wasson and Todd Shields of Bloomberg News; and by Michael Brice-Saddler and Eric Yoder of The Washington Post.

Print Headline: At White House, Trump invites Democrats 'over' to make a deal