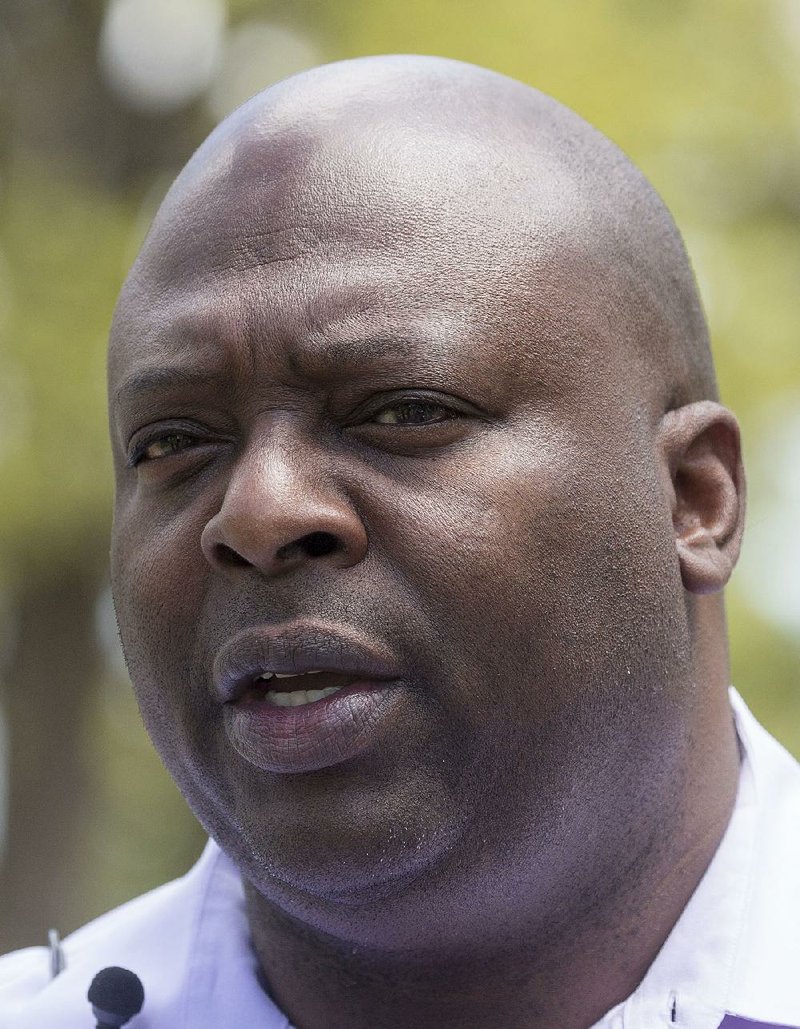 To the surprise of Little Rock officials, Police Chief Kenton Buckner is seeking to become the next chief of Charleston, S.C., less than four years after taking the helm of Arkansas' largest police force.

Charleston made the announcement in a news release Friday. Buckner did not return phone calls or text messages seeking comment.

The Little Rock Police Department put out a statement saying Charleston had asked candidates not to make public statements in order to "protect the integrity of the process." Buckner is one of five finalists and will visit Charleston next week to meet city leaders and continue interviewing for the position.

Little Rock City Manager Bruce Moore said Friday that he was taken by surprise when Buckner told him he was a candidate. Buckner told Moore before the news release was issued Friday.

"To be honest, I was surprised when he informed me. And we obviously didn't have a contract [designating the number of years Buckner would stay in Little Rock.] But my expectations were that he would be here a little longer," Moore said. "He and I, depending on whatever happens, are going to have some additional dialogue regarding moving forward."

Moore added that the Police Department "has a solid foundation" and will be fine whether Buckner stays or Moore has to find a new chief.

John Gilchrist, president of the Little Rock Fraternal Order of Police union, said Friday that he would be disappointed to see Buckner leave. Gilchrist said the union's relationship with Buckner has been the best out of all of Little Rock's police chiefs since Gilchrist joined the union's executive board in 1990.

Buckner had told Gilchrist a couple of days earlier that he is being considered for the Charleston position, the union president said. He said Buckner didn't tell him why he's looking for a job elsewhere but he has his own guesses.

"The Charleston Police Department is a smaller police department than Little Rock. It has a smaller population. ... So, you have to ask yourself, is this a true step up? Why would he consider something like this?" Gilchrist asked.

Buckner "is an exceptional speaker. He has a knowledge of police work that is very superior, and he has the ability to communicate very well. ... Why would a chief of his caliber look for something that doesn't on the outside look to be a step up? You've got to imagine that a black chief in a community that has a large African-American population, you've got to wonder what drives a man of that caliber out of this situation into something that may not be a step up," said Gilchrist, who is white.

Gilchrist said a small group of anti-violence advocates in the community have the ability "to politically interfere with the day-to-day operations of the Police Department."

The union's members also think Moore micromanages the department, Gilchrist said, although Moore has assured Gilchrist that the chief has authority to run the department without constant interference.

The Little Rock Black Police Officers Association, on the other hand, has been constantly critical of Buckner. President Rodney Lewis said Friday that association members aren't too concerned about Buckner seeking other career opportunities, although they expected him to stay longer in Little Rock.

In August, the association sent a news release rebuking the chief for not attending five anti-violence events over the previous four months organized by Victory Over Violence.

"He would rather travel on air planes than walk on our community blocks," the release said.

Buckner responded that his travel was necessary to improve the Police Department.

In 2017, he attended a three-week training course for senior government officials at Harvard University, spent five days in Atlanta at the National Organization of Black Law Enforcement Executives conference, participated in a police chief mentorship program in Mobile, Ala., and took multiple trips to Rhode Island as a board member of the Commission on Accreditation for Law Enforcement Agencies.

"Little Rock police is an agency that strives to be reflective of best practices, and you cannot achieve that by sitting in rooms and listening to yourselves talk," Buckner said at the time.

A month earlier, the black officers association accused Buckner of racial bias. They asked the city Board of Directors to investigate "discrimination, inequities and disparaging treatment of minority officers and supervisors" under Buckner.

In responding to criticism before, Buckner has said he's actively involved in the community, pointing to his Chat with the Chief forums that take place across the city each summer.

He sent out a four-page memo in response to the association's July request for an investigation into his discipline.

"Officers have the right to disagree with management decisions, but disagreement does not mean you have been the victim of discrimination," Buckner wrote.

Asked Friday if Buckner seeking employment elsewhere will put more of a strain on relations, Lewis said the association is willing to move forward.

"There's been disagreements between our organization and him, but he's the chief and we have to work with him on ways that we can improve our department and improve all the officers on the street, and that still stands," Lewis said. "Even if he doesn't get the job in Charleston, we still stand on our word to work with this chief and see if we can iron out the problems between our organization and him and the community."

Portions of Buckner's time in Little Rock have been defined by violent crime. A mass shooting at a downtown nightclub in July left 25 people wounded by gunfire, garnering national attention and prompting the creation of a joint task force comprised of local, state and federal agencies.

Less than a year before, Little Rock also made national headlines after the fatal shooting of 3-year-old Acen King, who was killed in a road-rage incident, police said.

Under Buckner's leadership, the department has put into place numerous efforts to calm violent crime in Arkansas' capital city. In the midst of a surge of gun violence last summer, the department announced a plan to increase patrols in high-crime areas, an effort that required officers to work mandatory overtime. The effort, officials have said, played a role in reducing the violence.

The Police Department, also under Buckner's leadership, participated in the Violence Reduction Network, a federal program that provided technical assistance, training and access to federal resources.

Through 2018, Little Rock police will be part of the Public Safety Partnership, a U.S. Department of Justice program designed to enhance support of law enforcement officers and prosecutors "in the investigation, prosecution, and deterrence of violent crime, especially crime related to gun violence, gangs, and drug trafficking," according to the U.S. attorney's office in Little Rock.

The Public Safety Partnership, according to the office, built on lessons learned from the Violence Reduction Network.