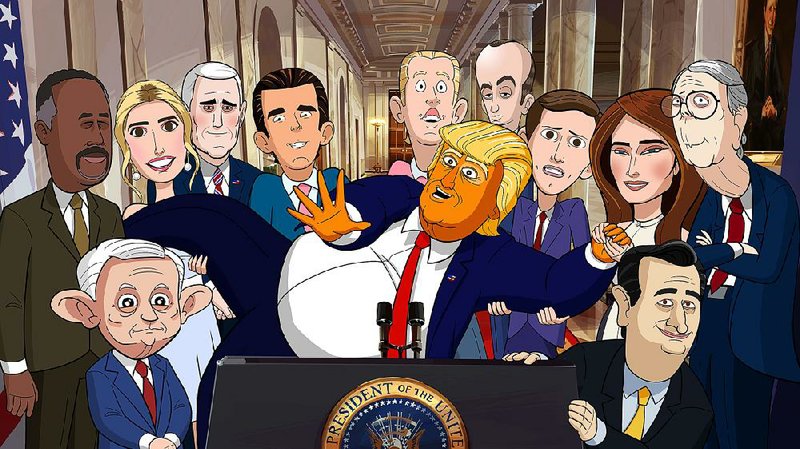 Once again TV proves its versatility with a couple of Showtime programs set in Washington that will delight some and disgust others.

How one receives them -- one new, one returning -- will depend on one's political proclivities. We'll begin with the new one that's aiming for humor.

The 10-episode series debuts at 7 p.m. today with back-to-back episodes. The series evolved from a recurring comedy bit on The Late Show that was developed into full half-hour episodes.

For those who don't stay up that late, Colbert has turned his nightly monologue into the premier platform for political satire skewering President Donald Trump's foibles. Colbert never seems to run out of material. Each night's monologue seems to write itself.

Using Trump's (reported) habit of downing a dozen Diet Cokes a day, his frequently bumbling, limited vocabulary, his often bizarre late-night Twitter habit ("negative press covfefe"), his being a hue of orange that does not exist in nature, and his seemingly insatiable appetite for self-aggrandizement, Colbert has a jolly time every night -- much to the raucous enjoyment of the studio audience.

I like Colbert. He's a funny guy. I enjoy a good political satire as much as the next guy, but sadly Colbert has become far too predictable -- and even boring on occasion -- with his ad hominem attacks. Trump is far too easy a target and Colbert's monologue sometimes comes across as facile.

Unlike the brilliance that was The Daily Show With Jon Stewart, with Colbert we may laugh, but we seldom learn anything new. These days, we have to turn to HBO's Last Week Tonight With John Oliver for more thoughtful political insight and pithy commentary.

Like radio's equally predictable and boring Chris Plante and Rush Limbaugh on the right, Colbert has carved out a cozy niche on the left and preaches to the choir each night.

Our Cartoon President is essentially an animated version of the mindset designed to delight those already on board the anti-Trump train. That's hilarious insight if you agree, and mindless, disrespectful, humorless swill if you don't.

In tonight's first episode we find a clueless Trump trying to revive his low approval ratings by delivering the greatest State of the Union speech in history. It's also his anniversary and he tries to strengthen his relationship with Melania by naming her the national bird.

Finally, the fine print in the credits notes, "This program is inspired, in part, by actual events and persons. Artistic license has been applied to the portrayals of real persons ... and may include fictitious satirical and parodied attributes."

That should keep critics from labeling the show "fake animation."

• Homeland, a much more dramatic take on Washington politics, returns to Showtime for 12 episodes of the penultimate Season 7 at 8 p.m. today. It's about to get dark. Really dark.

After Keane's inauguration, Carrie took a temporary job as Keane's liaison to the intelligence community.

The Season 6 cliffhanger: Carrie's mentor and former boss, Saul Berenson (Mandy Patinkin), and 200 members of the intelligence community are being arrested for suspected connection to the assassination attempt.

What's in store now? To avoid spoilers, I'll only comment on the official trailer that Showtime put out.

Carrie is going rogue and will try to take down the increasingly paranoid Keane and her tyrannical, civil rights-abusing administration.

Also gunning for Keane is radical right-wing media personality (think Alex Jones) Brett O'Keefe (Jake Weber), who says, "The founding fathers foresaw the dark day when we would face a president like her." He says this while using a Keane poster for target practice.

Joining the cast this season is Morgan Spector (Boardwalk Empire) as Dante Allen, an old friend of Carrie's who is looking into the hundreds of people Keane has detained.