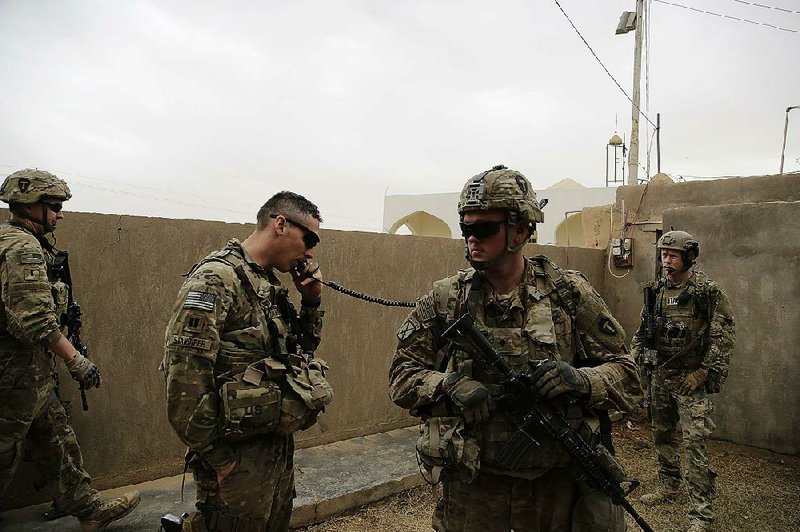 U.S. troops coordinate with Iraqi counterparts to launch airstrikes and artillery against the Islamic State from the town of Qaim, Iraq, in January.

QAIM, Iraq -- From their outpost on Iraq's westernmost edge, U.S. 1st Lt. Kyle Hagerty and his troops watched civilians trickle into the area after American and Iraqi forces drove out the Islamic State group. They were, he believed, families returning to liberated homes, a hopeful sign of increasing stability.

But when he interviewed them on a recent reconnaissance patrol, he discovered he was wrong. They were families looking for shelter after being driven from their homes in a nearby town. Those who pushed them out were forces from among their "liberators" -- Shiite militiamen who seized control of the area after defeating the Islamic State militants.

It was a sign of the mixed legacy from the United States' intervention in Iraq to help defeat the militants. American-backed military firepower brought down the Islamic State "caliphate," but many of the divisions and problems that helped fuel the extremists' rise remain unresolved.

The U.S.-led coalition, which launched its fight against the Islamic State in August 2014, is now reducing the numbers of American troops in Iraq, after Baghdad declared victory over the extremists in December. Both Iraqi and U.S. officials say the exact size of the drawdown has not yet been decided.

U.S. and Iraqi commanders here in western Iraq warn that victories over the Islamic State could be undercut easily by a large-scale withdrawal. Iraq's regular military remains dependent on U.S. support. Many within Iraq's minority communities view the U.S. presence as a buffer against the Shiite-dominated central government. Still, Iranian-backed militias with strong voices in Baghdad are pushing for a complete U.S. withdrawal, and some Iraqis liken any American presence to a form of occupation.

That has left an uncomfortable limbo in this area that was the last battlefield against the extremists. Coalition commanders still work with Iraqi forces to develop long-term plans for stability even as a drawdown goes ahead with no one certain of its eventual extent.

"Let's go win us some hearts and minds," Sgt. Jonathan Cary, 23, joked as he and Hagerty and the patrol convoy set off from a base outside the town of Qaim, evoking a phrase used in American policy goals for Iraq ever since the 2003 U.S.-led invasion that ousted Saddam Hussein.

After just a few hours moving on foot across farmland and orchards to a cluster of modest houses, Hagerty realized the families he thought were returnees to the area were in fact newly displaced. Their homes in Qaim had been confiscated by the government-affiliated Popular Mobilization Forces made up mainly of Shiite paramilitary fighters backed by Iran.

"Our end goal is a stable Iraq, right?" Hagerty said later, back at the base. "But when you see stuff like that, it makes you wonder if they are ever going to be able to do it themselves."

Along Iraq's border with Syria, the two Iraqi forces charged with holding a key stretch of territory lack direct communication. Because one force falls under the Defense Ministry and the other under the Interior Ministry, their radios are incompatible.

Instead, the troops use Nokia cellphones in a part of the country where network coverage is spotty to nonexistent.

At the nearby coalition outpost near Qaim, U.S. Army Lt. Col. Brandon Payne spends much of his time filling communications gaps by relaying messages between different branches of Iraq's military.

"The coordination is not where we hoped it would be," Payne said. "But they do talk to each other, and we see that as a sign of progress."

Tactical shortcomings within Iraq's military are partially what fueled the expansion of the coalition's footprint in Iraq in the past three years. As Iraqi ground forces demonstrated an inability to communicate and coordinate attacks across multiple fronts, U.S. forces moved closer to the fighting and sped up the pace of territorial gains.

Payne regularly shuttles between his base, Qaim and the Syrian border, meeting with different members of Iraqi forces to coordinate security and repel Islamic State attacks from the Syrian side.

"I would say we are still needed," Payne said. "We are getting great results with this model, but you see how much goes into it."