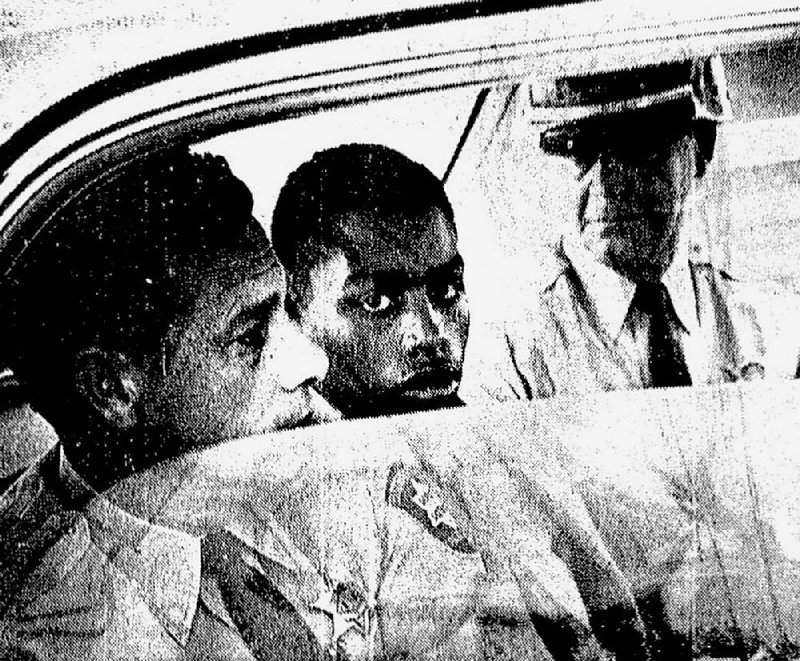 In this February 1964 file photo, Henry Montgomery is flanked by two deputies as he awaits the verdict in his trial for the slaying of Louisiana sheriff’s Deputy Charles Hurt.

BATON ROUGE -- A 71-year-old Louisiana inmate whose case led to a landmark U.S. Supreme Court decision on juvenile-offender sentences was denied parole Monday, more than a half-century after he killed a sheriff's deputy at age 17.

A three-member panel from the state parole board voted 2-1 to keep Henry Montgomery imprisoned. The hearing was his first chance at freedom since his conviction decades ago, and a vote to free him would have had to be unanimous. Montgomery now must wait another two years before he can request another parole hearing.

The Supreme Court's January 2016 decision in Montgomery's case opened the door for roughly 2,000 other juvenile offenders to argue for their release after receiving mandatory life-without-parole sentences.

Montgomery has served 54 years in prison for shooting East Baton Rouge Parish sheriff's Deputy Charles Hurt in 1963, less than two weeks after Montgomery's 17th birthday. Last June, a state judge who resentenced Montgomery to life in prison with the possibility of parole called him a "model prisoner" who seemed to be rehabilitated.

Montgomery's lawyers said he has sought to be a positive role model for other prisoners, serving as a coach and trainer for a boxing team he helped form at Louisiana State Penitentiary at Angola.

But the two parole board members who voted against Montgomery questioned why he hadn't accessed more prison programs and services that could have benefited him. One of the panelists, Kenneth Loftin, also said he was disappointed by some of Montgomery's statements during the hearing but didn't elaborate.

James Kuhn, the other board member who voted against Montgomery, noted that the Louisiana Sheriffs' Association submitted a statement opposing his release.

"One of the things that society demands, and police officers certainly demand, is that everyone abide by the rule of law. One of the rules of law is you don't kill somebody, and when you do, there's consequences," Kuhn said.

Montgomery told the board that he has asked for forgiveness from the deputy's family and from God.

"I'm sorry for all the pain and misery that I've caused," he said.

The board also heard from two daughters and a grandson of Hurt, all of whom opposed Montgomery's release. Hurt was married and had three children.

Linda Woods, his youngest daughter, said she and her sister met with Montgomery in prison last year and forgave him.

"But I do believe that justice has been done and he needs to stay there," Woods added.

Montgomery faced the board via video conference from prison. His lawyer, Keith Nordyke, said Montgomery was "stoic" but very disappointed with the panel's decision.

Nordyke said Montgomery completed every course required by law to be eligible for parole. However, during his first decades behind bars, prisoners at Angola were prohibited from taking any courses.

"He just did what people on the outside do every day, which is go to work and not get in trouble," Nordyke said.

Montgomery initially was sentenced to death after a jury conviction. After the Louisiana Supreme Court ruled that he didn't get a fair trial and threw out his murder conviction in 1966, he was retried, found "guilty without capital punishment" and automatically sentenced to life in prison without parole.

In 2012, however, the U.S. Supreme Court ruled that sentencing juvenile homicide offenders to life without the possibility of parole is unconstitutional "cruel and unusual" punishment. In January 2016, the justices made their decision retroactive, deciding in Montgomery v. Louisiana to extend its ban on such sentences to people already in prison.

In the court's majority opinion, Justice Anthony Kennedy said prisoners like Montgomery "must be given the opportunity to show their crime did not reflect irreparable corruption; and, if it did not, their hope for some years of life outside prison walls must be restored."

The decision ushered in a wave of new sentences and the release of dozens of inmates in states including Arkansas.

During Monday's hearing, Loftin asked Montgomery whether he remembered the shooting.

"Everything happened so fast, and I wasn't intending to kill nobody," Montgomery replied.