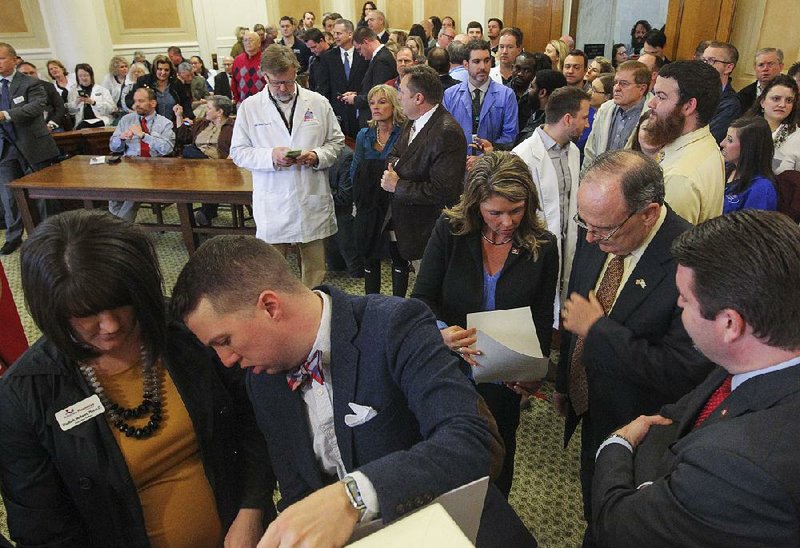 A state legislator said Wednesday that she'll drop her push to have reimbursement for pharmacists taken up during the ongoing fiscal session after Gov. Asa Hutchinson assured her the proposal she's working on will be considered in a special session.

"He looked me in the eyes, and I have to trust that," Rep. Michelle Gray, R-Melbourne, said, describing her meeting with the governor on Wednesday morning. "If I can't trust my governor to do what he says he will do, I might as well pack up and go home."

Hutchinson announced Monday that he would call a special session after the conclusion of the fiscal session to address pharmacy reimbursement and other matters.

In a statement Wednesday, he called the legislation that will be on his agenda for the session a "work in progress."

"I expressed to Rep. Gray that I'm committed to the pharmacy issue being resolved in the special session," Hutchinson said. "Everybody is working in good faith to develop the language. Once consensus is reached on the language of the bill, we will know what's going to go on the call."

Gray spoke at a news conference organized by the Arkansas Pharmacists Association to call attention to reimbursement practices by CVS Caremark, the pharmacy benefits manager for Arkansas Blue Cross and Blue Shield plans.

Gray and Sen. Ron Caldwell, R-Wynne, filed resolutions last week so legislation could be considered during the fiscal session; the legislation would require pharmacy benefits managers to be licensed by the Arkansas Insurance Department.

The department would verify that the companies have adequate networks of pharmacies, provide "fair and sustainable reimbursement" and don't provide financial incentives for patients to choose a particular pharmacy.

The proposal came in response to cuts in reimbursement to pharmacies for generic drugs provided to many Arkansas Blue Cross and Blue Shield customers, including Arkansas Works enrollees, that took effect Jan. 1.

Christine Cramer, a spokesman for CVS Health pharmacies, said the legislation "goes well beyond the regulation of PBMs and would eliminate the tools that help lower the cost of prescription drug benefits."

At the news conference, which drew an overflow crowd of pharmacists and others to the Old Supreme Court Room at the state Capitol, association chief executive Scott Pace said information on CVS Caremark's website showed it paid pharmacies owned by its parent company, CVS Health, an average of more than $60 more than it paid independent drugstores for about 270 common prescriptions.

Act 900 of 2015 prohibits pharmacy benefits managers from paying affiliated pharmacies more than they pay other pharmacies for the same prescriptions.

But he said CVS Caremark still pays chain drugstores more than it does independent pharmacies for the same prescriptions.

"Mounting challenges," including "declining reimbursements," make selling to CVS Health "an attractive and practical option," the letter says, according to an enlarged copy Pace displayed at the news conference.

He said the association supports the legislation being crafted by Gray and Caldwell.

In an email to the Arkansas Democrat-Gazette, Cramer said the company is "committed to providing our PBM clients and their members with a broad network of pharmacies that includes local, independent pharmacies."

She said the company is working on a "generic effective rate" for pharmacies that will "reimburse independents in Arkansas at a higher rate than larger national chains."