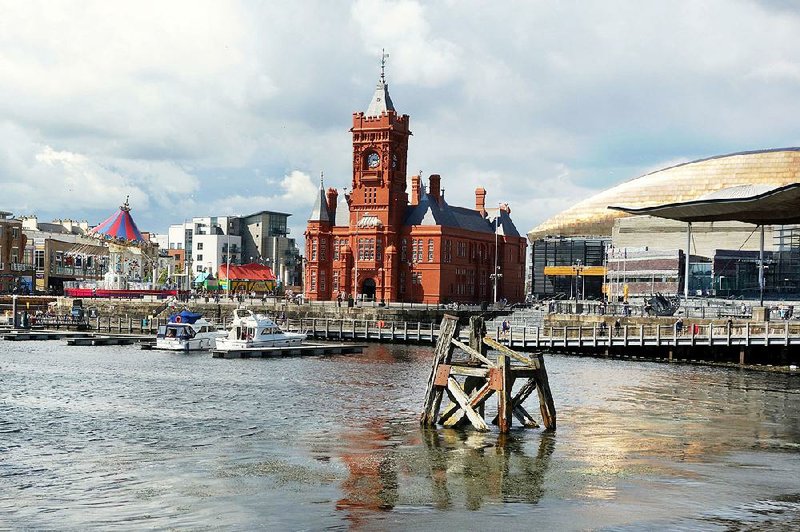 Just an hour from major English destinations such as Bath and the Cotswolds, spunky Cardiff offers a taste of Welsh flavors that will leave you with great memories.

Most travelers planning a trip to Britain don't realize you can hop a train in London and, in just over two hours, you're in Wales' revitalized capital. From there, you can easily side-trip to an open-air museum to experience Welsh-culture-on-a-lazy-Susan, or head into the lush Wye Valley to visit the romantic Tintern Abbey.

GETTING AROUND: Cardiff is walkable so the only public transit you’ll need is a bus or boat ride from downtown to the port; see cardiffbus.com or cardiffboat.com.

Cardiff, like so many Industrial Age giants, has re-emerged with fresh vigor from its time as a rundown, rust-belt city. Its castle has medieval intrigue as well as Victorian bling, its downtown is vibrant and its port -- which shipped 20 percent of the world's fuel when coal was king -- is now a delightful place to stroll.

While not on many bucket lists, underrated Cardiff (population 350,000) offers plenty of reasons to visit. Rugby and soccer fans know it as the home of Millennium Stadium (which has Britain's first fully retractable roof, and was the pride and joy of everyone in town on my last visit). Sci-fi fans know Cardiff as the place where Doctor Who is filmed. But the Welsh proudly view the city as their political and cultural capital. To savor the sights, stroll through one of the many impressive Victorian-era arcades burrowing through the city center, check out a smattering of museums and wander the impressively modern waterfront.

One of the town's top sights is Cardiff Castle, a fun complex that contains within its medieval wall bits of fortresses erected here since Roman times. It was the Normans in the 11th century who made the most impact, building a fortified tower (or "keep") on a man-made mound (a style known as "motte-and-bailey"). After rambling the ramparts and climbing the keep, you can also check out a WWII bomb shelter, an impressive Welsh military museum and some romantic, Victorian-era castle apartments that are not very historic but dazzling just the same. Rebuilt by John Crichton-Stuart, whose income from the thriving coal trade made him one of Europe's wealthiest men in the late 1860s, the rooms were turned into a whimsical, fantastical take on the Middle Ages. It's the Welsh equivalent of "Mad" King Ludwig's fairy-tale castles in Bavaria (built in the same romantic decade).

After this dose of history, head down to Cardiff Bay and the revamped Docklands area to discover Cardiff's most lively and thriving development. I like to get here by scenic boat from downtown, slowly ambling down the River Taff.

The one-time world capital of the coal industry, Cardiff was nicknamed "Coal-opolis" during the steam-powered Industrial Revolution when Welsh coal was recognized as the world's finest. But by the mid-1960s the last shipment left Cardiff and, like many blue-collar British towns, the economy slumped severely.

The Docklands have since been revitalized with state-of-the-art facilities (such as the impressive Wales Millennium Centre, built for the performing arts) that sit side by side with restored historic buildings and a futuristic government center called the Senedd.

Cardiff can also be used as a springboard to some of the most interesting sights in South Wales. Just 30 minutes away is St. Fagans National History Museum, the best look anywhere at traditional Welsh folk life. This 100-acre, open-air museum, currently in the midst of a $42 million renovation, has more than 40 carefully reconstructed and fully furnished historic buildings from all corners of Wales, as well as a "castle" (actually a Tudor-era manor house) that offers a glimpse of how the other half lived. The workshops here feature busy craftspeople eager to demonstrate their skills. Each house comes equipped with a local expert warming up beside a toasty fire, happy to tell you anything you want to know about life in this old cottage.

Romantics should consider seeing the beloved Tintern Abbey, immortalized in verse (by William Wordsworth) and on canvas (by J.M.W. Turner). Founded in 1131 on a site chosen for its tranquility, it functioned as a Cistercian abbey until it was dissolved under Henry VIII. Few ruined abbeys are as big, as remarkably intact and as picturesquely situated. Most of the external walls of the 250-foot-long, 150-foot-wide church still stand, along with its exquisite window tracery and outlines of the sacristy, chapter house and dining hall. The daylight that floods through the roofless ruins highlights the Gothic decorated arches -- in those days a bold departure from Cistercian simplicity.

Wales is often overshadowed by its neighbors England and Scotland, and South Wales is often passed over for the more dramatic castles and scenery in the north, but in the Cardiff region you'll get a great dose of history and a glimpse of its bright future -- all with a lilting Welsh accent. 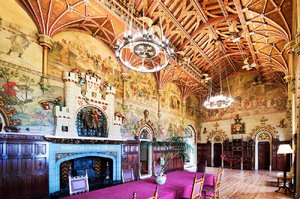 Photo by Rick Steves’ Europe/CAMERON HEWITT
The stunning Banqueting Hall inside Cardiff Castle is a Victorian fantasy of what a medieval dining hall might look like.