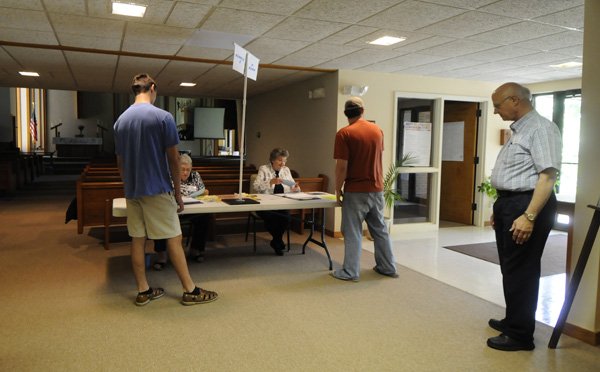 FAYETTEVILLE -- Voters in Washington County will have access to two new early voting centers, but two other centers will be closed, the election commission has decided.

The preferential primary and nonpartisan judicial and school board elections are May 22. Early voting begins May 7.

The changes are meant to increase accessibility for voters, particularly in southern Washington County, commissioners said.

St. John's, on Township Street, no longer wanted to be a voting center. Hazel Valley Community Church, on Hazel Valley Road east of Brentwood, no longer had poll workers, Price said. The Hazel Valley site had 161 registered voters, which is a low number, she said.

One voter complained about the Hazel Valley closing, said Justice of the Peace Ann Harbison, a Democrat representing southern Washington County. Closing that center is sad, she said, but with few voters and no poll workers, the commission had little choice.

The commission opened a center in West Fork, which will greatly help voters, Harbison said.

Another center will open in Elkins. Two centers will be open in Springdale, one in Prairie Grove and two in Fayetteville.

Opening new centers is a good thing for voters, said commission member Max Deitchler, a Democrat. Residents have more opportunity to vote than ever before, Harbison and Price said.

The county started using voting centers in 2015; voters can cast ballots at the county courthouse or any of the seven centers.

"Anybody can vote early anywhere," Harbison said. "It's really not like it used to be where you had to go to your precinct voting place."

The new voting centers should reduce voter wait time, which was a problem at some centers during the previous election, Harbison said. Commissioners said they may re-evaluate and consider opening or closing more centers after the May elections.

The seven voting centers will be open during the two-week period for early voting. Voters can also cast ballots in two places inside the courthouse. Numerous precincts will be open for voting on election day.

The voting centers have varying hours and days of operation. Information will be posted on the county's website after candidate filing ends Thursday, Price said.