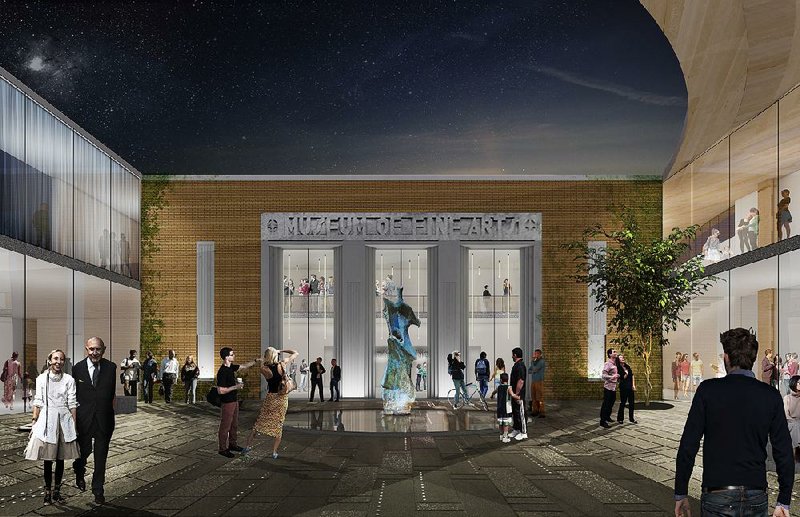 The Arkansas Arts Center on Tuesday revealed design plans for what is now an estimated $70 million overhaul, providing the first public glimpse of a public-private project that has been years in the making.

Portions of the 81-year-old, repeatedly upgraded Little Rock museum will be torn down, and the original "Museum of Fine Arts" facade -- built in 1937 and currently buried inside the facility -- will be uncovered and used as a new entrance facing East Ninth Street, architects said.

A walkway featuring natural light and clearer views will better link the remade museum's expanded art school, children's theater and gallery space, including a new second-floor exhibition area, the architects said. The path will connect the Ninth Street entrance with another that spills into MacArthur Park, where asphalt and parking spaces will be replaced by a new garden and cypress trees.

Officials referred to the walkway -- to be enclosed by glass panes covered by a wavy roof staggered to allow in sunlight -- as the new design's "spine."

"One main thing that it does is give a strong identity to the architecture and unifies the whole institution," said Jeanne Gang, owner and principal of Studio Gang, the project's lead architect. "Internally, it also helps to organize the space in a very logical way and a very functional way that will help the operations of the center and help visitors know where they're going."

Construction is scheduled to begin in fall 2019, and the redone museum is to reopen in 2022. During construction, the Arts Center will work with partners throughout Little Rock to offer existing programs in new places, Executive Director Todd Herman said. Details are still being worked out, including whether portions of the center will remain open, he said.

Gang and landscape designer Kate Orff of SCAPE Landscape Architecture gave a series of presentations Tuesday to city officials, museum staff members, volunteers, donors and the general public after the museum's board of trustees approved the plan without dissent. The presented design was a broad overview. Architects will now begin working on detailed drawings.

Originally scheduled for October -- the museum even mailed formal invitations -- the reveal was postponed so that the museum could square its wish list with the construction budget, Herman said.

The amended $70 million budget is a more than 50 percent increase from the original $46 million plan.

Architects realized the initial estimate was too low for the project's goals after conducting technical studies on the existing building and its previous modifications. Since its 1937 opening, the building has undergone eight expansions, the latest in 2001.

"It's a more expensive project than we originally thought it would be," Gang said. "You discover things. There's a lot to it. There's a lot of, also, ambition for the project to make it visible, to make it really bring the institution up to the next level."

Private money will cover the difference from the original cost estimate, and no new public money has been committed to the project, Herman said.

The design meets all of the center's goals, Herman said. Those priorities included a fuller connection to MacArthur Park; more visibility for downtown traffic; a new social gathering place to discuss art; and better exposure for the arts school and children's theater.

"Given that it's a puzzle and given we have these massive goals to meet, [the architects] have come up with an inspiring and creative plan that addresses each and every one of these with architectural significance," Herman said.

Plans include a second-floor, glass-enclosed "cultural living room" that, steps away from gallery space, will offer a view of the downtown skyline. A new family art adventure space and conservation lab also are planned.

All display galleries are planned for the second floor. Existing exhibition space will be converted into storage space and a new drawing research center, Herman said. The museum's current storage vault will become office space for administrators.

Roughly 127,000 square feet of space will be renovated or added, including the landscaping, officials said. The existing facility is about 108,000 square feet.

Gallery and art storage space will grow by about one-fourth of its current size, and the museum school will see a 50 percent space increase, Gang said.

The museum's existing side entrance, which leads to the atrium, will become the new loading dock; the existing dock facing Ninth Street will be removed.

It's not clear yet what will become of the Carrie Remmel Dickinson Fountain at the side entrance, but a new fountain will be built near the new Ninth Street entrance, officials said.

"In a renovation like this, in trying to make a building purposeful, there are some things that need to be rearranged," Herman said.

Although parking lots will be moved and torn up to allow for more green space near both museum entrances, the renovation will provide more parking spaces than the museum has now, Herman said.

Gang and Orff, who separately founded and run their businesses in male-dominated fields, are recipients of MacArthur Foundation "genius" grants. Both are graduates of the Harvard Graduate School of Design. Studio Gang has offices in Chicago and New York City; SCAPE is based in New York.

"We were separated at birth," Gang joked.

The new construction budget does not include soft costs, such as architectural and consultants' fees, or additional private money required to expand the museum's endowment to an appropriate size. This means the total project cost will be higher than $70 million.

Little Rock voters in February 2016 approved the sale of up to $37.5 million in general obligation bonds dedicated to the expansion. A 2 percentage-point increase in the hotel tax will pay down the debt.

The Arts Center does not expect to receive the full bond allotment, once fees and interest payments are taken out, and no other public money has been dedicated to the project, said Merritt Dyke, board of trustees president.

Officials initially said up to $50 million in private donations would supplement the bonds to cover project costs and increase the endowment to an appropriate size. The nonprofit Arkansas Arts Center Foundation owns the museum's artwork, controls the endowment and awards annual grants to the museum.

"We are continuing to raise money," Dyke said. "We've got some more work to do."

The Arts Center's contract with Studio Gang, signed last year, set total architectural fees at $6.4 million. Included in that sum are fees for the local architectural partner Polk Stanley Wilcox, SCAPE and other engineering and consulting firms. Because the construction budget is greater, those fees also will climb, Dyke said.

Little Rock owns the museum building, and city directors appoint trustees. The city gives $700,000 to the museum each year for maintenance.

Mayor Mark Stodola, who sits on the board, called the design a "splendid re-creation of a wonderful facility."

"We've got that worked out, so the sculpture will be coming to the Arts Center," Stodola told the crowd after it was pointed out that it appeared in a rendering of the renovated center. He later confirmed the move, saying the city worked out the details with the Metrocenter Improvement District.

The sculpture by the world-renowned British sculptor was purchased by the Metrocentre Commission and placed at Main Street and Capitol Avenue in 1978 as part of a pedestrian mall project. It was moved to its current location in 1999.

People who attended the public reveal were offered small bottles of champagne to take home and comment cards to return. Many spoke highly of the design.

Sarah DeLoach, 29, praised the planned additional space at the school, where she takes ceramic classes, and the way the museum will connect with its outdoor surroundings.

Gert Clark, 72, said she hopes the overhaul will make the museum comparable to Crystal Bridges Museum of American Art, the Bentonville museum founded by the Walton Family Foundation.

"I think it was fabulous," Clark said of the presentation. "I think the design is exciting."

Andrew Brock, 30, said a cocktail bar planned for the museum's second floor could draw more people to the Arts Center and that he was impressed by the scope of the redesign.

"It's a lot more involved than I was thinking," Brock said. 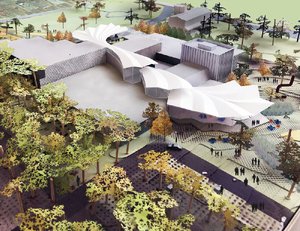 Photo by Special to the Democrat-Gazette/STUDIO GANG
Expansion and renovation plans for the Arkansas Arts Center in Little Rock include this covered walkway linking a new north-facing entrance at East Ninth Street and a south-facing entrance that looks out over MacArthur Park.