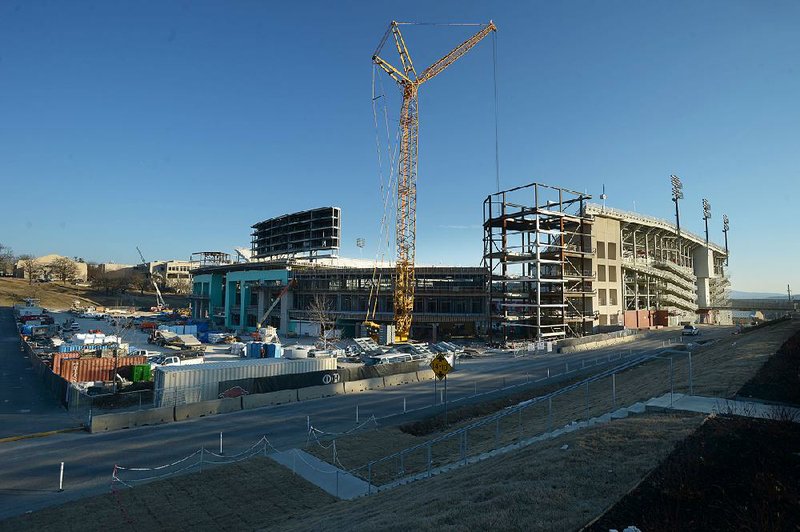 The University of Arkansas, Fayetteville in the past year released the Razorback Foundation from $12.7 million in pledges the nonprofit made to Razorback Stadium renovations and to debt from building the 4-year-old football operations center, officials said.

At least $5 million of the foundation's $12.7 million in commitments has been set aside for a potential land purchase, according to emails Hamilton exchanged with Razorback Foundation staff members last year that were obtained by the Arkansas Democrat-Gazette through open-records requests.

UA initially pitched to University of Arkansas System trustees in June 2016 -- three months before the board agreed to assume more than $120 million in debt, the largest ever for a higher education institution in the state -- that the school planned to use $10 million in the foundation's reserves to help pay for the $160 million project.

At the time, UA's athletic department pledged $10 million from its own reserves and the foundation had already received $20 million in donation commitments, specifically for the project.

The project will enclose the nearly 80-year-old stadium and raise capacity to about 76,000 by adding high-end suites on the east side of the stadium, outdoor loge boxes -- a cluster of four to eight seats separated from others by a partition -- other new suites and club seating.

"Are we all still on the same page that you will only request $5M from the RF [reserves] commitment, as opposed to $10M," Veteto emailed Jan. 9, using the nonprofit's initials. "The remaining $5M would be used for a potential purchase of land, if decided upon?"

UA granted the request in January last year and later knocked off the rest after the foundation beat its fundraising goal, said Scott Varady, the foundation's executive director. Expansion gift commitments now exceed $41 million, money that will be paid to the university over time, he said.

"Due to the success in securing commitments for the new suites and loge boxes, and the overall solid financial position of the Athletic Department, Razorback Foundation reserves will not be used for the stadium project as originally planned," Hamilton said in an email.

The Razorback Foundation, which maintains that it is independent of the university, serves as the athletic department's fundraising arm. Its income mostly comes from donations, including those required of fans who wish to purchase season tickets at the football stadium and other sports venues.

As of June 30, the foundation had $11.1 million in cash, according to its audited financial statements. The athletic department reported a fund balance of $13.7 million at that time, according to an Arkansas Department of Higher Education report.

The department -- which already has paid its full reserves commitment for the expansion -- will foot the remaining $2.7 million of the foundation's original $10 million commitment toward building the football operations center, which opened in 2013 and includes a practice field, locker rooms, equipment rooms and offices.

The foundation asked to waive the remainder of that commitment in early November, weeks before UA fired its head football coach and athletic director, triggering multimillion-dollar buyouts for which the foundation is responsible.

Emails about the financial changes were among those released to the Democrat-Gazette in response to an Arkansas Freedom of Information Act request for communication between more than three dozen public employees and the Razorback Foundation.

The request is part of an ongoing look at the day-to-day working relationship between UA and the foundation after the nonprofit refused to disclose records relating to the cost of the recent athletic department turnover.

UA spokesman Rebecca Morrison estimated the school would provide 20,000 pages of emails, which are being released on a "rolling basis" as officials redact information they believe is exempt under the law. To date, the university has provided more than 1,800 pages from the accounts of 11 employees.

Veteto mentioned in her January email to Hamilton that $5 million from the expansion commitment could be spent on a possible property acquisition. A separate email, from August, mentions an expected "5.8M purchase of [Ayrshire]." The former Ayrshire Electronics building is just west of the university's baseball stadium.

"The Razorback Foundation has discussed its interest in that property because it is located across the street from existing Razorback Athletic venues," said Varady, who did not respond to questions about its potential use.

A limited liability company called Beechwood III, referring to the street on which the property sits, owns the land. W. Brian Porter, who is Ayrshire's chief operating officer, is listed as Beechwood III's registered agent, according to the Arkansas secretary of state's office.

In its role as the assigner of seats at UA sports venues, the Razorback Foundation stands to receive additional cash each year through the stadium expansion, as it collects required donations from people who want to purchase season tickets for most of the 4,000 new seats and suites.

The foundation is contractually required to pay UA at least $12 million per year to designate seating. It can make the payment through three primary means: directly to UA athletics, to third parties on the university's behalf and through in-kind contributions.

UA sells tickets and receives that revenue. It withholds season tickets from fans who are not up to date on their foundation donations after receiving a list of delinquent fans, emails show.

The Razorback Foundation has raised an average of $21.2 million per year over the past six fiscal years through its "annual fund" -- the pool of money into which ticket donations flow -- according to an email Varady sent to Trustee Tommy Boyer in August.

Contributions to the annual fund earn donors "priority points" that are used to determine where they can sit in the university's stadium.

UA is not unique in requiring fans to donate money in order to buy season tickets. All the other 13 Southeastern Conference schools do the same, though it's not as clear how many characterize the funds as independent of the university, as is the case with the Razorback Foundation and UA.

The Razorback Foundation assigned seats at UA sports venues for "decades," Varady said. In 2002, the foundation paid $4.9 million per year for the right. It was set at $12 million in 2013 when the parties entered a new agreement.

The foundation and UA are not negotiating whether to increase the minimum annual contribution in light of the expansion, Varady said. University spokesman Mark Rushing said he's "not aware" of any plans to change the contract.

UA athletics brass first brought up the idea of closing off Donald W. Reynolds Razorback Stadium -- a wish-list item for years -- at the start of 2016.

Besides new suites and seats, the project will connect the concourse to the east and west walkways, install new elevators in the northeast and northwest corners and add a video board at the south end of the stadium.

It calls for renovating the Broyles Athletic Center, which is at the north end zone and will extend out into the parking lot, and for a new game-day locker room and a training room.

Six new luxury Founders' suites come with 30 tickets -- 24 seats and six standing-room-only -- and six parking passes for each home football game for 10 seasons, starting fall 2018, according to the license agreements that donors signed with the board. The 620-square-foot space will have a refrigerator, flat-screen televisions, induction burners, 16 fixed high-end stadium seats with chair backs and eight bar stool seats facing the football field.

Suite-holders will have access to the room -- and an attendant -- for three hours before and after games, as well as "golf cart transportation" from the parking spaces to the elevator towers. They will get an "express lane" to the suite and have access to the Founders' Club, a socializing space that will allow alcohol and have televisions and a sound system to hear the game broadcast.

UA, which had previously released names of suite-holders at Razorback Stadium and Bud Walton Arena, redacted names of the Founders' Suite license-holders.

"The University is in direct competition not only with other philanthropic organizations but also with all sports and entertainment venues (not just those in the immediate area) because the donors with the financial resources to support the University's stadium initiative by obtaining a suite are not limited by geography," wrote Morrison, the UA spokesman. "Thus, the University is competing for suite holders with pro and semi-pro teams like the Memphis Grizzlies, St. Louis Cardinals, Kansas City Chiefs and various other NFL teams."

Varady would not say Friday how much the Founders' suite-holders had to donate to be eligible for the top-level rooms, though former Athletic Director Jeff Long wrote to trustees that the Founders' suites would include "$3M+ commitments" over five years for a decadelong hold.

The foundation leader has told WholeHogSports.com, an online publication of the Arkansas Democrat-Gazette, that each of the other new suites require a seven-year commitment and donation of $3,700 to $4,100 per seat each year. The new suites will accommodate between 18 and 30 people, the website reported.

As of this month, UA reported all suites as sold, along with 63 of 70 loge boxes -- all of which have contributed to the $41.5 million in expansion fundraising. The university also received 627 deposits for north-end club seats, it said.

The stadium renovations are on budget and on schedule for a Sept. 1 debut, Hamilton noted, adding the contractor has a guaranteed maximum price of $132 million.

"The project is being completed over a 2-year period, during which the project team is actively working to maximize the construction schedule and stay within a project budget," he wrote. "At the same time the Razorback Foundation has worked diligently with donors on gift commitments and payment schedules.

"There is an appropriate line of communication between the Department of Athletics and the Razorback Foundation, to ensure all information and any project update is appropriately communicated, and that any change in cash flow projections are in line with the financing plans for the stadium project."

In a presentation updated this month, UA said it paid $63.4 million in project costs as of Dec. 31. 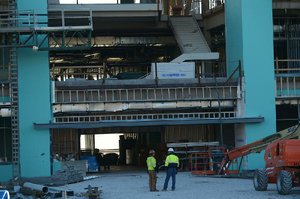 Photo by Andy Shupe
New elevators, a concourse connecting the east and west walkways and a video board for the south end of the stadium are among items in the project to virtually enclose Razorback Stadium and add more suites and seats. 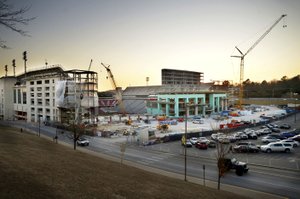 Photo by Andy Shupe
Construction continues Wednesday, Jan. 3, 2018, at Razorback Stadium on the University of Arkansas campus in Fayetteville.