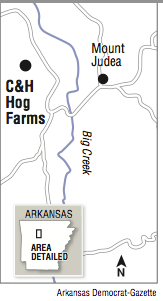 A map showing the location of C&H Hog Farm

Sunday was the 640th day since C&H Hog Farms applied for a new permit for its Mount Judea concentrated animal feeding operation, and it remains unclear when the farmers will learn the outcome of their request.

C&H, which abuts a Buffalo River tributary in Newton County, has been operating on an indefinite extension of its expired permit, which falls under a different regulation and stipulates different numbers of hogs.

The new permit indicates the facility would house up to six boars of about 450 pounds each, 2,672 sows of at least 400 pounds each and 750 piglets of about 14 pounds each. It also estimates two waste-holding ponds would contain up to 2,337,074 gallons of hog manure, similar to what is contained now. Additional waste and wastewater would be applied over certain sites as fertilizer.

While C&H has altered the number of hogs it intends to keep on-site, officials don't expect a significant difference in the amount of waste the animals will produce.

C&H has become the target of groups that fear its presence is an environmental risk to the Buffalo River. The river attracted 1.8 million tourists in 2016, and C&H's proximity to the river has caused a stir among people concerned manure from the farm -- the largest hog operation ever to operate in the county -- could make its way into the Buffalo and pollute the water.

The Arkansas Department of Environmental Quality received more than 1,000 comments in response to the permit application, the first time opponents of the farm have had the opportunity to comment on its continued existence. Opponents have said lax notification rules of C&H's original permit kept people from opposing its construction in the first place.

C&H's operators applied April 7, 2016, for an Arkansas Pollution Control and Ecology Commission Regulation 5 National Pollutant Discharge Elimination System permit for liquid animal waste systems. The current permit is a Regulation 6 permit, which is similar but has different notification and periodic renewal requirements. The department has decided to discontinue issuing the Regulation 6 permit.

The Arkansas Department of Environmental Quality then spent months before the Pollution Control and Ecology Commission's administrative law judge litigating a permit approval for a facility to spread manure from C&H. After the permit approval was upheld, and nearly a year after C&H applied, the department gave preliminary approval to the application.

State Rep. Jeff Wardlaw, D-Hermitage, introduced a bill Feb. 10 that would require the department to issue a preliminary decision within 120 days of receiving a new permit application or permit modification for a liquid animal waste system. After the subsequent public comment period, the department would have 60 days to issue a final decision.

"It's not business-friendly for them to take that long to decide on a permit," Wardlaw said. "That's the bottom line of why I ran and supported the bill."

He said many constituent permitting experiences inspired him to support the bill. He called the 21 months that have elapsed without a decision on C&H "ridiculous."

Because C&H had already applied for its new permit, the facility is not subject to the new law.

Department of Environmental Quality spokesman Donnally Davis said the C&H permit is still under review. He did not specify what more the department needs to do before it can issue a decision.

The department requested geological site investigations conducted at the facility; construction plans for its waste management system; information related to the facility's nutrient management plan, including which water bodies are located nearby; status of the facility's manure storage ponds; and the operation and maintenance plan for the ponds levee.

C&H's response documents are available on the department's website, searchable through the facilities and permit database.

C&H operators had been given 90 days, from Sept. 19 to Dec. 18, to provide the information. On Dec. 6, they asked for a 90-day extension, but the department gave them only 10 days, arguing the original 90 "should have been more than sufficient time" to answer the department's questions.

Farm operators did not return phone and email messages left by the Arkansas Democrat-Gazette seeking comment.

"It seems peculiar to me that they are allowed to operate indefinitely with an expired permit," said Gordon Watkins, president of the Buffalo River Watershed Alliance, a group formed in 2013 to oppose C&H Hog Farms.

Watkins noted many things seem to be happening at once with C&H Hog Farms.

While the merits of C&H have been debated publicly for going on five years, recently C&H's operators have explored expanding their hog production.

Co-owner Jason Henson and representatives from JBS Live Pork, which supplies the hogs to C&H, held a public meeting in Clarksville in October about a proposed 5,200-sow facility with additional hogs in a flood-prone area of Johnson County. They said it would not replace C&H Hog Farms.

No permit application has been submitted for that facility.