Bitcoin machine in downtown Little Rock is first in state 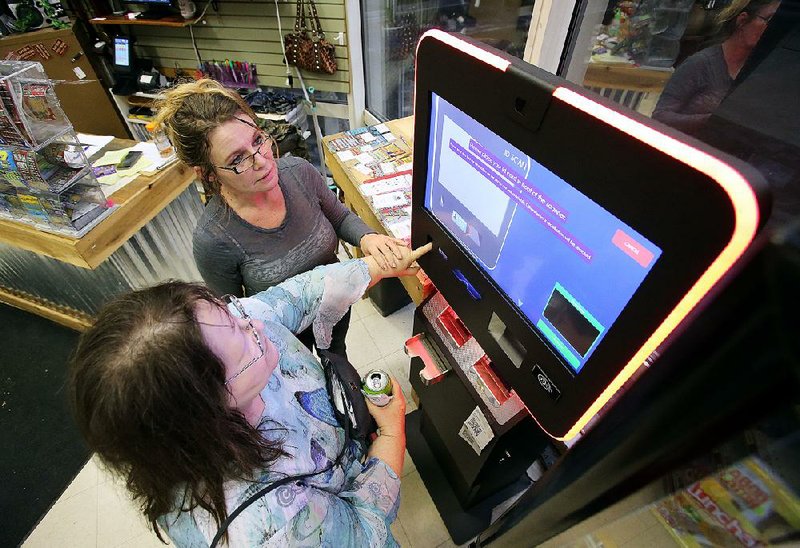 Connie Davis (top) helps Linda Alvis set up a bitcoin account Wednesday at the Corner Store and More in the Simmons Tower in Little Rock.

Next to a lottery machine in Arkansas' tallest building sits the first bitcoin machine in the state.

The machine has drawn attention since November when it was placed in the Corner Store and More on the ground floor of the 40-story Simmons Tower in downtown Little Rock.

The machine is owned by Freedom Coin Inc., which has an office near the Simmons Tower.

Before starting Freedom Coin, Sweeney, 29, worked at the National Center for Toxicological Research near Pine Bluff. He later went to work full time with Freedom Coin. Surrett, 30, is also a tax preparer. The two met as students at the Arkansas School for Mathematics, Sciences and the Arts in Hot Springs.

As it is defined on the official bitcoin.org website, bitcoin is an "innovative payment network and a new kind of money."

Bitcoin exists virtually as bits of computer data. The Freedom Coin machine takes cash and spits out only paper receipts. Transactions of the virtual currency are also common using smartphones or personal computers. Bitcoin can be redeemed for cash, or used to make purchases from some online businesses.

A bitcoin purchase from the machine requires a minimum investment of $100. If the investor is registered with Freedom Coin, there is a 9 percent fee and if they are not registered, the fee is 12 percent, Davis told Greg Duszota, an interested customer last week.

"I've been looking into it, but I haven't purchased [a bitcoin] yet," said Duszota, a former financial adviser.

Customers aren't required to buy a full bitcoin but can purchase a fraction of the cryptocurrency. Transactions of up to about $10,000 have been handled on the Simmons Tower machine.

Bitcoin is backed by public transactions, with all transactions recorded publicly, Duszota said.

When Sweeney and Surrett placed the bitcoin machine in the Simmons Tower around Thanksgiving, a bitcoin was selling for about $8,000. The price was up about 85 percent to about $14,700 on Tuesday.

Sweeney and Surrett also sell two other cryptocurrencies through the machine, ethereum and litecoin.

In November 2017, the U.S. Commodities Futures Trading Commission gave its approval for bitcoin futures to be traded on the Chicago Mercantile Exchange and the CBOE Global Markets Exchange. Bitcoin futures trading started a few weeks later, on Dec. 11. There have been published reports that the Nasdaq exchange has plans to open a futures market for bitcoin and other cryptocurrencies.

"I think the popular consensus is that [futures trading] stabilized the price," Sweeney said.

Some critics have described bitcoin as illegal, or a scam.

"It's as legitimate as our [U.S.] currency," Duszota said.

But there remain concerns about bitcoin and other cryptocurrencies.

Bitcoin is like having a credit card with none of the protection of a credit card, said one stock analyst who asked not to be identified.

"You have zero fraud liability on a credit card transaction," the analyst said. "You can have a transaction reversed and have it credited back to your account if something goes wrong. The fraud protection on the bitcoin is not there. If you pay someone for a purchase and they don't deliver the materials, you have very little recourse to get it right. And it's very easy for a criminal to use it for money laundering and drug transactions."

At least two regulators -- the Securities and Exchange Commission and the Financial Industry Regulatory Authority -- have issued alerts warning investors to be cautious in buying cryptocurrencies, including bitcoins.

"Significant trading may occur on systems and platforms outside the United States," Clayton said. "Your invested funds may quickly travel overseas without your knowledge."

Therefore, risks can be amplified, including that regulators such as the SEC may be unable to pursue bad actors or recover funds, Clayton said.