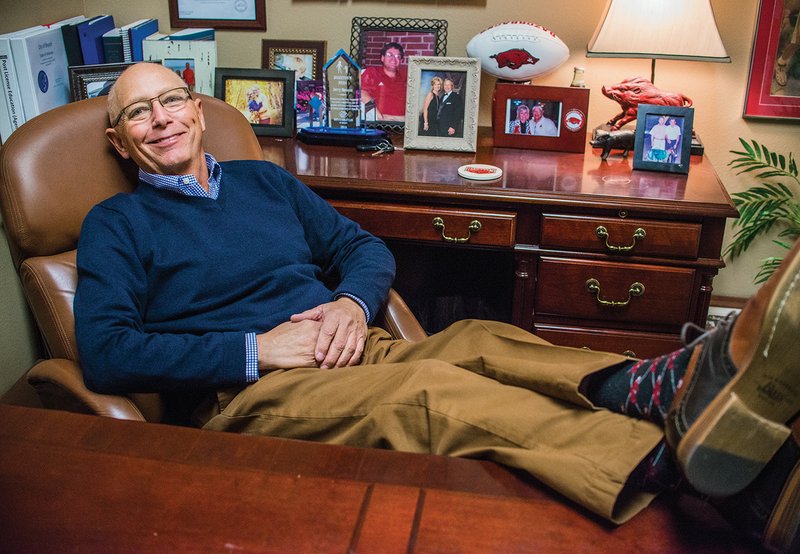 Bryant City Councilman Jerry Henson shows off his Arkansas Razorback socks in his office at Old South Realty in Benton. Henson, who was diagnosed with stage 4 liver cancer a month ago, was presented with the Charles Broadway Community Excellence Award on Dec. 19. ( William Harvey)

About a month and a half ago, Bryant City Councilman Jerry Henson was diagnosed with stage 4 liver cancer, and his doctors have given him just a few months to live — something he has already made peace with.

“I am just the most blessed person in the world,” Henson said. “People don’t understand how I can be at such peace, knowing that my days are short, according to the doctors.

“But there is a higher physician, and I have turned my case over to him. … [God] gave me about four months where I have felt better than in 15 years.”

Henson was awarded the Charles Broadway Community Excellence Award on Dec. 19, in part for his continued service to the Boys & Girls Clubs of Bryant.

“Jerry has given so much to our community in so many ways for a number of years and does so not seeking recognition for it,” Shane Broadway said. “He does it to help others and be a positive influence for kids in our community.

“My father would be very proud to know it was awarded to Jerry.”

Henson said that a span of four months prior to his diagnosis allowed him to truly enjoy his life.

“I think he gave me some good days in there. He let me experience feeling good again,” said Henson, who attends Indian Springs Baptist Church in Bryant. “Now I truly believe he feels like his work is done for me.

Henson also has short bowel syndrome, which means he can’t absorb nutrients and minerals from eating and drinking.

“I have had long periods where I have been fed through a tube,” he said.

Henson was placed on a new medication to grow cells that his body can absorb. The problem, Henson said, is that there was no way to know if “it was going to be good cells or bad cells.”

Henson believes the medicine was one of the leading factors in his cancer diagnosis, although it is not known for sure.

“They scan me quite often because of all the stuff that is going on [with my stomach],” Henson said. “I had a scan done four months ago, and I didn’t have a cancerous cell in me.

Henson said 585 people were involved in the trial for the medication he was prescribed, and three developed cancer after being on the drug for 14 months.

“Of those three, two of them were heavy smokers and died of lung cancer,” he said. “The other one was an alcoholic for 32 years and died of liver cancer.”

“We don’t know if this medicine caused anything for sure, but I believe it did,” Henson said.

Henson has been through three chemotherapy treatments since his cancer diagnosis, but he said they have not helped.

In 2001, Henson was diagnosed with diverticulitis and had surgery on his stomach to try to repair it.

“That surgery went badly, and since then, I have had 17 operations on my stomach,” he said. “I have been in and out of hospitals for months at a time for the past 17 years.”

He said that during that time, he would look up [to God] and say, “Why are you keeping me here? Why are you doing this to me?” Henson recalled. “I am on all this medication, and I have been here for weeks.”

But the whole time, Henson said, God “was using me to inspire and touch hundreds, if not thousands of people. From nurses to children at the club, that was his purpose for me.

“It was to use me to inspire and bring hope to others.”

Bryant Mayor Jill Dabbs said she is better for having Henson as her friend and believes “a countless number of others are as well.”

“Jerry embodies everything the Broadway award represents,” she said. “Jerry puts others’ needs before his own. He is a servant leader, he sees the best in people, he’s a peacemaker, and he wants the very best for his community and works hard toward that goal every day.”

Henson, who is in the middle of his second term as a City Council member, said he felt called to volunteer at the club after teaching a mentoring class for sixth- and eighth-grade boys.

“That’s when I knew that’s where I need to be,” Henson said. “Ever since then, I have worked really hard to get funding from the city, as well as the private sector.

“It takes a lot of money to run the Boys & Girls Club, and we have one of the top clubs in the nation, and we do it with less money than anybody.”

In 2017, the Boys & Girls Clubs of Bryant received the League of EAGLES (Engage Ask Give Lead Evaluate Serve) leadership award for the third year in a row.

“They are the first club in the state to ever get the national distinction,” Henson said. “That is big, if you think about all the clubs in the state of Arkansas.

“They serve more than 600 kids a day, and they do all this on a budget that is really unfair to the club.”

Henson has lived in Bryant for about 25 years.

“I have done some work on the council that I am proud of, but my goal is to leave Bryant a better place than I found it, and I think it will be,” he said.

“When I got that award, I was embarrassed, and I didn’t want to talk about it,” he said. “I didn’t realize I was doing anything. …

“… When I started receiving the recognition, then it became very clear what my purpose here was, and that was to touch other people’s lives.

“That is the legacy that I want to leave.”

Suzanne Passmore, chief executive officer for the Boys & Girls Clubs of Bryant, said the kids at the club just gravitate toward Henson.

“They love him,” she said. “He has a magnetic personality and genuinely cares about you. He really is like a hero when he walks through the door.”

He said that last year, he threw a birthday party at the club for a 12-year-old girl.

“She said she had never had a party before,” Henson said. “To hear this girl tell me how much she loves me and how much a difference I have made in her life, that’s enough for me.

“One child is enough, but I was blessed to [reach] more than just one.”

He said one of the reasons he has peace with his diagnosis is the recognition he has received from the city.

“It showed me that I have done good work,” he said. “There are people out there who do things for different reasons, and I had no idea what my purpose was, and it wasn’t until I saw the children down there [at the club] that I knew I had made a difference.”