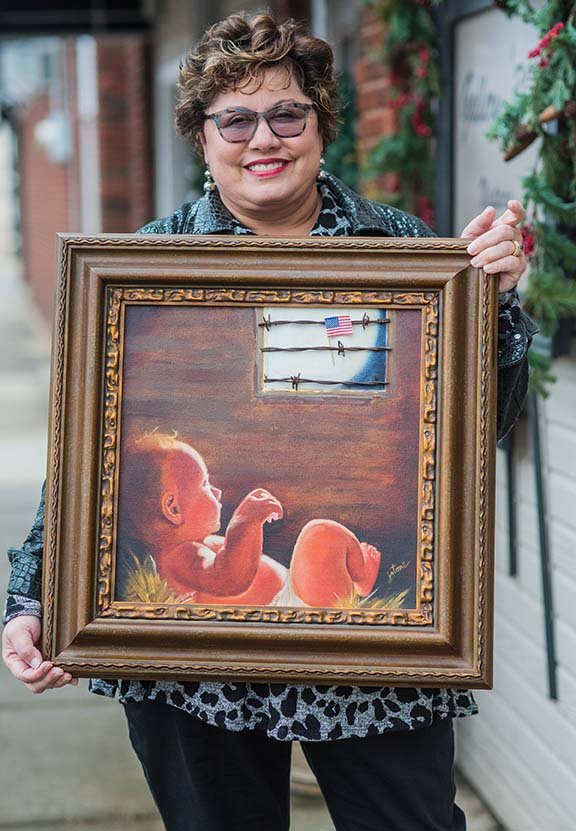 Russellville artist Jeannie Fowler Rodriguez Stone shows her oil painting No Room in America that she will exhibit in the upcoming political art show and performance event in Little Rock. Also a poet, Stone will read some of her own work Friday night.

Several area artists will participate in a pop-up visual art and performance event, One Year Down: Artists Reflect on the First Year of the Trump Administration, on Friday and Saturday at New Deal Studios, 2003 S. Louisiana St. in Little Rock.

Rachel Trusty of Conway, who teaches art at the University of Arkansas Community College at Morrilton, organized the event, which will feature poetry readings, as well as visual art. The event will be from 6-9 p.m.

Saturday, the one-year-anniversary of Donald Trump’s inauguration as president of the United States.

“The March on Arkansas and the Rally for Reproductive Justice will be at the state Capitol from 11 a.m. to 2:30 p.m. Saturday, so we are open for people to visit afterward,” said Trusty, who is a native of Russellville and graduate of the University of Central Arkansas and the Art Institute of Boston at Lesley University. “I’m excited that the show will open the night before these events and then be open afterward. The One Year Down exhibition is not officially affiliated with either the rally or the march, but I am excited to have this event during the weekend of positive events to begin 2018.”

Local artists participating in the event include Tommy Wallace and Don Byram of Conway and Jeannie Fowler Rodriguez Stone of Russellville.

Wallace, associate pastor at Family Life Bible Church in Conway, will exhibit a photo taken with his Smartphone. He titled the work I Stand on a Mountain Lamenting.

“I am not so much political as I am an activist, trying to provoke change and do things that will help people,” said Wallace, who is also the founder of the Instagram/Facebook group Arkansas Mobile Phoneographers (ArkMoPhs).

Wallace said he didn’t plan to enter until Byram contacted him.

“He asked me what I would enter if I were to participate. I said I would take a photo of Phil Fletcher in a Conway alley, with one side showing blue and the other side, red. I told him I would think about it. I contacted Phil, and he was agreeable, so this is what I came up with,” Wallace said.

Wallace took the photo with his Smartphone, edited on the computer and Byram printed it.

“I’ve known Phil for about eight years. He’s the founder of City of Hope, which serves the under-resourced areas of Conway,” Wallace said. “Phil has given me the opportunity to teach Smartphone photography — photography, really — to children in these neighborhoods. AT&T provides the phones. We teach photo skills, and there is a spiritual lesson involved as well. We are trying to be a positive influence there.

“Phil is an outspoken advocate in this city, while at the same time actively providing real solutions to some of the problems. One year after any administration, you will find him doing what he always does: meeting the needs of hurting people.”

Wallace said the line on the portrait is from a recent post by Fletcher, which reads, in part, “I stand on a mountain lamenting donkeys and

elephants intent on consuming the land.”

He writes in his artist’s statement: “We have elected a man president who has been recorded bragging about his sexual aggressiveness. We have a movement that not only seeks to raise the awareness of sexual assault and harassment but to hold those responsible accountable. Who are we? Because that is what is at stake.”

Byram, who grew up in Conway and recently returned after several years of living elsewhere, said he chose “an almost cartoonist approach to this photographic image to conjure up the spirits of the old black-and-white political cartoons I grew up with in the Arkansas Gazette and Arkansas Democrat.”

Stone titled her oil painting on linen No Room in America.

“There is festering intolerance in this land that has been fanned by the Trump administration and casts a long shadow over those who are considered as others,” Stone writes in her artist’s statement. “For me, an Arkansan with Puerto Rican

roots and the mother of a transgender deaf child, I bear witness to the harm caused by this tribal thinking.”

Stone said she has shown this painting in previous exhibitions, but she added the barbed wire and American flag especially for the One Year Down exhibit.

“A window is a great metaphor for boundaries,” she said. “This window didn’t contain glass or blinds or shutters before the introduction of the barbed wire; it was completely open to let in the light. The wire, however, acts as a barrier to that light, still filtering the light, but also illuminating an iconic image of the Christ child. With the barrier, those outside and inside spaces become the dominant theme, and the barbed wire creates a liminal space that runs between. The low orientation of the infant puts us on the same plane.

“For Puerto Ricans, this dichotomy of us and them has been particularly poignant in the aftermath of one of the worst natural disasters they have faced,” Stone said. “Hurricane Maria raked across the island, totally eradicating the infrastructure and trapping residents with impassible roads, unsanitary water and no electrical power. President Trump succeeded in dehumanizing the people and even lambasted their reluctance to help themselves.

“The truth of the matter, of course, is that since 1898, the United States has controlled the colony, so Puerto Ricans lack the autonomy necessary to help themselves. Literally, Puerto Rico has no power. To elaborate, I have been keeping up with five of my mother’s first cousins on the island. None of them lives in rural areas. They are between the ages of 73 and 86. The first one to receive electrical power was Marta, who lives in a San Juan suburb — the week before Christmas. Hurricane

Maria hit the island on Sept. 20. From where I stand, they are not the ones struggling in the dark.”

Stone will also read poetry at the event.

Trusty said the One Year Down exhibition “seeks to follow in the history of art activism, not through propaganda or inflammatory cheap shots, but through a mature visual dialogue and critique of the current political state.The call for entries was open to artists on both sides of the political aisle.”

“In a ‘red state’ like Arkansas, it was important to give a platform to all voices in order to acknowledge a diversity of thought in our state that may not show up in overarching statistics. It was also important to approach this show in a bipartisan manner so that people from all positions were able to participate,” Trusty said.

“The works included in the exhibition discuss immigration, war and the volatility of our current foreign relations, climate concerns, race in America, the status of women and the #metoo movement, the death penalty and other pressing issues,” she said. “In this time of exceptional partisanship, the hope for this exhibition is that it will not cause further tribalism, but through its inclusion of diverse viewpoints and issues, that the exhibition will encourage discussion and reflection.”