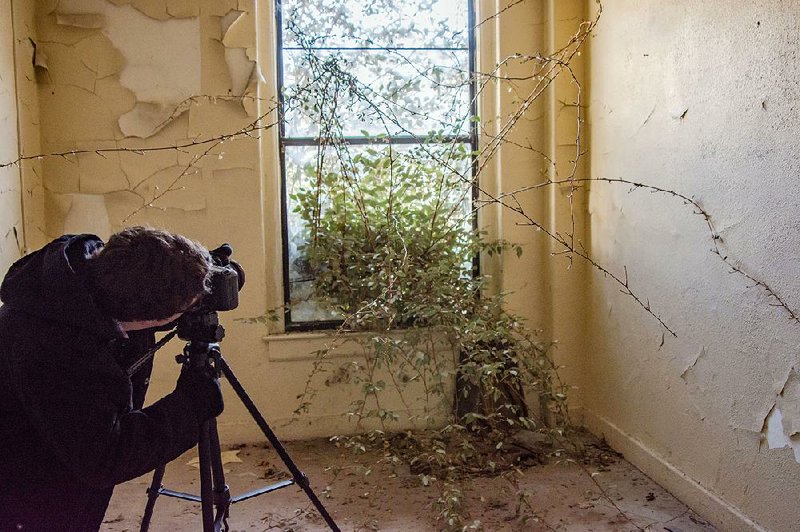 Michael Schwarz gets a shot of a tree that is making its way indoors through a broken window. Schwarz started Abandoned Arkansas in 2012.

ALEXANDER -- There are those among us who just can't pass up the chance to peek inside an empty building, to enter an uninhabited place, sift through what was left behind and discern the stories that linger.

There are four of them here, gathered on this chilly day in late December outside what was once called the Alexander Human Development Center. They are members of Abandoned Arkansas, a group of urban explorers who spend their spare time investigating and photographing abandoned buildings scattered across the Natural State. They chronicle their finds at abandondedar.com, a fascinating, rabbit hole of a resource with dozens of well-curated galleries of eerie, empty structures that often include in-depth histories of the locations.

Visitors to the site can see the gutted insides of the Conway Roller Rink, complete with lonely old skates, unused tickets, fliers for a Back to School All Night Skate! and assorted detritus. There are also pictures of the old Paragould Power plant, its arched windows shattered and its interior decaying, and pre-restoration images from the old Arkansas Democrat Building in downtown Little Rock, which is now home to lofts and a restaurant.

In 2014, the group also documented a school in Winslow that has since been partially renovated.

"I think what they are doing is good work," says Rachel Patton, executive director of Preserve Arkansas, the North Little Rock-based nonprofit that focuses on protecting the state's architectural and cultural resources. "Anything we can do to raise awareness of these historic buildings that are in need of preservation is good."

It's not unusual, Patton says, for Abandoned Arkansas explorers to reach out to Preserve Arkansas for advice or information concerning a property.

"Almost everything that they put up [online], they try to get at least a little bit of history on the property to include on the website to put it into context and explain why that property is important."

Abandoned Arkansas was actually started by an Oklahoman.

Michael Schwarz of Oklahoma City was a 19-year-old student at the University of Central Arkansas in Conway who, bored one weekend in 2012, went exploring in empty buildings and posted what he found to Facebook. He was part of Abandoned Oklahoma and decided to start something similar here.

"I've always loved abandoned buildings," says Schwarz, now 24 and living in Anaheim, Calif., where he works as a videographer and video editor at MotionLit, a company that specializes in documentary video production for the legal industry.

Joining Schwarz for this outing in Alexander are James Kirkendall of Fort Smith, Ginger Beck of Little Rock and Eddy Sisson of Vilonia, each bringing particular obsessions and expertise to the Abandoned Arkansas fold.

Kirkendall, 30, his blond hair hanging from beneath a cap, began as a ghost hunter, but the buildings in which he was searching for shadowy haints began to capture his attention even more.

And he has a soft spot for abandoned hospitals.

"One of my favorites is the Verser Clinic in Harrisburg," he says. "It was a location I came to on accident. I was actually going to another location and found it on the way. It's chocked full of history."

Kirkendall, who works at Wight Office Machines in Fort Smith, is also often the de facto permission-getter for the Abandoned bunch, who stress that they always secure an OK from landowners or other relevant sources before traipsing across a property, cameras in hand.

"It's just talking to the right people," he says. "Sometimes you talk to the owner and get right in, but for some places you have to talk to the city, the Chamber of Commerce or a real estate agent."

It took him more than a year, he says, to gain access to the Logan County Memorial Hospital in Guthrie, Okla., featured hauntingly on the Outside Arkansas section of abandonedar.com.

Sisson, 41, is a master control engineer at KARK in Little Rock and the group's expert on Arkansas' most famous abandoned theme park, Dogpatch USA near Harrison, which closed in 1993 and was recently bought by Heritage USA.

"I saw photos of the water slide and just fell in love with it and had to go up there and start trying to preserve it" in images, Sisson says. His Facebook page dedicated to Dogpatch has more than 37,000 followers.

Beck, 38, is a teacher at W.D. Hamilton Learning Academy in Little Rock and a pink-haired tattoo artist who has been a part of Abandoned Arkansas since October. She is the group's social media manager.

"I posted on Facebook that I wanted to explore some buildings," she says. A friend of a friend told her about Schwarz and put them in touch. "It was on from there."

She's a fan of abandoned swimming pools and staircases. One of her favorite sites is an old house in southeastern Arkansas near the Louisiana line. "It's in the middle of nowhere. It's got an indoor pool and is huge and dilapidated."

Schwarz is fond of the Majestic Hotel in Hot Springs, which was demolished in 2016 and about which he's making a documentary.

The four are eager to enter the sprawling, four-story former human development center to have a lookey-loo at what's inside.

It's a return trip for Schwarz and Beck.

Schwarz found out about the site in 2012 from a college friend who grew up nearby.

Opened in 1936 as the Thomas C. McRae Memorial Sanatorium, the site was the first in Arkansas to treat black patients with tuberculosis. In 1968, after the integration of the state's sanatoriums, it became the human development center, providing long-term care to the mentally ill and those with intellectual disabilities. It has been vacant since 2011 and today looks like a perfect spot to make a horror film.

Entering through an opening at a loading dock on the backside of the building, the crew is met with the first of many scrawlings of profane graffiti, which elicits more than a few chuckles.

Beck's first trip to the center was a solo visit that she streamed live on Facebook.

"People ask if I ever get any weird vibes," says Beck, who is carrying a knife in one of her boots and wears a ventilated mask to ward off mold. "But the only thing I feel when I'm walking through here is 15- and 16-year-olds having a good time. Because of all the graffiti, I don't feel creeped out. It makes me laugh."

THE STUFF LEFT BEHIND

It's surprising how much deterioration has occurred in just six years of vacancy. Tiles from drop ceilings have fallen to the floor, most windows are shattered, paint peels from the walls in the curled shape of tortilla chips. In the original entryway, the remnants of a chandelier hang like a rusty vine. Many of the small rooms are empty and bare, and what furniture remains is mostly broken and dirty. Board games rot in a bright sunroom. Long, empty hallways are lighted by the afternoon sun streaming through broken windows in rooms where patients once lived.

Beck points out the handwritten labels in the tiny closets of the center's rooms that say "socks," "shirts" and "underwear." On the floor of one room she finds scattered papers with descriptions of patients' information and needs, one of which says, "My inappropriate behavior has improved, to a point ..."

Schwarz makes his way around the scattered debris with a camera on a tripod. Strangely, the photographic possibilities of dilapidation aren't really what motivate him.

"I like taking pictures, but I like just being there more," Schwarz says as he makes his way down a hall. "I really like finding the little stuff that was left behind. Even if you're in a small community church, finding the paper on the ground from the last day it was open. And I love finding handwritten stuff, like when people write little notes and leave them on their desks."

In these unpeopled places, architectural and cultural history can be divined, though sometimes questionable remodeling jobs have hidden the really cool things.

"My favorite example is the Majestic," Schwarz says. "It went through renovations in the '60s that covered up one of the columns in the veranda room with mirrors. The mirrors got broken and you could see the original 1926 column. You see the layers. It's quite appealing."

"A peeling," Beck says, noting the peeling paint around them. They both laugh.

There are buildings like the Alexander center that are slowly falling apart, and then there are the places that just look, well, abandoned.

"The Cherokee Village Hospital," Sisson says when asked about a memorable exploration. "Everything was in there. The MRI machine, a bunch of '90s equipment. Post-it notes were still on the computers. They just shut it down."

The extensive gallery of photos by Sisson, Schwarz and Kirkendall look like a set from The Walking Dead, minus the zombies, of course.

These explorations are more than tongue-clucking excursions into sad ruins, Schwarz says.

"It's not about saying, 'Look at this really ratchet, terrible building.' It's about preserving what it once was, or what it is, because no building will live forever. People have a history here and that's our mission, to preserve that history. That's what got me into it."

"We're about more than just taking pictures. We're trying to benefit these places. When people hear the word 'abandoned,' they think we're just there to do whatever, but we want to assess the situation and see what we can do to help whoever owns it." 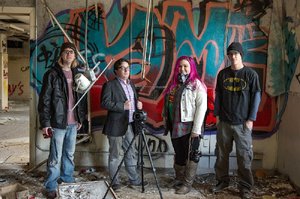 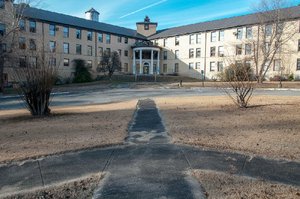 Photo by Cary Jenkins
The Alexander Human Development Center has been abandoned since 2011. 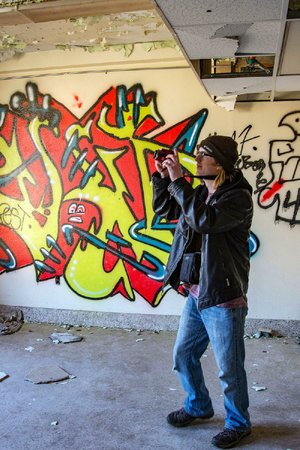 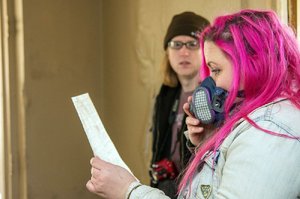 Photo by Cary Jenkins
Ginger Beck reads from notes about a former patient at the old Alexander Human Development Center.