Arkansans tell Trump: Do no harm to trading 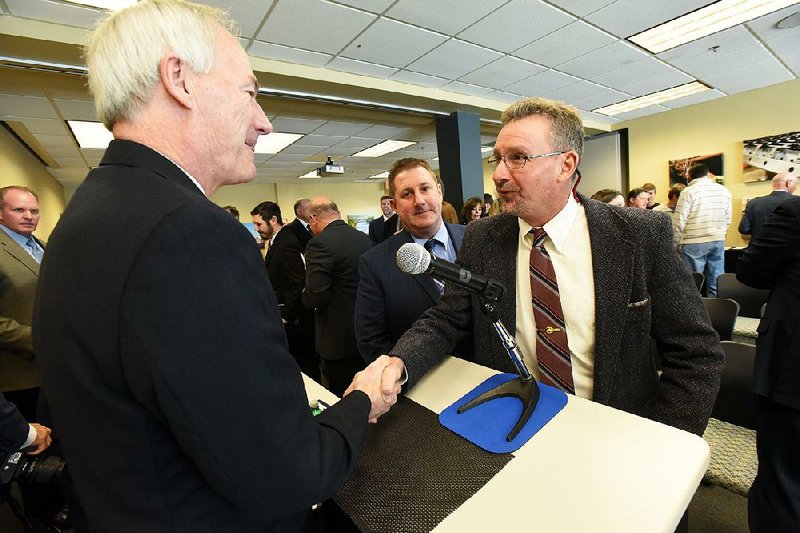 Turkey farmer Jeff Lindsey (right) greets Gov. Asa Hutchinson during a conference on the North American Free Trade Agreement in Rogers. Lindsey said the uncertainty in U.S. trade negotiations with Mexico and Canada makes him worry about his family’s future.

ROGERS -- Gov. Asa Hutchinson and Arkansas business leaders on Tuesday sent a unified message to the Trump administration about pending trade negotiations: Change is fine, but do no harm to the state's trading relationships with Mexico and Canada.

"We need to have an outcome that is consistent with North American trade that is free of unfair trade barriers," Hutchinson said. "It's so important for our rice, our poultry, for our soybeans, for all our commodities in Arkansas."

Hutchinson spoke about the state's relationships with Canada and Mexico at a conference at the Arkansas World Trade Center in Rogers. A sixth round of negotiations over the North American Free Trade Agreement is scheduled next week.

The NAFTA trading bloc between the United States, Canada and Mexico was established in 1994. Arkansas exports have increased with both countries more than 400 percent since the agreement took effect, according to the Arkansas branch of the World Trade Center. Canada and Mexico are the state's top agriculture markets, receiving 44 percent of state-grown agricultural products.

The potential that a renegotiated trade agreement could be negative for the state is a concern, Hutchinson said. "But you also have to have the confidence that our negotiators are making sure they're in a good position to negotiate a successful agreement for us. It does need to be modernized."

In a recent meeting with President Donald Trump, Hutchinson shared his concern that Canada and Mexico could retaliate, and what that would mean for U.S. agriculture.

Hutchinson said during the meeting that if trade barriers are increased, another country could very easily say they're going to retaliate in terms of trade. "And the first victim of trade is agriculture. Now, of course what he said next was 'Don't worry about this Asa, I got this under control.'... I left there and I'm still worried about it."

Trump said in a recent interview with the Wall Street Journal, that his position on the trade agreement hasn't changed; that he would terminate NAFTA if necessary. Hutchinson is hopeful that Trump is "positioning himself and his administration" to bargain from a place of strength for an updated agreement that benefits both Arkansas and the United States.

"We need to reduce all tariffs in Canada to have free trade with both partners," Veach said. "We need to have all of industry and retail and agriculture working hard to make this agreement stick and stay."

Veach reiterated how reliant Arkansas is on NAFTA for agriculture. Arkansas-grown commodities, including 52 percent of soybeans, 36 percent of poultry, and 20 percent aquaculture (catfish), are shipped to either Canada or Mexico, according to the Arkansas Farm Bureau.

Almost "40 percent of the commodity dollars that come into our state is from exports. So if you take that away ... do you see what the effect would be in our state?" Veach said. "All segments of agriculture are in this."

Northwest Arkansas-based companies Tyson Foods and Wal-Mart both support beneficial changes to the trade agreement -- but not a termination of the deal.

Arian Both, vice president of global sourcing for Wal-Mart, said a termination would force Wal-Mart to restructure supply chains that the company has built over years.

"Of course, that will mean increasing costs for our customers and decrease business opportunity for U.S. businesses ... [but] there's much to be gained from a successful renegotiation of NAFTA," Both said.

Doug Ramsey, poultry president for Tyson Foods, said the agreement has benefited the company greatly for its partnership with Mexico, which has been the U.S. poultry industry's top export market for years.

"NAFTA is critical to the U.S. protein industry and withdrawal would be a huge blow to our competitive position," Ramsey said. "While NAFTA certainly can be improved, its benefits to Tyson Foods, the state of Arkansas and the protein industry are absolutely not in question."

However, Jeff Lindsey, a turkey farmer for Cargill, said what keeps him up at night is the uncertainty of the negotiations. When he's not tending to poultry, Lindsey takes care of his 3-year-old granddaughter and worries about his family's future.

"I've recently learned that 633,000 jobs could be affected by this. Well I'm one of them folks. ... When we start talking about pulling out of trade agreements and things that affect industry -- that's what keeps me up."

Print Headline: Arkansans tell Trump: Do no harm to trading