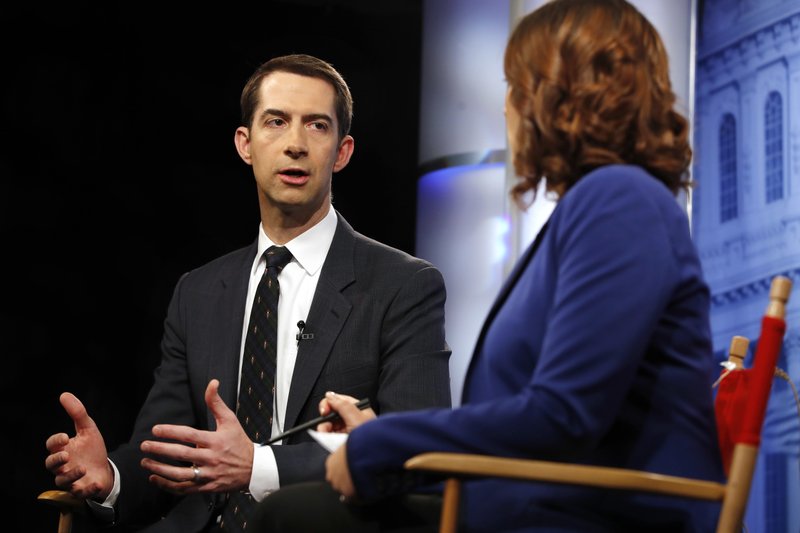 Stacey Lane of Fayetteville said she received the ultimatum after dropping an f-bomb or two during phone conversations with Cotton's staff members.

Shortly thereafter, she was ordered to back off.

"This letter is immediate notification that all communication must cease and desist immediately with all offices of US Senator Tom Cotton," the Oct. 17 warning states. "All other contact will be deemed harassment and will be reported to the United States Capitol Police."

The unsigned message, printed on official U.S. Senate stationery, was attributed simply to "The Office of U.S. Senator Tom Cotton."

The letter drew little attention until this week, when it popped up on social media. On Thursday, it circulated on Facebook and Twitter.

Lane says that, like the president, she sometimes uses strong language.

"Have I used expletives? Yes," Lane said. "I like to think I use them appropriately and to get people's attention."

She has used salty speech with staff members for U.S. Sen. John Boozman and U.S. Rep. Steve Womack, but they've never threatened to call the police, she said.

Boozman spokesman Patrick Creamer said the state's senior senator hasn't sent cease-and-desist letters to foul-mouthed callers "nor is it something that he would really contemplate."

Lane says she said she's concerned about the direction of the country, about Republican efforts to repeal the Patient Protection and Affordable Care Act and about the leadership of President Donald Trump.

"I'm just speaking up for my country and I'm trying to sound the alarm as loud as I can," she said.

A prohibition on calling, writing, texting or emailing her elected official is unwarranted, she said.

Such warnings are seldom necessary, according to Cotton spokesman Caroline Tabler.

"These letters are rare and only used under extreme circumstances," she said in a written statement.

The warning used language that had been recommended by the Capitol Police.

The office did not say how many other Arkansans have received similar letters.

"Senator Cotton is always happy to hear from Arkansans and encourages everyone to contact his offices to express their thoughts, concerns, and opinions," Tabler wrote. "In order to maintain a safe work environment, if an employee of Senator Cotton receives repeated communications that are harassing or vulgar, or any communication that contains a threat, our policy is to notify the U.S. Capitol Police's Threat Assessment Section and, in accordance with their guidance, send a cease and desist letter to the individual making the harassing or threatening communication."

Cotton's office is not accusing Lane of saying anything threatening, Tabler subsequently said. She declined to provide additional details about Lane's comments.

Lane isn't the only Arkansan to be threatened with police intervention this year after calling Cotton's office.

Don Ernst of Little Rock said he had been trying for months to get more information about Cotton's views on two issues: the Individuals with Disabilities Education Act and the opioid crisis.

The former aide to Bill Clinton when he was governor had sought answers, unsuccessfully, 17 times over a four- or five-month period, he said. When he contacted the office for the 18th time, he complained about the situation, calling the lack of a response "bulls***," he said.

Shortly after he uttered the word, the phone went dead. The staff member, he said, had hung up.

Subsequently, Ernst was told that a cease-and-desist letter had been sent. It never arrived, he added.

Ernst cares deeply about government support for opioid treatment programs because his son has battled addiction, he said.

Ernst has apologized for using the barnyard term, but remains baffled that Cotton's staff would threaten to involve law enforcement officers.

"I hope you can tell that I'm a kind and decent, loving guy most of the time. I'm empathetic with people who serve in these roles," he said.

Cotton isn't the only lawmaker sending out cease-and-desist letters.

Last year, U.S. Sen. Ron Johnson, R-Wis., sent such a letter to one of the people he represents. The constituent admitted calling the lawmaker's office dozens of times a day.

The letter ordered Robert and Lillian and their 13-year-old son, Joshua, to cease and desist from "all verbal communication, emails, text messages, and office visits."

Anything other than letters to LaMalfa's Capitol Hill office would be "deemed harassment and will be reported to the United States Capitol Police."

In a written statement, published in the Redding Record Searchlight, a LaMalfa spokesman said the letter was sent due to "the extreme volume" of the communications as well as the family's tone and "physical actions."

Joshua, who is now 14, is the one who contacted the lawmaker's office most frequently. Asked how many times, he said, "to be honest, too many to count."

The First Amendment gives him that right, Robert Brown said.

In addition to protecting freedom of the press, speech and religion, it also protects "the right of the people peaceably to assemble, and to petition the government for a redress of grievances," he noted.

"It just doesn't make any sense to me that a congressional staff or a representative would tell one of his constituents to basically sit down and shut up," he added.