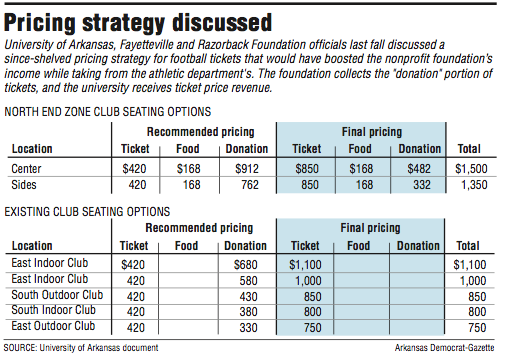 The University of Arkansas, Fayetteville and its nonprofit athletics fundraising arm discussed a now-shelved pricing strategy for football club seating that would have redirected at least $4 million annually in university ticket revenue to the nonprofit.

Officials confirmed the talks after the Arkansas Democrat-Gazette recently obtained a document detailing the idea through the state's open-records law. The disclosure comes as the newspaper examines the relationship between the UA campus and the Razorback Foundation, which has maintained that it is an independent private agency that receives no public money and is not subject to open-records requests.

The idea behind the pricing strategy was to keep the total per-seat cost unchanged for fans while raising the "donation" share of that cost, which meant lowering the face value of tickets, the document shows. The foundation collects "donations," and the university receives ticket price revenue, which it has pledged to put toward paying down $120 million in debt to renovate and expand the stadium, including new north end zone seating.

Chris Freet, the university's associate athletic director for strategic communications and external operations, circulated the club-seat pricing document last fall. He said it was "one piece of six-plus months of conversations about pricing options" and that the goal was to provide the "greatest benefits to potential donors."

"As an example, if a donor paid for a club seat in 2017, and we found a way for a greater portion of that total cost to be tax deductible in 2018, we explored it in depth," Freet said by email. "Unfortunately, the new tax law no longer provides that opportunity. We've looked at many options and because of that, it's impossible for me to answer your questions related to this specific time and specific document without hypothesizing."

Officials abandoned the plan last September. Congress approved changes to the U.S. tax code in December, including one that disallowed tax deductions for donations specifically made to secure seats at athletic venues.

Provided a copy of the document by email, Razorback Foundation Executive Director Scott Varady said he was "not familiar" with it.

"The Athletic Department sets ticket prices," Varady said. "If asked, the Razorback Foundation may share input from Razorback Foundation members and donors with whom we interact as part of our day-to-day activities. Additionally, we can make other suggestions or provide feedback to the Athletic Department for its consideration, including, for example, tax deduction issues."

Varady and university officials have declined interview requests and instead have sent responses to questions by email.

The Razorback athletic department is self-sustaining, which means it does not collect a dedicated student fee or accept other money transfers from elsewhere within the university. University spokesman Mark Rushing has said in the past that athletic department money, such as ticket proceeds, is not considered "public funds."

The foundation pays the department a minimum $12 million per year through its contract to assign seating in sports venues, including roughly 48,000 of the 72,000-seat Razorback Stadium. It also raises money for athletic department projects, such as the stadium expansion.

In fiscal 2016, the nonprofit gave $21.2 million in support to the university, according to its latest tax filing.

The foundation signs contracts with some coaches that set compensation for speaking engagements and what the nonprofit will pay them if the university fires them. It also signs contracts and pays third parties on behalf of the university, such as when it hired a search firm last year to help find a replacement for fired football coach Bret Bielema.

Varady has refused Arkansas Freedom of Information Act requests for those documents, saying the state's open-records law does not apply because the foundation receives no public money and maintains independent interests.

The Arkansas Democrat-Gazette has since requested through the open-records law that the UA provide all emails exchanged between three dozen specific athletic department employees and the foundation last year. To date, the university has provided 4,700 pages of emails from 23 employees' accounts.

The newspaper accessed the two-page "Club Seat Pricing & Donation Changes" document from an online file storage service by entering a Web address that was included in one of the released emails. The record was not password-protected or otherwise shielded from people who had the Web address.

The document was created to "serve as an agenda for (former athletic director) Jeff Long when we meet next week," Freet wrote in a Sept. 14, 2017, email. He sent the email to the foundation's chief financial officer and its senior associate director, as well as to the UA's assistant athletic directors over ticket operations and ticket sales.

"The meeting was to explore the best possible tax structure for Razorback fans and donors," Freet said. "That effort, however, is moot because the new tax law eliminated the tax deduction for donations made for the right to purchase athletic tickets."

The agenda listed the email's recipients -- as well as a university lawyer, the athletic department's chief financial officer and Varady -- under a heading that said "staff."

Long has declined interview requests through his attorney. After the school fired him in November, he signed a $4.6 million severance agreement that limits what he can say publicly.

Freet created the record Sept. 14 and last edited it Sept. 21, according to the file storage service, Google Docs. The service allows viewers to track changes, which show that the initial proposal was to slash per-seat ticket prices -- by half or more in most cases -- and to offset higher donations.

Before the expansion, Razorback Stadium's 9,038 club seats made up about 12.5 percent of the stadium's capacity. No other Southeastern Conference school had more club seats in 2013, according to a market analysis conducted then by a firm hired to study the potential expansion.

Proposed "recommended pricing" would have equated to a reduction of at least $4.4 million per year in athletic department revenue, or more than 10 percent of the $40.8 million the department collected from ticket sales in fiscal 2017, according to Arkansas Department of Higher Education data.

That estimate is based on the difference in proposed ticket prices multiplied by the number of club seats. It reflects specific price proposals that varied by section. For example, the proposed north end zone ticket face value was $430 less than the finalized version. Over 2,221 seats in that section, that comes out to roughly $955,000.