How to get food when you’re stranded and hungry 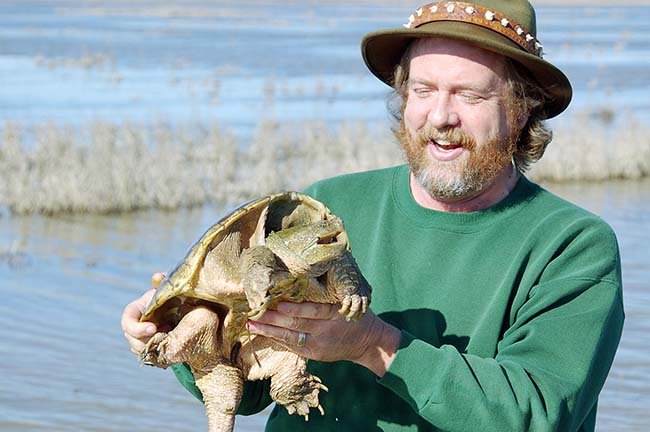 Survivalists should avoid the sharp jaws and claws of turtles like this common snapper, caught by Keith Sutton of Alexander, but a big turtle like this can provide food for several meals.

All of us hope we’ll never find ourselves in a survival situation, but it happens more often than you might think. Our vehicle breaks down in the backcountry far from the nearest help. A sudden storm hits, and our boat capsizes, casting us ashore on some remote piece of real estate. We get hopelessly lost while hunting or fishing in isolated territory few people ever visit.

If something like this happens to you, you’ll need to deal immediately with serious concerns such as treating injuries, creating shelter, attracting rescuers’ attention and obtaining water. Obtaining food, if you do not have any, is much further down the priority list. You probably can live for days, perhaps weeks, with little sustenance.

If your unfortunate situation continues for days instead of just hours, however, food becomes increasingly important. Having something to eat helps the survivor maintain a positive attitude and a healthy condition. Without it, your struggles will be much more difficult.

In many situations, wild plants are the most readily available food source, but in the limited space here, we’ll focus on obtaining edible wild animals, including fish, birds, reptiles, amphibians, mammals and various invertebrates. Most are not only edible, but delectable.

If stranded near a body of water, catching fish may be the best way to satisfy your hunger. The problem, of course, is how to catch those fish. Try these techniques.

Hooks can be whittled in the traditional shape from wood, shells or bone. A simpler type is a gorge, a short (1 inch or less), straight piece of hard material sharpened at both ends and notched in the middle. Line ties to the notch, then the gorge is covered with bait. Allow a fish to swallow the gorge with the bait, then jerk so the gorge lodges in the fish’s throat.

Serviceable fishing line can be made from threads in clothing and equipment, pieces of wire, dental floss, sinew from a deer leg or twisted bark. Good survival books offer tips on improvising with such materials.

Make lures from hooks and pieces of cloth, feathers or metal fashioned to imitate natural food, such as minnows. Many fish will strike nothing more than a strip of colored cloth attached to a hook.

There is practically no end to the makeshift spears you can create. A sharp piece of bone, wood or metal can be lashed on as a tip, or you can simply whittle the end to a sharp, barbed point. The latter type is effective when wading at night with a torch.

Small fish can be collected by immersing crushed walnut hulls or red buckeye nuts in a small area of quiet water. These release chemicals that make it impossible for fish to breathe. The fish die and are easily gathered. Crushed mullein plants work in a similar fashion, as does lime made from heated and crushed mussel shells.

Dinner on the Half Shell

Mollusks such as clams, oysters and mussels make great survival vittles because they are often abundant and can’t run, fly or swim from the eater. Look for freshwater mussels in shallows of sand- or gravel-bottomed streams and lakes. Gather clams, oysters and other sea creatures during low tide. Eat only fresh, live ones that keep their shells tightly closed. They’ll open when cooked. Don’t overlook delicious crustaceans, either, including crabs and crayfish. A scrap of meat tied on the end of a line will often coax one to grab on long enough for you to lift it from the water.

Although eating insects may seem repugnant, these invertebrates are plentiful, except during winter; are highly nutritious in terms of calories, protein and vitamins; and can be important emergency foods. Any insect big enough to be worth the trouble is eaten by people somewhere. Cook all insects before eating, however, as some have harmful parasites. And if you have shellfish allergies, don’t eat insects.

Among the best are the following:

Cicadas: Pluck the wings, and drop the cicadas into a wilderness stew.

Termites: These insects are said to taste like pineapple. Just 3-1/2 ounces have 347 calories. A like amount of lean beef has 301 calories.

Grasshoppers/crickets: These are eaten by many people worldwide. Trying roasting them like the North American Indians did.

Ants: These insects are common foods in parts of Brazil, Thailand and Africa, but beware of stinging types such as fire ants.

Aquatic insects: These can be eaten in both adult and larval forms and often taste better than their landlubbing brethren.

Birds are often easily caught for food. Some can be killed at night on roosts. Some, like ptarmigan and spruce grouse, act tame and may be killed with rocks or sticks. Molting ducks and geese can often be clubbed or netted. All parts are edible, including the heart, liver and gizzard. Save the feathers for uses such as insulating clothing and making arrow fletching. Save the bones, too. They’re good for fish-hook making.

During warmer months, look for bird eggs. They’re a highly nutritious food. Turtle eggs and fish roe are also good, but avoid eggs of rough fish, such as gar and bowfin, that contain poisonous icthyootoxins.

Dinner and a Bowl

Slow, easily captured turtles are a great source of wilderness nutrition and come with built-in dinner bowls. Avoid jaws and claws, remove the head, and allow the turtle to bleed out. Then throw the whole turtle on hot coals, let it cook, and pick out the meat. Avoid box turtles, however, which often eat dangerous fungi that render their flesh poisonous.

Lizards, snakes and alligators are tasty, too. You’ll be wise to avoid those that can kill you with venom or teeth, but some are big and tasty enough to make it worth the effort to safely dispatch and eat them.

If you have a gun and game is plentiful, obtaining hoofed mammals such as deer and elk, or small game such as rabbits and squirrels, may be relatively simple. Night hunting with a light or torch often improves success.

You can also use snares and traps if you learn to make and use them as part of your survival education. In many situations, however, these are minimally effective, and materials to make them may not always be available.

The porcupine and nine-banded armadillo, which together range throughout much of North America, can be easily approached and killed with a club. Both provide nutritious survival food. Place the porcupine on its back to skin it, using care to remove the hide after making a throat-to-tail incision along the quill-free belly. The meat of an armadillo can likewise be removed, and you can save the bony shell for a bowl or cooking pot.

The best mammals for survival food may be small rodents such as mice, rats, lemmings and voles. In some areas, they’re so plentiful you could find and kill dozens before you see a bigger animal. And while the idea of eating a rodent may not be appealing, a mouse or rat kebab may be just what you need to keep you going when the going gets tough.