He’s briefly held over charge in shooting of shoplifting suspect by Ryan Tarinelli | January 24, 2018 at 4:30 a.m. 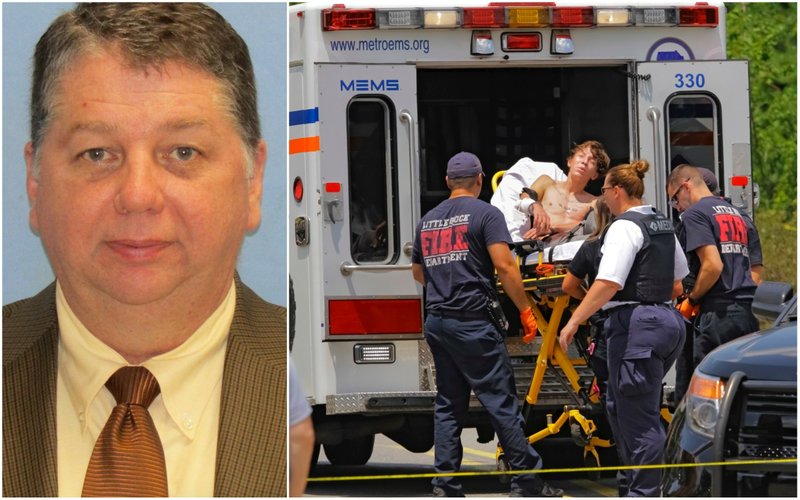 At left, Ralph Breshears is shown in a mug shot taken at the Pulaski County jail. The photo at right shows shoplifting and robbery suspect Rudy Avila being taken into an ambulance after being shot in west Little Rock on July 19.

A former Little Rock police officer was arrested Tuesday on a misdemeanor battery charge that stemmed from his role in an officer-involved shooting last summer.

Breshears was arrested on one count of third-degree battery, and Burk said the former officer spent about an hour in the county jail.

Breshears shot and wounded Rudy Avila, 23, outside a Chick-fil-A in west Little Rock on July 19. Police say Avila was a shoplifting suspect who fled police custody, then forced a woman from her vehicle and tried to drive away.

Court documents obtained Tuesday say Breshears fired his service weapon and hit Avila, "placing the female victim in harm's way." Breshears, during the investigation, gave a taped statement that "appear to be inconsistent with what can be seen on surveillance video," according to the affidavit.

According to published reports, Breshears, who joined the Police Department in 1991, was fired from the department in 2003. The termination came after police officials decided he unlawfully arrested a woman, included false information in an incident report and was insubordinate in initially refusing to ask that charges against her be dropped.

Breshears had ticketed the woman on counts of disorderly conduct and attempting to influence a public servant. The city's Civil Service Commission upheld the firing on a 4-1 vote. Breshears, in October 2003, filed notice that he would appeal the commission's decision to Pulaski County Circuit Court.

Lt. Michael Ford, a Little Rock police spokesman, said Breshears went through the appeals process and eventually got his job back.

The lead-up to the July police shooting began when officers responded to the Home Depot at 12610 Chenal Parkway for a report of a shoplifter in custody, according to the department.

Police said that while en route, officers were told the suspect was becoming uncooperative and aggressive.

According to the affidavit obtained Tuesday, Breshears arrived with another officer and took Avila, the shoplifting suspect, into custody.

As police were escorting him from the store, Avila pulled away and ran toward a Chick-fil-A restaurant east of the Home Depot, according to the court documents.

The document says Breshears got in his patrol car to cut off Avila as the other officer chased the man on foot. Breshears then spotted Avila in the drive-thru of the Chick-fil-A as he forced a woman from her vehicle, the affidavit says.

Breshears is seen on video parking the patrol car and approaching from the south, according to the document.

"Breshears can be seen with a single arm outstretched holding what appears to be his service weapon," according to the affidavit.

At that point, the woman is out of her vehicle and Breshears is seen on video standing out of the path of the vehicle, the affidavit says.

"As the vehicle begins to move exiting the drive thru Breshears fired his service weapon striking Mr. Avila and placing the female victim in harm's way," the affidavit says.

"At no point was Breshears in any danger of being run over by the vehicle."

In a statement released after the shooting, the Little Rock department said police gave Avila several commands to stop and exit the vehicle, but he ignored those and "attempted to drive around a vehicle in front of him and drove toward Officer Breshears."

Breshears, in fear for his life, fired his weapon at Avila, the statement said.

"We treat those cases just like any other criminal case," he said, referring to cases filed related to police shootings. Johnson did not discuss the specifics on how the office arrived at the decision to file the misdemeanor charge.

All investigative case files related to homicides or police shootings are seen by at least five attorneys in the office, he said.

Ford said Breshears is the first Little Rock officer to be arrested over on-duty actions since former officer Josh Hastings, who was charged with manslaughter in 2012.

The former officer, who was fired from the department, has since been found liable for the teenager's death in a civil lawsuit.

Ford said an internal investigation into the July shooting is still open.

The shooting of Avila was at least the third in Breshears' career.

In 1997, Breshears fatally shot an armed man while executing a search warrant at a Little Rock residence. Another officer, Todd Hurd, killed a second man during the incident.

Prosecutors cleared both officers of wrongdoing in the killings.

In 1995, Breshears fired shots when gunfire broke out during a drug raid. Officer Joseph Tucker Fisher, 34, was fatally shot, and another officer, Frederick Lee, 26, was shot in the head.

Breshears was not injured in the incident and did not shoot anybody.