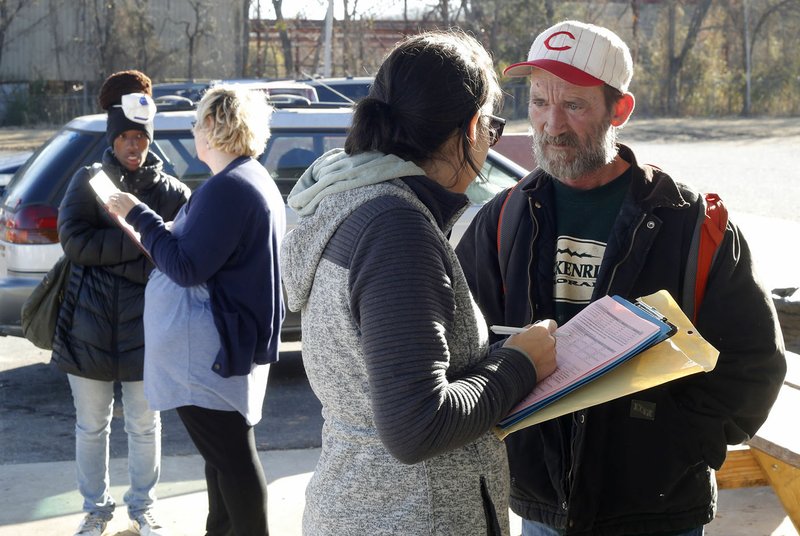 Jessica Andrews (left), CEO of 7 Hills Homeless Center, speaks Thursday with Jimmy Morgan (right), homeless, as she fills out a survey at the 7 Hills Day Center in Fayetteville. The Northwest Arkansas Continuum of Care held a 24-hour survey to gauge the scale of homelessness in the area. It’s the first time the survey has been done yearly instead of biannually.

Northwest Arkansas is taking a census of its homelessness as local nonprofit groups deploy new tools to fix the problem.

Volunteers and staff members of shelters and other homeless assistance organizations under the umbrella of the Northwest Arkansas Continuum of Care fanned out Thursday to dozens of camps and community meals to count, as completely as possible, how many people don’t have stable housing. The 24-hour survey wraps up this morning.

Members of those organizations for years have said the process helps them inform their work, apply for federal and other grants and meet people who could use their services. Surveyors asked people where would they stay overnight, what their needs are, their age and other characteristics.

“This will help our community,” Glenn Miller, local mission coordinator with Fayetteville’s Central United Methodist Church, told about 100 people who turned out for the church’s regular hot lunch. He urged them to take part in the survey.

Findings could be ready within a few weeks, said Nick Ogle, director of a Continuum member group called the Center of Collaborative Care that’s compiling the responses. Survey respondents can sign up for an online system called Hark, which the center developed, that can connect them to the Continuum to help with their specific needs and get them housed quickly.

Continuum members have called the system a turning point in the fight against homelessness.

“We can do that immediately for them,” Ogle said “There is such a good shift going on.”

The region’s last homelessness survey in January 2017 reached about 600 respondents and estimated some 3,000 children and adults altogether in Benton and Washington counties were doubled up with other families, stayed in shelters of some kind or were on the streets on one day. The result was roughly double the number found in the first survey in 2007.

Countless paths can lead to homelessness and make it difficult to escape, according to past surveys and separate interviews with people affected. Many of them point to life-shaking events, such as divorce, job loss or a severe illness or injury, from which they don’t financially recover. Domestic violence, substance abuse and mental illness are also common factors.

On top of them all, housing prices are a growing burden for locals with low incomes, according to Census estimates. A majority of Northwest Arkansas households that make $35,000 or less a year pay more than 30 percent of that income on rent or mortgage.

George Santhuff has been camping in west Fayetteville for more than four years and often goes to 7 Hills Homeless Center for meals, showers and other help. He’s blind in one eye and said jobs in warehouses or as a dishwasher never last because his eye easily gets infected and affects his depth perception. He’s been working with 7 Hills to file for federal disability benefits for months, hoping to save them up month after month to afford an apartment deposit.

“Not yet,” he said of his progress Thursday, his throat sore from a cold.

In the meantime he camps, even on frigid nights, in his tent with hand warmers in his sleeping bag.

This year’s survey is different from the past ones in multiple ways. For one thing, it’s a year early; previous counts were done every other year to meet federal standards. Continuum of Care board members said they bumped it up in order to get a more immediate picture and follow the lead of other continuum groups around the country.

For another, the Continuum led the survey this time around. Kevin Fitzpatrick, a sociology professor at the University of Arkansas, Fayetteville, organized the count from 2007 to 2017 but isn’t involved this year.

Fitzpatrick long criticized the Continuum for not taking a more active role in the survey or the analysis of its findings, and even members described the umbrella group as listless in the recent past. In the past year or two the Continuum has reinvigorated and refocused, bringing in more members and board members and incorporating the Hark system to allow groups to refer clients to each other and start whittling down homelessness.

“Together we can help everyone,” Angela Belford, Continuum board chairwoman, said at a Fayetteville homelessness awareness event in November. She called on the community to devote more “time, talent and treasure” to the cause and build a safety net against homelessness. The Continuum has set a goal for “functional zero” homelessness by 2025, meaning people get helped and rehoused almost as soon as they lose their homes for any reason.

Some volunteers in this year’s count were new to the effort. Bill Levine, an associate professor in the university’s psychology department, said he joined in at the urging of his wife, Cari Bogulski, who works at the Center for Collaborative Care as director of statistics and analytics.

Levine grew up in Chicago and saw people on the streets everywhere, a constant reminder of the problem.

“I always thought of it as a city thing,” he said, and he knows better now. “I’m glad to be able to help.”

The switch to a Continuum-run operation led to changes in the count itself. The final results will still include data from school districts and come from a survey that’s largely the same as past years, but the survey no longer asks if respondents are doubling up with friends or family — if they sleep in a house or an apartment, they won’t be included in the count.

Fitzpatrick’s findings, such as the 3,000 number last year, included hundreds of people in that category, so this year’s survey could come to significantly different results. The U.S. Department of Housing and Urban Development doesn’t consider those people homeless, but Fitzpatrick referred to them as the invisible homeless and argued they’re important to include when measuring housing issues.

Fitzpatrick this week in an email said he wants to see if the new survey comes to “wildly different numbers” than his past work but otherwise declined to comment on his lack of involvement this time around.

Belford said Thursday the new survey focuses on information that can guide the Continuum’s work. The survey also expanded in some ways, she added, such as by including Huntsville School District for the first time as part of a push to bring more Carroll and Madison county organizations into the fold.

Dan Holtmeyer can be reached at dholtmeyer@nwadg.com and on Twitter @NWADanH. 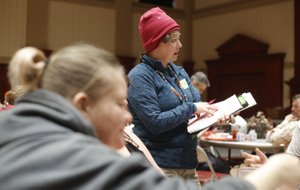 Photo by David Gottschalk
Dannah Vetter, a volunteer, asks questions Thursday as she fills out a survey at the Central United Methodist Church in Fayetteville. The Northwest Arkansas Continuum of Care held a 24-hour survey to gauge the scale of homelessness in the area. 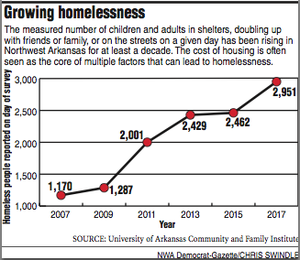