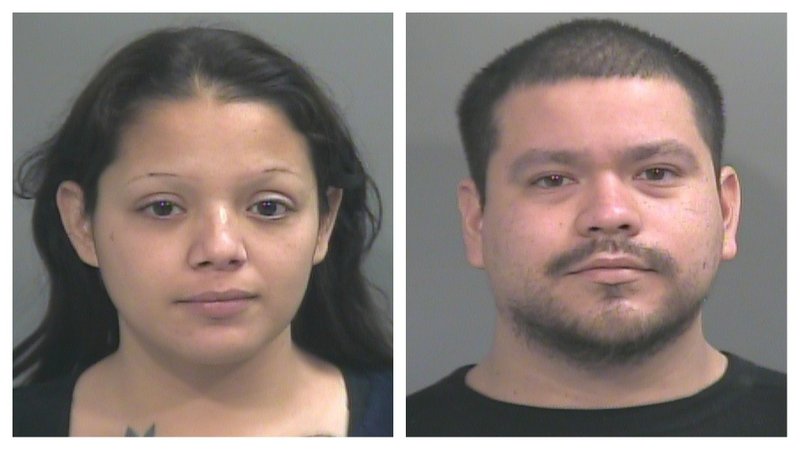 A Northwest Arkansas couple was arrested Saturday after police investigated reports that an 8-year-old boy had been routinely handcuffed, starved and neglected for several weeks, authorities said.

The Arkansas Department of Human Services brought a hotline report to the Fayetteville Police Department on Wednesday stating that the child was being handcuffed to furniture and denied food as punishment, a police report shows.

Detectives noted that the boy had a scabbed injury on his right wrist consistent with being handcuffed and was extremely thin with a distended stomach. He also had a bruised shoulder and injuries on his back along his spine, the report states.

When interviewed by authorities, staff members at the 8-year-old's elementary school said his appearance had changed significantly since November.

"His eyes had become sunken, as had his cheeks, and his skin tone changed," the report states.

School officials also said the boy was often wet with urine or smelled of it, but Miranda and her live-in boyfriend of six years, Josue Tovias, 28, would become defensive when alerted and denied the school's request to bring clean clothes.

Miranda's 17-year-old daughter reportedly provided investigators with an audio recording of Miranda disciplining the 8-year-old early in the year, threatening to cut him. Authorities could hear Tovias' voice as well as "something being repeatedly struck," according to the report.

Authorities took Miranda and Tovias into custody immediately after hearing the recording.

Police said that Miranda told officers she handcuffed the child to a desk in the living room as punishment for stealing junk food from the kitchen during the night. According to the report, she set alarms every hour or so to take him to the bathroom, but the boy often couldn't make it, so she made him sleep on a trash bag. She added that she had held a knife to the 8-year-old's wrist while threatening him in the recording.

The 33-year-old initially denied starving the boy but later told officers that he did not eat dinner roughly four nights each week. This frustrated her, according to the report, because he "liked everyone's cooking more than hers" despite her belief that hers was "more flavorful."

She said she was jealous of the child's relationship with her mother, police wrote, and she handcuffed him out of spite and to keep him from eating more after being sent away from the dinner table for not eating her cooking.

Tovias was said to have denied the allegations.

Miranda has five children, ages 5 to 17, and is pregnant, according to authorities. She is being held at the Washington County jail in lieu of $50,000 bond on charges that include second-degree domestic battery, aggravated assault on a family member and endangering the welfare of a minor, records show.

Tovias is also being held in lieu of $50,000 bond and charged with permitting child abuse, second-degree domestic battery and endangering the welfare of a minor. Both are scheduled to appear in court Feb. 28.

The report states the children were placed in foster care.