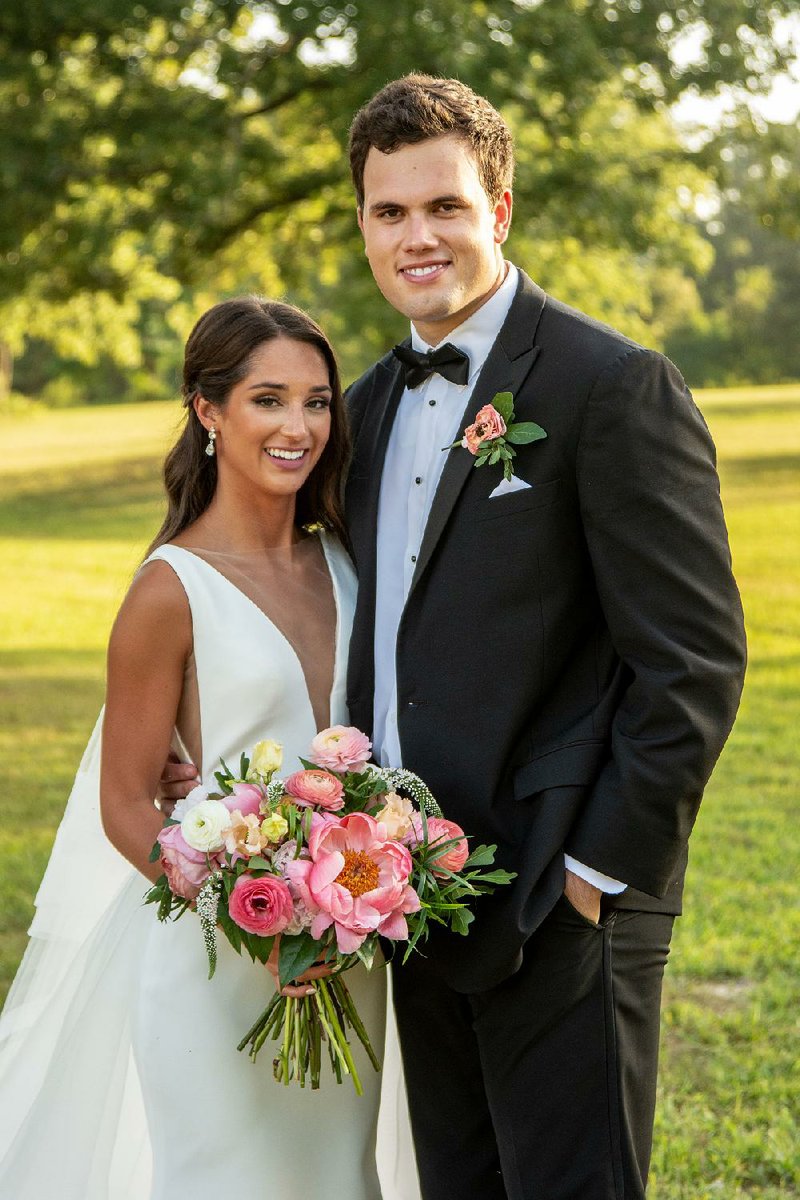 The Grandeur House was the setting at 6 p.m. Saturday, June 30, for the marriage of Parker Elizabeth Schmidly and Hunter Mark Henry. The father of the groom, a pastor at Fellowship Bible Church Little Rock, officiated.

Jenny and Mark Henry of Little Rock are the parents of the groom. His grandparents are Johnny Mac and Robert L. "Skip" Henry III and Marshall B. "Skip" Coffman Jr., all of Little Rock, and Michele and Charles Beale of Paron.

The outdoor ceremony took place in front of Grandeur House at a crescent-shaped arbor decorated with roses, ranunculus, peonies and greenery. Music was by Don and Terri Bailey who played the piano, flute and saxophone; Charles Schmidly, grandfather of the bride, on the piano; and Henri Schmidly, cousin of the bride, on the harp.

Given in marriage by her father, the bride wore a sleeveless pearl-colored gown of silk crepe with a plunging V-neckline and back. The fitted skirt flared at the knee and extended to a chapel-train. She carried a bouquet of peonies, roses, ranunculus, lisianthis and freesia in shades of coral, blush and gold.

Maid of honor was Shelby Snider of Little Rock, cousin of the bride. Bridesmaids were Allie White, Ellie Bilger and Hope Henry, sister of the groom, all of Little Rock; Brecken Ingram and Natalie Watson, both of Nashville, Tenn.; Kirby Moore and Kate Whitehurst, both of Dallas; and Savanna Spradlin and Lauren Vassar, both of Fayetteville. They wore blue chiffon gowns and carried smaller versions of the bridal bouquet.

Serving as the groom's honor attendants were his brothers, Hudson Henry and Hayden Henry, both of Little Rock. Groomsmen were Graves Schmidly of Fayetteville, brother of the bride; Jack Snider of Dallas, cousin of the bride; Austin Allen of Tampa Bay, Fla.; Brooks Ellis of Jacksonville, Fla.; Alex Brignoni of Fayetteville; Gray Harker of Kansas City, Mo.; and Zac Hernandez and Justin McVeigh, both of Dallas. Guests were seated by Toby Baker, Grant Pickle and Kile Graves, all of Fayetteville; and Spencer Pruitt, Ben Fortson and Chase Snider, cousin of the bride, all of Little Rock.

After the ceremony, a reception was held inside The Grandeur House. The music stage for the 12South Band was marked with large arrangements of pin oak branches, garden roses, peonies and hydrangeas. Buffets and tables held a variety of arrangements of roses and peonies in shades of gold, blush and coral.

The bride has a bachelor's degree in nursing from the University of Arkansas, Fayetteville. She is a registered nurse.

The groom studied general business at the university where he was a member of the Arkansas Razorbacks football team. He is a professional football player with the National Football League's Los Angeles Chargers.

After a honeymoon in Montego Bay, Jamaica, the couple will live in Newport Beach, Calif.