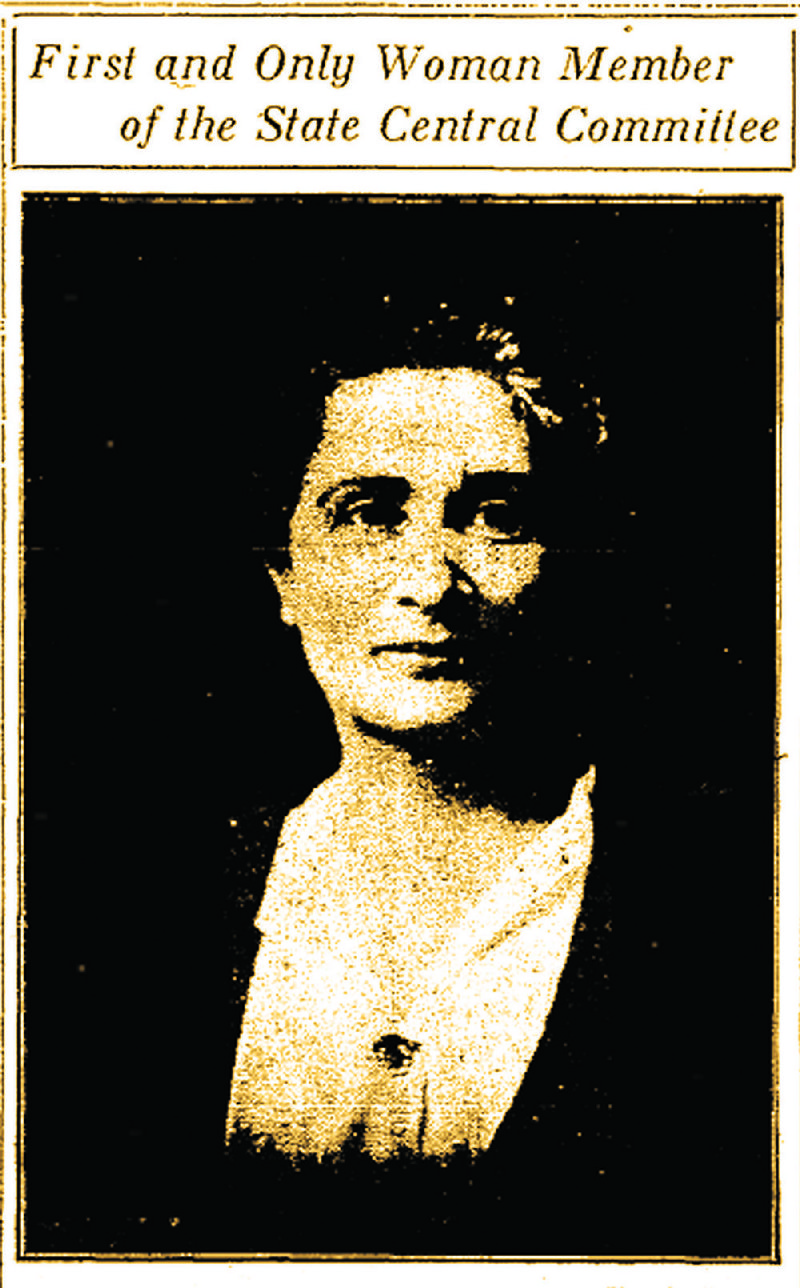 The July 12, 1918, Arkansas Gazette highlighted Mrs. Stella Brizzolara of Fort Smith, the first Arkansas woman elected to the Democratic State Central Committee, by a caucus at the state convention.

The news was full of uppity women 100 years ago.

On the prestige end of uppity, in the second week of July 1918, women made the front pages in the Arkansas Democrat and Arkansas Gazette for taking their seats as delegates to the state Democratic Party convention in Little Rock. This was a first for Arkansas.

As you know, because you have been paying attention, Gov. Charles Brough had signed Act 186 of 1917, allowing women age 21 or older to vote -- but only in party primaries. Limited suffrage was a step toward universal suffrage, and Arkansas was the first Southern state to take that step.

Heartened, suffragists reorganized as the Arkansas Equal Suffrage Central Committee, which lined up activists within the Democratic Party's wards and precincts. These influencers recruited other women while supporting the war effort, campaigning for war bonds and stamps, food conservation and the Red Cross.

Women cast their earliest votes in city primaries in November and December 1917; and then in May 1918, more than 40,000 women turned out to vote in the statewide primaries. In result, when the Democrats convened July 10 at Liberty Hall in Little Rock, more than 50 female delegates came with them, eager to do a good job.

As the delegates gathered, the Democrat announced that Mrs. J.D. Head of Texarkana had become the first woman to serve on the Democratic State Central Committee because she had sat in for her husband during a noon meeting in the Marion Hotel. I don't know if that was just lunch.

But the first woman actually elected to the party's ruling committee -- by caucus during the convention -- was Mrs. Stella Brizzolara, a widow from Sebastian County. Her husband had been mayor of Fort Smith, and she was a suffragist active in the drive for food conservation. The Gazette published her portrait atop its front page July 12, with her quote:

"One of the finest things about the convention, to my mind, was the consideration and gallantry shown the women members by the men."

Gracious, especially considering that anyone who had read the July 11 Gazette knew male gallantry slipped a bit when out of earshot of the ladies:

It was a rare treat to watch some of the old-time politicians of the male sex. They realize which way the wind is blowing and they could never be persuaded to express their real views, but in closely guarded conversations with trusted friends they all but sobbed their disgust.

They wailed that the women insisted on having every little detail explained to them and that the fair ones constantly were on the alert for fear that something might be put over on them in their unfamiliarity with the wiles of the politicians.

Women attended every minor meeting, in force, and "controlled the actions of some these committees ..."

Also July 11, Queenie Williams, a well-known downmarket character, had raised uppity hell at the hoosegow. Described as a large and buxom person, she was a familiar visitor at police headquarters, having been brought in early in May with three other black women for vagrancy and disturbing the peace.

Usually she is a cheerful, friendly sort of person, but yesterday she was possessed of a "fightin' jag."

Turnkey Shaver decided to help Patrol Driver Robbins conduct her to "her room." Coincidentally, Shaver had recently shaved his head, "the hair clipped so close that his head resembled a billiard ball," as the Gazette put it.

Queenie would not be conducted. The two men tried to carry her.

In her rage, Queenie grabbed a handful of Shaver's hair, but her fingers slipped harmlessly off the slippery surface, while Mr. Shaver grinned. But the grin didn't last long, for Queenie reached down and sank her teeth into Mr. Shaver's ill-protected scalp.

The reporter had a good time exaggerating the incident until it resembled something humorous, but I can't help wondering what had happened to upset Williams. You know she had a reason.

Another woman who appeared humorously intimidating in the July 12 Democrat clearly did:

It was with an evident feeling of pride that Mrs. A. Richards, a frail-built woman who resides near Forest Park, admitted in Judge Woodruff's court Friday morning that it was her trained eye that was looking through the sights on the barrel of a small-bore rifle as it barked spitefully and sent bullets whizzing in the direction of a drove of hogs browsing in her garden.

When a witness testified that Mrs. Richards fired eight shots, the defendant cheerfully declared from the dock that each one of her bullets had found its mark.

Unfortunately, four of the swine belonged to her neighbor, B.F. Thompson. He told the court that "the four aforesaid animals have passed into that bourne from which no hog has ever returned," as the reporter put it. Also, that she'd promised to go on killing his pigs if they came on her property.

The judge sympathized, because a fence-breaking hog is exasperating, but that did not give her the right to shoot her neighbor's swine.

Broken dishes of the pink and white variety, sufficient in number to fill a tray, were exhibited as evidence in Chancery Court yesterday. But the case was not a divorce suit.

Joseph Stalcup, a contractor living at 1022 Cross St., claimed Miss Minnie Hunt had broken the cups and the terms of a contract she'd made with him in 1908, to keep house for Stalcup and his wife for the rest of their lives. In exchange they deeded some property to her.

He charges that Miss Hunt, in a fit of anger, threw a tray filled with dishes on the floor, smashing them to smithereens and then trampled the fragments into the carpet. He alleged that Miss Hunt left his home in December, 1915, while his wife was still living.

Miss Hunt testified that she'd dropped the tray accidentally. She insinuated that Stalcup was a tightwad. Also, she said, she had been ejected from the home. Now she was employed as a fitter in a Main Street dry goods store.

And the more than 50 women who were delegates to the Democratic convention? They marched forward, step by step. 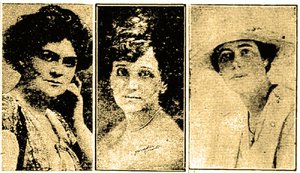 Photo by Arkansas Democrat-Gazette
These portraits of (from left) Mrs. Thomas Taylor Cotnam (Florence Brown Cotnam), Mrs. Frank W. Gibb (Mary Newton Gibb) and Miss Josephine Miller appeared on the front of the Arkansas Gazette of July 11, 1918. They were among the first women to attend the state Democratic Party’s convention as delegates.