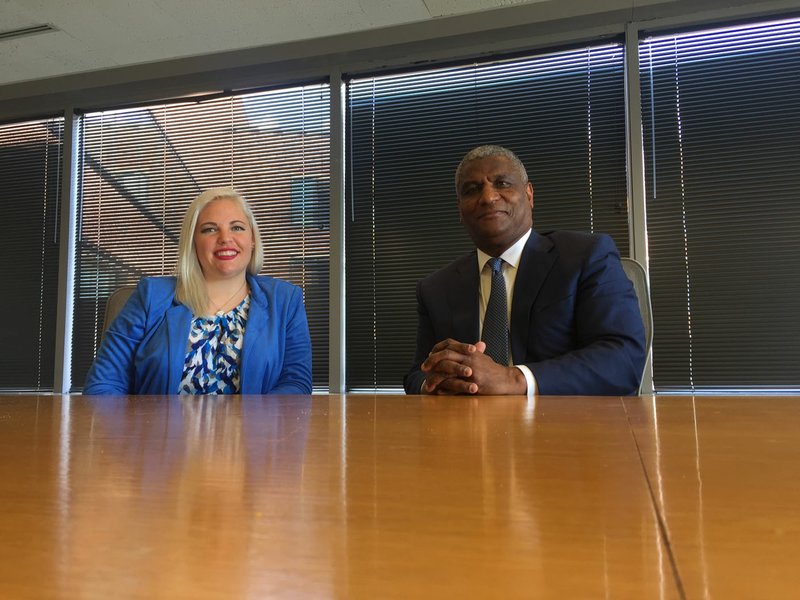 UA law student Katie Rose Martin meets with former U.S. Transportation Secretary Rodney Slater on Friday in Washington. Martin is the first student at the school in Fayetteville to receive a public-policy fellowship from the Squire Patton Boggs Foundation of which Slater is the board chairman.

WASHINGTON -- One of the nation's largest law firms is helping a student in the University of Arkansas, Fayetteville School of Law study landlord-tenant laws that affect domestic-violence victims.

Katie Rose Martin is the first student at the school in Fayetteville to receive a public-policy fellowship from the Squire Patton Boggs Foundation.

"We want this law school to be a part of our circle of legal lights," he said.

Annie Smith, an associate professor and director of pro bono and community service, said the fellowship is an opportunity for Martin "to deepen her experience in public interest practice while continuing to give back to the local community. As a student who has already dedicated herself to pro bono work through the law school, I know she will do great things."

In addition to researching the law, she also visited the firm's Washington office earlier this summer.

Martin, who is about to begin her third year of law school, is originally from West Virginia.

A graduate of the American Military University, Martin served in the Army from 2009-2014, then began looking at graduate schools.

"I wanted to make a difference in a big or small way. I thought the law would be a place where I could do that," she said. "It's really a cliche ... but I really did want to make an impact and leave behind something lasting."

"Her desire to live a life that is bigger than self is exactly what we look for in our Squire Patton Boggs Foundation Fellows," he said.

In an interview, Slater said foundation officials have been impressed by Martin.

"We think that she has a great story," he said.

Martin is doing her research at the behest of the Peace at Home Family Shelter in Springdale, which provides emergency housing and other services to victims of domestic violence.

"They have asked me to research Arkansas laws [and] the laws of everywhere else and see if I can come up with some best practices and possible litigation strategies for really extreme cases where ... tenants are struggling with their landlords," Martin said in an interview.

"There are these crime addendums that say if the cops are called three or more times, you can be evicted within three days. End of story. You're out," she said.

"So victims, if their abuser finds them, they either call the cops and potentially get evicted or they suffer the consequences of being found."

Martin said she hopes to "find a happy medium; something that is OK with ... the landlords and is helpful to the tenants."

Since 2004, more than 200 students have received public-policy fellowships from the foundation, including 18 this year. Recipients each receive a $5,000 award.

The law firm seeks students from a short list of law schools, including those at Yale University, Georgetown University and the University of Texas. With Slater's support, UA has been added to the roster as well.

Most of the 20 or so law schools are in cities where Squire Patton Boggs has offices.

While lacking an Arkansas location, the 1,500-attorney firm does have offices in Texas.

While lobbying for Fayetteville, Slater said he was able to share with his colleagues some of the UA story, including the law school's integration in 1948.

"Arkansas was the first school in the South to admit people of color since Reconstruction," he said.

When decision time came, people were eager to include Arkansas, according to Slater.

"Everybody was just gung-ho to be a part of that," he said.