VIDEO: Don't act your age, bike it on the Razorback Greenway 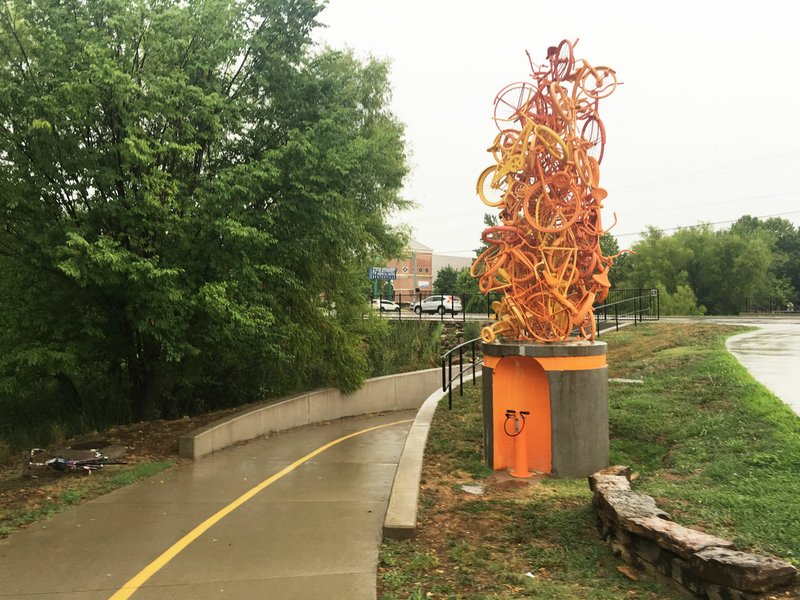 NWA Democrat-Gazette/FLIP PUTTHOFF Riders pass a bicycle sculpture July 1 along the Razorback Greenway where it goes under Walton Boulevard in Bentonville.

When it becomes a wheezer of a chore to blow out the forest of candles on your birthday cake, the next challenge might be to hop on your bike and ride your age in miles.

Biking your age is a big deal for any rider. For a 10-year-old, riding ten miles with mom and dad is a lofty goal. When that birthday cake sports 40, 50 or more candles, biking your age in miles is a healthy way to celebrate. You'll bask in the glow of personal accomplishment, even as your rear might say "job well done."

The Razorback Greenway is the perfect trail to bike one's age. There's no traffic worries, except crossing some busy intersections such as Southeast J Street in Bentonville or U.S. 412 in Springdale. Bike it early on a Sunday and those concerns vanish.

I found out that's true July 1 on my third bike-your-age ride in as many years. First light penetrated the dark, cloudy morning when I hit the trail at 5:25 a.m. that Sunday. Believe me, no one is out there. From Lake Bella Vista to the Horsebarn trailhead in Rogers, I saw two runners and one biker.

The original Razorback Greenway runs for 37 miles from Lake Bella Vista to south Fayetteville. It's a tad longer now with more trail added on the south end. A one-mile northward extension between Lake Bella Vista and Blowing Springs Park in Bella Vista opens with a ribbon cutting at 9 a.m. on July 28.

There wasn't a car in sight that Sunday crossing Southeast J Street. At U.S. 412 in Springdale, I didn't really need to press the pedestrian signal button, but did anyway. Oh, this was cycling heaven, far different than my first two bike-your-age treks which were on Mondays. Sunday is the ticket.

From Lake Bella Vista, I pedaled south, alone in the cool, gray morning. Daylight didn't really arrive until I passed Crystal Bridges Museum of American Art. I meandered on down the greenway and into Fayetteville. The stream of bikers, runners and walkers grew as the miles passed. People were enjoying a cool, cloudy morning and a break from the heat. After circling Lake Fayetteville, I pedaled north back to Lake Bella Vista to complete my 63.5-mile bike your age ride.

Now that I've finished my third one, I'm here to offer some tips and a game plan that works for any long ride on the greenway.

Get an early start and head south. The earlier, the better because there's usually little or no breeze in the early morning. There won't be a headwind as you bike south. When the prevailing summer southwest wind kicks up later in the day, you'll have a nice tailwind push as you head back north.

Go on a Sunday if you can.

It's good to recruit some biking friends to ride part or all of the way. My first two birthday rides were solo all the way. This trip, two friends from our little Tour de Madison County bicycle group joined me for 12 miles. We met up at Shiloh Square in downtown Springdale and pedaled north to Rogers. After a break for some coffee, my pals returned to Springdale, and I biked north toward Lake Bella Vista.

I don't have an odometer on my old Cannondale road bike, but it's easy to track the distance with the mileposts set up along the greenway. Riders can mix it up by traveling the greenway, plus spur trails like Fayetteville's Scull Creek Trail, Blossom Way Trail in Rogers and the Trail of Two Cities in Bentonville and Rogers.

A thunderstorm with lightning kicked up when I rolled by Village on the Creeks shopping area in Rogers. I ducked into a covered parking garage, alongside three Rogers Police Department bicycle patrolmen. Once the lightning and downpour let up, it was a delight biking in a light, refreshing shower the rest of the way.

If you're carrying around an AARP card, biking your age in miles may seem like a lot. But when all you've got to do all day is pedal a bicycle you can cover some ground. If miles seems a bit foreboding, a birthday ride in kilometers might be the ticket.