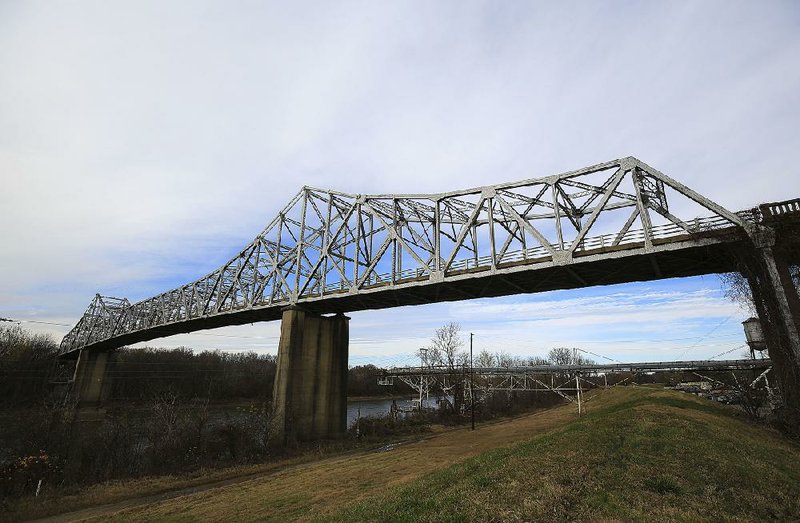 The old U.S. 79 bridge at Clarendon is no longer open to traffic and is scheduled to be torn down in the coming months, but a group fighting to save the bridge and turn it into a bike and pedestrian trail hasn’t given up. ( Staton Breidenthal)

The former U.S. 79 bridge in Clarendon -- an 87-year-old span that the city had hoped could be turned into an economic development engine for Arkansas' ever-struggling Delta -- is much closer to coming down, although the exact day and hour has not been set.

Bridge supporters could not put together a deal to save the span in time to meet the deadline Pulaski County Circuit Judge Chris Piazza set in May.

Sovereign immunity -- Arkansas' near-total protection from lawsuit -- cannot be overcome, Piazza told attorneys for the Monroe County taxpayers who had banded together to get a court order to stop demolition of the bridge.

"In my point of view, it's a waste of a good asset but I don't get to vote," Piazza said. "This ... is out of my hands. I think sovereign immunity takes us out of this."

Demolition can begin once Piazza's order is officially put in writing. The sides were still arguing over the exact language to be used to convey the judge's reasoning at the end of the day Wednesday. The written order needs to be in place before the bridge group can petition the Arkansas Supreme Court to intervene.

The bridge across the White River near the mouth of the Cache River was built in 1931 to replace the ferry that had carried cars across the water. The original steel span sent traffic through town. Its modern descendent, while much safer than its predecessor, diverts U.S. 79 traffic past Clarendon.

Both bridges are in federal wildlife sanctuaries managed by the U.S. Fish and Wildlife Service, which will have the original span torn down to allow the area to return to nature.

An eight-member taxpayer group banded together to sue the state agencies responsible for implementing the Wildlife Service's demolition plans: the Arkansas Highway Commission and the Arkansas Department of Transportation.

The state's position is that bridge fans waited until the last minute to try to upend a plan that had been in the works for 18 years. The bridge supporters had years of chances to challenge the demolition plan but either did not or could not, the state lawyers told the judge. Federal funds paid for the new bridge on condition that the old bridge property return to its natural state as wetlands, they said.

When Piazza temporarily blocked the demolition in May, he said the delay was the best he could do in the face of compelling arguments by lawyers from the Arkansas attorney general's office, representing the state agencies, that the suit should be dismissed for, among other reasons, sovereign immunity.

Wednesday was the last day for the bridge group who had sued to block demolition to make arrangements to save the structure.

An effort to schedule talks between Stacy Hurst, the director of the state Department of Heritage, who had taken an interest in trying to save the bridge, and representatives of the U.S. Department of Fish and Wildlife, which wants to remove the bridge, were promising last week, Little Rock attorney John Gill told the judge.

But on Monday, the federal agency abruptly -- and mysteriously -- withdrew the meeting invitation, Gill said, saying the effort to save the old bridge was deliberately "sabotaged." He suggested there had been "obstruction of justice." Only a trial could ferret out the wrongdoers, Gill told the judge.

Gill declined to point a finger at anyone, but he also complained that the state lawyers had not made any effort to help him and his clients work out a way to save the bridge, although the judge had told them to do so.

Gill also accused the state lawyers of deliberately misstating claims the plaintiffs had made about having support in the White House and the Department of the Interior, which oversees the wildlife service.

Deputy Attorney General Monty Baugh said he stood by every word of what he'd said about the plaintiffs' case. He told the judge the defendants were the ones who'd broken their promises to drop the litigation if they couldn't find a way to rescue the bridge.

Clarendon had hoped to see the span converted into something to draw visitors to the area, like a bird-watching and wildlife observation station. A citizens group, Friends of the Historic White River Bridge at Clarendon, were working to convert it into hiking and biking trails.

Gill said the federal agency was "squandering" $11.3 million to raze the bridge. Supporters said spending less that half that amount was all it would take to save it.

The bridge plaintiffs described the steel structure as "a symbol of American strength, craftsmanship and freedom of expression. It is an engineering marvel and a core part of Arkansas history that ... [sits] near the original road from Memphis to Little Rock [and] on the route of the historic Trail of Tears." 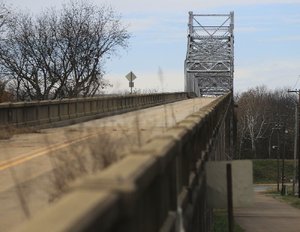 Photo by Democrat-Gazette file photo
Demolition of the former U.S. 79 bridge in Clarendon can begin as soon as Wednesday’s order by Pulaski County Circuit Judge Chris Piazza is officially put in writing.

CORRECTION: The old bridge across the White River near Clarendon that is scheduled for demolition is located on U.S. 79. A graphic that ran in Thursday’s editions and was previously included with this story incorrectly identified the highway where the bridge is located.