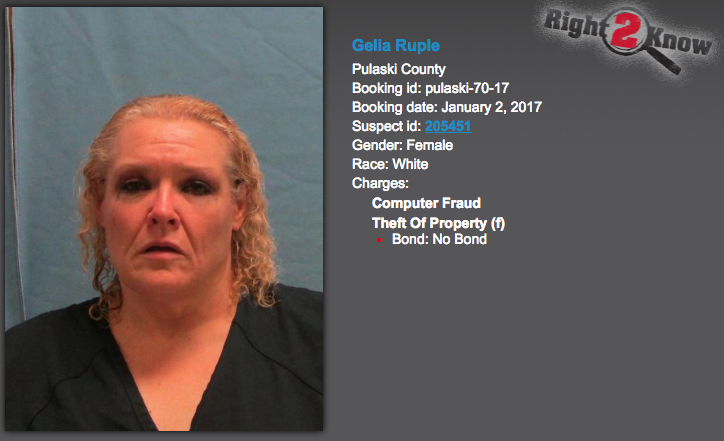 A Vilonia woman, already on her way to federal prison for embezzling $88,000 from a Russellville employer, admitted on Monday to stealing more than $5,000 from the Little Rock company that next hired her, the nonprofit agency that coordinates organ transplants in Arkansas.

Almost exactly 18 years after she was exposed as the mother of "Vilonia's Little Angel," a dead newborn found in the trash, Gelia Melissa Ruple, 52, promised to repay the money she stole from the nonprofit headquartered in the capital city.

The Angel was the name Vilonia residents put on the tombstone of an otherwise nameless infant girl found dead in a 55-gallon trash bin near a home on Arkansas 107 in September 1997.

A garbage hauler discovered the 8-pound, 5-ounce body in a trash bag in the container. He only examined the bag because he thought it might contain animal remains, which he was prohibited from handling.

Two months later, following an autopsy, the baby was buried in a donated plot in Vilonia Cemetery before an audience of about 250 mourners in a service that brought five area churches together.

Medical examiners could not determine how The Angel died or whether she was born alive, which prevented murder charges from being filed.

A Beebe woman was arrested the next year on an abuse of corpse charge, the maximum charge prosecutors said was available, but she was cleared by DNA testing several months later. The woman had also had her tubes tied 10 years before The Angel was born.

Ruple was charged with abuse of corpse in May 2000, about two months after Faulkner County authorities announced that they had collected DNA from another suspect.

Immediately after being arrested, Ruple pleaded guilty to the charge in exchange for six years on probation and a $3,500 fine. Extensive psychiatric counseling was also a probation requirement. The Class D felony charge carried a maximum sentence of six years in prison.

Ruple testified that The Angel was stillborn when she put the body in the trash but did not explain why she did that. Her lawyer told reporters that Ruple did it because she panicked after giving birth at home.

Investigators told the Arkansas Democrat-Gazette in May 2000 that Ruple had been a suspect at first but that their probe found that she had gone to work the day the remains were found as if nothing had happened. A heavy-set woman both then and now, neighbors told the newspaper that Ruple never appeared to be pregnant.

Monday, Ruple pleaded guilty in Pulaski County Circuit Court to felony theft and fraudulent use of a credit card, charges that together carry up to 16 years in prison, in exchange for a sentence of five years on probation.

According to the plea deal negotiated by her attorney, Pat Ayedelott, to keep from having to go back to prison Ruple will pay a $1,000 fine plus full restitution to her former Little Rock employer at $89 per month once she gets out of federal prison. She's due to report to prison in September to begin her 15-month stint for wire fraud.

She'll have to pay back $88,000 in that case, which involved her and an assistant stealing funds from Transco Lines Inc., a Russellville trucking company, between October 2014 and 2015.

Her LinkedIn account describes her as the company's fiscal controller from June 2014 to April 2015.

Thefts from her next employer, the Arkansas Regional Organ Recovery Agency on Aldersgate Road in Little Rock, were discovered after she was fired in March 2016 as the company's director of finance and information technology, about eight months after she was hired.

She was said to have earned $75,000 in Russellville and about $100,000 working for the organ recovery agency, commonly referred to as ARORA.

According to a police report, company President Alan Cochran went to police about a month after firing Ruple in March 2016, saying he'd discovered discrepancies in the company credit card spending which turned out to be purchases that did not appear to be business-related.

ARORA was established by the federal government to encourage organ and tissue donations and to get those biological materials to the patients who need them.

Cochran said he'd also discovered that Ruple had linked a PayPal account to the ARORA bank account and made further purchases that did not appear to be business related.

He told investigators that Ruple withdrew $400 using PayPal 30 minutes after he fired her. There was also money missing from the petty cash fund that was kept in her office, Cochran reported. He said he was able to change the PayPal password but could not shut the account down without her authorization.

The company had mailed Ruple a letter about the spending and missing money but she never responded, the police report said.

Cochran said Ruple had passed an initial background check because her convictions were more than 7 years old. He told police he'd fired her after learning about her criminal past, which also includes a 1994 federal conviction for fraudulently filing electronic tax returns with the Internal Revenue Service worth $60,000. She was sentenced to a year in a federal halfway house that year.

Ruple was a self-employed certified public accountant at the time. She admitted preparing 40 fraudulent tax returns in 1993 for the 1992 tax year. Her attorney at the time said she'd likely never work as a CPA again.

"I know what I did was wrong," a crying Ruple said at sentencing. "It has totally destroyed my whole life. It has ruined my life."