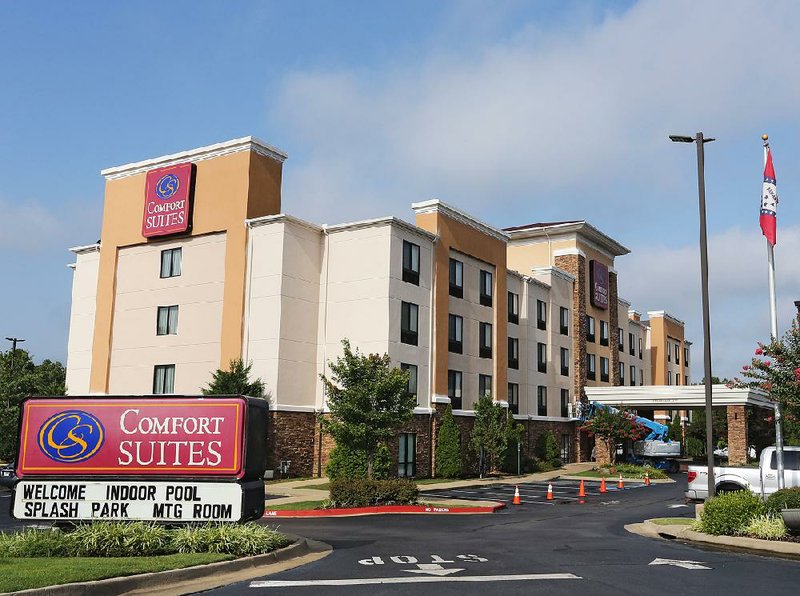 The four-story hotel, built in 2010, is near Shackleford Crossings shopping center.

LR Markham Apartments borrowed $5.2 million from the Farmers and Merchants Bank of Stuttgart to help finance the acquisition. The mortgage matures in 2021.

LR Markham Apartments LLC and LR Markham Hotel LLC are affiliated companies. Each one has the same address in Conway, and Nimesh Sitaram is an officer for each one.

The seller was KDV Inc.

Conway Management Inc., also at the same Conway address, already owned at least 15 hotels -- four in Conway (a Candlewood Suites, a Comfort Inn & Suites, a Custom Suites and a Holiday Inn Express & Suites), five in Little Rock, two in North Little Rock, one in Benton, one in Bryant, Lindsey's Resort in Heber Springs and one in Columbus, Ohio.

A call to Patel, president of Conway Management, seeking comment was not returned.

One of Little Rock's longest-standing shopping centers, Town & Country, was sold on Monday for $3.8 million.

It was considered one of the city's first modern shopping centers. Early tenants included Kroger, Franke's Cafeteria and the predecessor of Bank of America, which has remained a tenant for 62 years.

AR Fortune Group was incorporated in May by Hua Mei Chen, who is also the registered agent and manager. Also signing the mortgage as members of AR Fortune Group were Yan Mei Ni, Yu Sheng Xiao, Hui Yu Weng and Fei Jian Weng.

"Town & Country has been a staple of the Little Rock retail scene for more than 60 years," Lewis said. "The center continues to be well-leased, and it will make a great investment property for the new ownership group."

Colliers International will continue to lease and manage the center.

The property, which was appraised at about $675,000 this year, will be used to build a Kum & Go convenience store.

Work began a few weeks ago at the store, said Kristie Bell, Kum & Go's director of communications. It should open early next year, she said.

There are 48 stores in Arkansas, Bell said. The first Kum & Go in Arkansas opened in 1998, she said.

The LLC borrowed $1 million from Conway-based Centennial Bank. Samuel Mark Brockinton II is manager of 2100 Brookwood. John C. Lessel is an officer of the firm.

The seller was Stamja-LP AR Properties LLC, which was incorporated in 2012.

The managers of Stamja-LP are Stephen LaFrance Jr. and Jason LaFrance. Walter M. Ebel III is an officer, and Bryce Good is the tax preparer.

The seller was PB General Holdings (Pike) LLC. Price Gardner and Leonard Boen are managers of the firm. Boen is also the registered agent.

Gardner, a Little Rock lawyer, is listed as an officer on more than 45 similarly named limited liability companies.

Unity Property borrowed $744,000, of which $241,000 can be used for renovation and the remainder used to finance the purchase. Regions Bank made the loan. The mortgage matures in more than 25 years.

The sellers were R and J Realty Warehouse LLC and Garden Holdings LLC.

The store, a Victory Lane Shell station, is located at 1801 Military Drive.

The seller was Victory Lane Inc., which was incorporated in 2005.

Anwer Hemani organized Gas N Go Investments in April and is also the registered agent. He signed off on the mortgage.