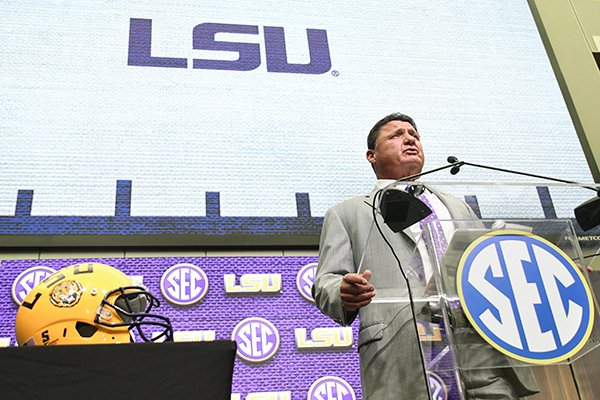 ATLANTA -- If the leaders at LSU see 2018 as a barometer year for Coach Ed Orgeron, then the gravel-voiced cajun will enter the fall under the gun in Baton Rouge.

The Tigers were picked to finish fifth in the SEC West at SEC media days last week, and that kind of finish would stir up the Tigers faithful and crank up the pressure on Orgeron, who is 15-6 in one full season plus his partial interim year in 2016.

Tigers at a glance

SEC title scenario The Tigers sustained huge losses in skill position talent and across the defense. Settling on a quarterback in the early going and getting a fast rise from Dave Aranda’s defense will be critical with early tests against Miami and Auburn.

Sixth in a series previewing the 2018 SEC football season

Orgeron seemed more at peace with where he, his staff and the program are during his appearance at SEC media days.

"No question about it," Orgeron said. "We have the staff that we'll go to battle with. I trust these guys.

"We're more equipped to be able to compete in the SEC. So yes, I feel more comfortable, and I love coaching at LSU."

Orgeron said defensive coordinator Dave Aranda, starting his third year at LSU, could excel at any level of football and that he'll be more free than ever to unleash his schemes this fall. Orgeron also said promoting Steve Ensminger to offensive coordinator was the move he should have made last year when he brought Matt Canada on board for one rocky season.

Orgeron and Canada reportedly clashed over schemes early on, and the parties reached a settlement for Canada to leave after the Tigers' 21-17 loss to Notre Dame in the Citrus Bowl.

"I went out and tried to get the best coordinator in the league ... for our football team and it didn't work," Orgeron said. "And all the while I was saying: 'You know what? Steve Ensminger is the guy, and if I have a chance, I'm going to hire him.'

"I have complete confidence in the direction that he's going to lead this offense. He and I are on the same page."

Ensminger, formerly the team's tight ends coach, did well as the interim coordinator for Orgeron after Les Miles' dismissal early in 2016, but the former LSU quarterback took a step back last year.

"I'm more comfortable with Steve," Orgeron said. "He's able to adapt to the things that we want to do as a staff. I think he's an excellent game-day caller. He knows our players, and he's a great recruiter."

The first order of business for Orgeron and Ensminger is putting together skill position pieces, starting with quarterback.

The group of sophomore Myles Brennan, junior Justin McMillan and freshman Lowell Narcisse was bolstered during the summer by the transfer of Ohio State quarterback Joe Burrow.

"We feel that Justin, Myles, Lowell are three excellent quarterbacks," Orgeron said. "We're going to let this thing play out and let the best man win."

Tight end Foster Moreau, who hosted Burrow's visit to Baton Rouge, said the competition will be intense at quarterback.

"It just makes our quarterbacks want it all that much more," he said. "It's like taking a pie and instead of cutting it into thirds, you cut it into fourths. The competition's really going to heat up come this fall."

Replacing Derrius Guice, a 1,251-yard rusher last season, and backfield mate Darrel Williams will not be easy. For the first time since at least 1974, the Tigers do not have a returning running back who has scored a rushing touchdown.

Nick Brossette, Clyde Edwards-Helaire, Tae Provens and Lanard Fournette are in contention at tailback along with freshman Chris Curry.

The dearth of proven talent extends to receiver, where transfer Jonathan Giles is likely to become the top target. Giles had 69 catches for 1,158 yards and 13 touchdowns at Texas Tech in 2016. His potential is reflected by his jersey No. 7, worn previously by Bert Jones, Leonard Fournette and Tyrann Mathieu.

The left side of LSU's line, with tackle Saahdiq Charles and guard Garrett Brumfield, is solid while the rest of the unit must come together.

The Tigers have building blocks on defense in junior linebacker Devin White, the SEC's leading tackler with 133 last season, and cornerback Greedy Williams, who is projected as a first-round NFL Draft pick next year by many analysts.

Aranda's deal at LSU was fattened to $10 million guaranteed over four years after Texas A&M came calling, putting him in the stratosphere of assistant coaches' salaries along with Clemson's Brent Venables.

The Tigers appear salty on the defensive front, where Breiden Fehoko, another Texas Tech transfer; Tyler Shelvin, who was shelved by academics in 2017; and returnees Rashard Lawrence and Ed Alexander should be standouts.

The schedule won't be easy. The Tigers open against Miami at AT&T Stadium in Arlington, Texas, and they travel to Auburn, Florida and Texas A&M in addition to the University of Arkansas, Fayetteville. They also play a cross-division game against defending SEC champion Georgia.

The Tigers will play at The Swamp in Florida for the second consecutive year, the result of the teams playing their 2016 game in Baton Rouge after a hurricane threat postponed the originally scheduled game in Gainesville, Fla.