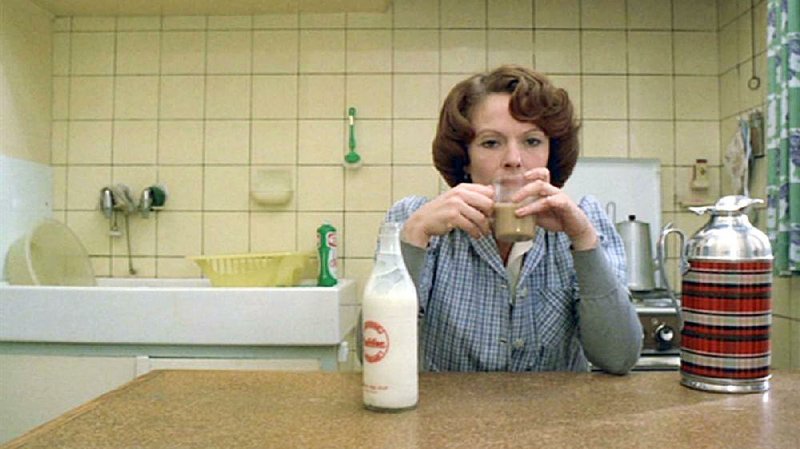 And lo, we have reached the end of the line with the final five films on my list -- at least for this year. It has been a fascinating undertaking, screening such a bevy of significant films from all eras and countries.

With a project like this, designed to watch mostly brilliant films, there were still a couple of clunkers -- uneven horror films, thy shall always be my undoing -- but the vast majority were awfully good, and some utterly unforgettable. Because anything begun with a list, should also end with one, here is one final tally, the best five films I saw in this series:

1. Paranormal Activity (2007): Utilizing its decidedly (and honestly come by) lo-fi production value to good effect, Oren Peli's found-footage thriller, about a young San Diego couple (Katie Featherston and Micah Sloat) haunted by an unseen demonic force over the course of three weeks, works as well as it does precisely for its limitations.

Without the benefit of documentary perplexity -- despite its verite style, unlike The Blair Witch Project, few would confuse it for the real thing -- it nevertheless delivers tension because of the specificity of the location and the characters.

Katie claims to have been haunted by this force since turning 8, and wants only to placate it as best she can until it slinks away again; her day-trading dingus of a boyfriend, Micah, feels threatened in his own (town)home, and keeps trying to challenge the force ("is that all you got?") until he gets far more than he has bargained for.

Shot in a suburban subdivision that is all-too familiar -- textured walls, faux-micro suede couch, foam core doors, and horrible throw rugs -- with a pair of characters who seem almost distressingly mundane (she's a student, he's full of his own burgeoning financial clout), the film disarms us in preparation for its ever-increasing payload of scares. One scene near the end, with poor Katie dragged by an unseen hand out of the bedroom is shockingly effective; as is the simple act of her standing up as if in a fugue state and staring at her boyfriend motionlessly for more than an hour.

By revealing as little as possible -- except for the literal last shot, suggested by none other than Steven Spielberg, who predictably chooses to show too much -- Peli's film allows us to fill in the details, and as Spielberg discovered in making Jaws, what an audience doesn't see can be vastly more effective in terrifying them than what is actually on the screen.

Living with her teenage son (Jan Decorte), still in school, Jeanne's life is a constant stream of mundane detail -- more than slightly OCD, she purposefully cleans everything as she goes, constantly striding through their flat, turning on a light, getting a task done and then switching the light off again -- only broken up by the occasional trick she turns for spending money.

She cooks dinner -- some form of meat, some form of potatoes (usually boiled) -- cleans the dishes, shops for groceries, stands in line at the P.O. But what sounds like something dreadfully dull, the very type of existence most people are attempting to escape by going to the movies in the first place -- in the hands of the skilled Akerman, working with long, static-camera shots of exquisite placement, begins to add up into something vastly more significant: A window into the soul of a woman beginning to crack from the strain of extreme self-repression.

Any attempts to sway her from this muted path -- as when her son tries to speak to her about his late father -- she brushes aside as adroitly as a wrinkle from her bedspread, but by the third day of this study, small fissures begin to show, as subtle as they might be: She overcooks the potatoes one evening, forgets to turn off a light switch, makes a dissatisfying urn of coffee.

Because these are the details that comprise her existence -- Akerman is at pains to show Jeanne largely without much of an inner world -- we understand the true gravity of these seemingly minor setbacks, all of which quickly accumulate into an act far more demonstrative. A mid-'70s feminist screed, the film offers a definitive account of what happens to the human soul when it is put in constant lockdown, and the results suggest nothing less than revolution.

3. In the Mood for Love (2000): Sensual and lush, Kar Wai Wong's love story begins in Hong Kong in 1963, and seems to carry with it an entire long-gone era in a city now hardly recognizable to itself.

Two married couples coincidentally move into adjoining apartments on the same day: In one, Chow Mo-wan (Tony Chiu Wai Leung), a newspaper reporter and his wife; in the other, Su Li-zhen (Maggie Cheung), a travel agent secretary, and her husband. When each other's spouses connect and essentially leave their respective marriages for their affair, Chow and Su spend more and more time together, lamenting their situations.

Soon enough, Chow falls in love with Su, but feel as she might, she is adamant that they not get together the way their cheating spouses did. Instead, they spend huge amounts of time together, eating, talking, working on Chow's martial arts pulp novels, without actually becoming physically romantic. When Chow eventually gives up the ghost and moves to Singapore, they are both bereft, but can't seem to turn course.

By the time this film was released, Kar Wai Wong had already established himself with Chungking Express and Happy Together as a filmmaker of glorious visual depth and a deep understanding of the melancholia of love; with this film, notably released at the turn of the millennium, he consecrated his aesthetic.

Beautiful and beguiling, the film manages to incorporate the tactile and the emotional -- in the beginning, Su and Chow spend much of their time alone down in a nearby basement noodle shop that fairly glistens with portent and rich ambience -- as food, music, and early '60s Hong Kong fashion establish a visual palette of extraordinary sensuousness. Considering its substantial restraint, it might be one of the most seductive films of the decade.

4. The Big Sleep (1946): Penned by William Faulkner and Leigh Brackett, based on the complex Raymond Chandler novel, the plot gets so intricate and confusing, even the director Howard Hawks was said often to have little idea of what was actually going on in the story.

While it may or may not make airtight sense -- and good luck trying to figure that one out when a key murder remains unresolved by the end of the film -- its appeal is largely in the snappy dialogue, and the two-fisted delivery by stars (and actual lovers) Humphrey Bogart and Lauren Bacall.

Beset by their real-life tortured romance -- Bogart was married at the time to Mayo Methot as the production was taking place -- the two leads produced a fiery sort of chemistry, added to in the film's extensive reshoots, some months later, after the pair had been newly married, that carries us past some of the more confusing plot configurations.

Stylish and expansive, repping Chandler's epic vision of Los Angeles as a cesspool of rich and conniving hucksters, gangsters and Hollywood stars, all blackmailing and double-crossing one another in a hopeless, cyclonic bid of ego, illicit gain, and endless one-upmanship, it also features Bogart in one of his classic, hard-bitten roles (enjoined as he is by his iconic trench coat), still soft on the dames, and they on him.

He might never have played a character more attractive to the ladies, who at Hawks' behest, made as if his Marlowe character was irresistible. Faulkner eventually left Hollywood far behind to return to his beloved Oxford, Miss., but he still stuck around long enough to make a sizable impact on cinematic history.

5. Being John Malkovich (1999): And we close this list with the film that initially inspired the entire idea of the series: Too many people over the years expressed incredulity that I hadn't yet seen this Charlie Kaufman-penned peculiar comedy.

As with many of his other projects -- including Adaptation, Synecdoche and Eternal Sunshine of the Spotless Mind -- Kaufman straddles the line between comedy and disturbing psychosis. It's as if he invites you in with his quirky sense of humor -- much of the film's early material, the half-floor, the deaf receptionist, the puppeteer with delusions of grandeur, slayed me -- but then lets you linger beyond the joke, and revels in the awkward aftermath of the punch line.

John Cusack plays the puppeteer, devoted to his craft and somewhat delusional about his prospects thereof. Forced by his caring wife (Cameron Diaz) into taking a job, he becomes a file clerk on the 7 ½th floor of an office building, where he falls in love with a fellow hallway tenant (Catherine Keener), and, as one does, discovers a portal whereby he can enteractor John Malkovich's head for 15 minutes at a time before being spat out somewhere outside New York on the Jersey freeway.

Like fellow oddball screenwriter Mike White, Kaufman's work enjoys its awkward ungainliness; like Cortazar, his conceits are fueled by the darker underbelly of the subconscious; like Kafka, he has a penchant for allowing his metaphors to bleed into actuality, with fascinatingly surreal results. A Kaufman flick is like going to a dinner party in which the hosts are in a brutal fight, the guests are miserable, and the food is excellent -- you'll enjoy yourself, but you'll likely suffer along the way for it. 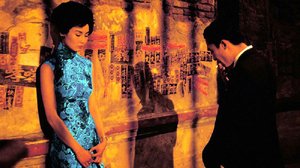 Neighbors Chow Mo-wan (Tony Leung) and Su Li-zhen (Maggie Cheung) commiserate as their spouses conduct an affair in Wong Kar-Wai’s In the Mood for Love (2000).