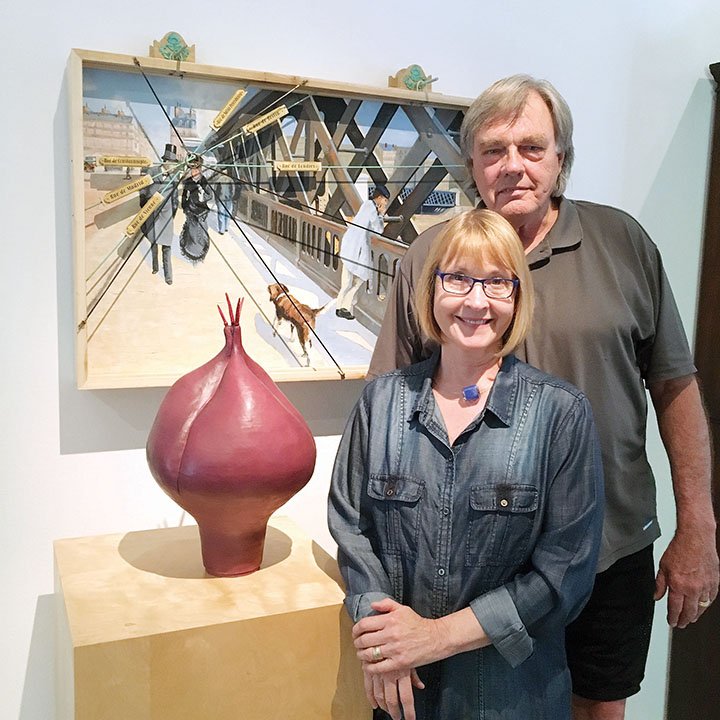 Barbara Satterfield and her husband, Jim Volkert, of Conway are among local artists with works in the 2018 Delta des Refusés, which will open Friday in Little Rock. Satterfield titled her sculpture Four Stigmata. Volkert titled his artwork Century Museum Teaching Frame: After Caillebotte.

The exhibition will be on display through Aug. 25 in the Underground Gallery of the Butler Center for Arkansas Studies and in the Third Floor Gallery of the River Market Books and Gifts

store in the Cox Creative Center.

The public is invited to an opening receptions from 5-8 p.m. Friday at both locations, coinciding with the 2nd Friday Art Walk. Many of the local artists plan to attend the reception. Artists will also participate in the July and August downtown Little Rock art walks.

Barbara Satterfield and her husband, Jim Volkert, of Conway are among local artists participating in the upcoming exhibit. They were also part of the 2016 show; Trusty was unable to “secure a location for the show in 2017.

“The Delta des Refusés was started in 2015 and is scheduled to coincide with the Delta Exhibition,” said Trusty, who teaches art at the University of Arkansas Community College at Morrilton. “The 2018 Delta des Refusés is the largest show in the exhibition’s history, with 105 artists from three states participating.

“Conceived in the spirit of the original Paris Salon des Refusés from 1863, the Delta des Refusés hopes to challenge the traditional authority of juried taste by allowing any artist who was rejected from the Delta Exhibition to exhibit in the show.”

“He was thrilled,” Satterfield said of Volkert’s reaction to being selected for the 2017 Delta Exhibition.

“My ceramic sculpture Moon Pod was selected about 10 years ago [for the Delta Exhibition], and I haven’t had work selected since,” she said, laughing.

He said the piece is based on Gustave Caillebotte’s The Bridge of Europe, 1875, depicting the area around Le Gare St. Lazare. He said the two removable frames mark the confluence of roadways to major European cities and the alignment of lines of perspective. Volkert said Caillebotte “tinkered with perspective to bring both to the single, tense point between the strolling gentleman and the prostitute.”

Satterfield’s 2018 Refusés piece is titled Four Stigmata. It is an earthenware sculpture, coil-built and finished with stains, encaustic and press molds of tulip-tree-blossom stigmata.

She said the form of Four Stigmata mimics that of a full bud about to flower; however, the work features the woody stigmata that remain after the flower has withered and died.

“It is a composite illustrating the passage of time in a flower’s life: the beauty of potential, the inevitability of its passing season and the role of the stable stigmata that holds it together during that process,” she said.

Following is a look at the other local artists with works in the 2018 Delta des Refusés, each of whom praised Trusty for her work on the exhibition:

“I entered the Delta des Refusés show because of my experiences with Refusés shows in the past in different places I have lived,” said Don Byram, who lives in Conway. “The works in these shows are always just as good as the parent shows. You can never get all the work that deserves to be shown in a juried show, so Refusés shows are useful to show ‘the best of the rest.’ They also tend to be a little less stressful and have more of a playful attitude and feel to them. And as artists, we are always looking for any opportunity to show our work.

“The Butler Center is one of the premier locations to show work in central Arkansas, and it would be silly to not take this opportunity to be part of something much larger. It is a wonderful opportunity and should be lots of fun.”

Byram creates archival photographs. He titled his work in the upcoming show And She Was.

Carol Corning lives in Clinton and grew up on a 150-acre farm in a family of 10. Her work reflects her rural upbringing.

“My latest works are inspired by my mother, who was an avid quilter,” Corning said. “The glass quilts are reminiscent of the quilts she made for her children, grandchildren and friends. Whether I’m assembling quilt blocks or creating scenes of women from the era I grew up in, my stories are about a simpler time.

“I am drawn to color and light through the use of glass, and my work is constantly changing as I experiment with glass and found objects.”

Sara Daily is a full-time oil artist at Lemley House Art Guild in Russellville. This is her first time to participate in the Delta des Refusés.

“My body of work consists of portraits, landscape and still life,” she said. “The piece in the show, 4th of July, is from a family photo taken in 1919 at my family’s ranch in Carlsbad, New Mexico.”

“This will be the first time I’ve participated in the Delta des Refusés,” said Jasmine Greer, who is an assistant professor of art at Arkansas Tech University [in Russellville], specializing in graphic design and interactive media. “I’m very proud to participate in this show with so many other amazing artists. Often the most compelling art comes from outside the traditional gallery spaces, so I’m excited to see what will surely be a wide variety of subjects and techniques exhibited by my fellow artists. And a special thanks goes to Rachel Trusty for putting together this exhibit and for her ongoing efforts to elevate the visibility of local artists.”

Greer’s work in the upcoming show is titled Evergreen.

“I can see the challenge of having to judge such a great volume of work for the Delta show, and it’s a shame that not every amazing piece can be selected,” said Laura Harrod, who lives in Conway. “It’s unfortunate that the subjective nature of art limits those selected to the personal taste of the jurors. For that reason, I am glad to know that, while my work wasn’t appreciated by one, it can still be seen by many who can decide if they like it or not.”

Harrod’s work in the show is titled Heart Transplant.

Deborah Kuster, who lives in Conway, has been in the Delta Exhibition three times, but this is the first time she has entered the Delta des Refusés.

“I entered because I create art that I want to be seen and enjoyed by others,” said Kuster, who has been a professor of art at the University of Central Arkansas [in Conway] since 2003.

Kuster’s art is made from her personally hand-woven textiles. She titled the piece in the upcoming show Burden.

“I occasionally enter the annual Delta [Exhibition], but this is the first time I have entered the Delta des Refusés,” said Ed Pennebaker, who lives in Clinton.

“My work progressed from functional and decorative glass to sculptural lighting, then to pure sculpture,” he said. He said that as his work evolved, he added more media and now uses cast, fused hot-worked and blown glass, along with forged and fabricated steel, found objects and stone.

He titled his artwork in the show Armadillo Dreams.

“I began my career as a black-and-white photographer in Alaska and began painting the photographs almost 30 years ago,” David Rackley said. “The image I selected for the Delta des Refuses exhibition, In the Plaza, was taken a couple of years ago in Paris. What struck me about this scene was the irony of the monumental mural, a man’s face, with shushing fingers to his lips. He is indicating quiet while the children below are heedless, in a state of playful commotion. This was a multiracial, multicultural group of children, and my intention in blacking out the figures was not to disguise their racial/cultural identities, but to emphasize their inherent equality.

“The Delta is a prestigious and highly competitive exhibition, and although I have been in it in the past, I know I can’t expect to repeat that success every year. The Refusés has a long and illustrious history in Paris and is beginning to have one in Little Rock. I am proud to be part of the tradition.”

Cathy Wester of Conway had work selected for the Delta Exhibition in 2016. She shows a piece with a similar theme in the 2018 Delta des Refusés exhibition with Western Sunlight 5.

“This piece is a fiber collage based on a photographic series I made some years ago, and the oil pastel painting that was in the 2016 Delta was inspired by the same series,” she said. “Several of the images of that series have evolved from photographic to oil pastel to fiber collage.”

After many years of not making art, Wester began drawing again in 2012, exploring oil pastels, and is currently exploring combining photography and painting into a single medium.

“My mother died when I was 14 years old,” she said. “She was a florist, and I inherited her box of floral ribbons, which I have kept all these years. I arranged and photographed them in a mandala-type format as a memorial of sorts to her. The colors of the ribbons are still as vibrant as seen in the painting. It was a joy for me to paint this subject.”

For more information on the 2018 Delta des Refusés, visit www.deltadesrefuses.com.