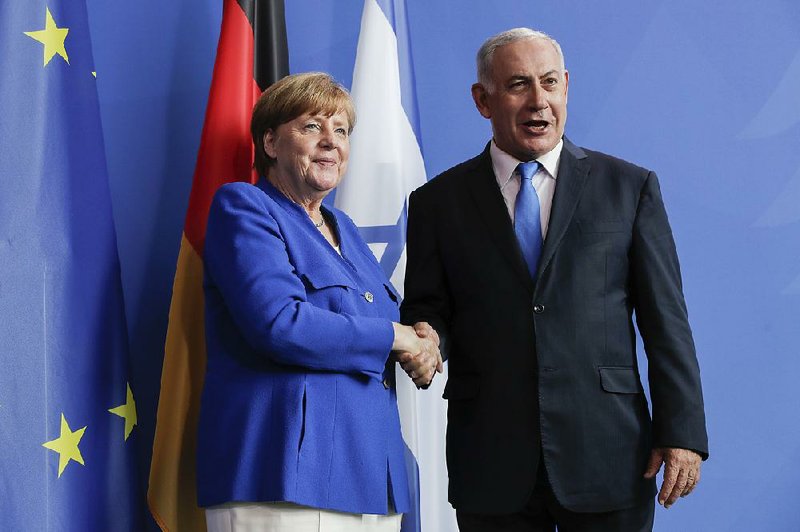 BERLIN -- German Chancellor Angela Merkel on Monday pledged to increase pressure on Iran to scale back its military influence, while condemning a tweet from the Iranian leader that said Israel is a "cancerous tumor" that needs to be removed.

The two leaders were asked about a tweet Sunday from the account of Iran's supreme leader, Ayatollah Ali Khamenei, that said his country's "stance against Israel is the same stance we have always taken. #Israel is a malignant cancerous tumor in the West Asian region that has to be removed and eradicated: it is possible and it will happen."

The Twitter account is run by Khamenei's office, and it's not known whether he dictates the tweets. The quote is from several years ago.

"Iran calls for our destruction, but it's also seeking nuclear weapons to carry out its genocidal design," he said.

Iran denies seeking nuclear weapons, and in 2015 it reached a deal with world powers that requires it to curb its nuclear activities in exchange for the lifting of international sanctions.

Netanyahu was a staunch opponent of the deal, and he welcomed President Donald Trump's decision last month to withdraw the United States from it. Germany, Britain, France, Russia and China, which also signed the agreement, have said they want to preserve it.

Merkel said that "we sharply condemn what the Iranian leadership said," but at the same time she reiterated her view that the nuclear agreement was the best way to prevent Iran from developing atomic weapons.

"We are not in agreement on all questions, but we are friends, we are partners," Merkel said of the visiting Israeli leader.

The other co-signers of the nuclear agreement met last month in Vienna after the United States pulled out of the deal, reaffirming their commitment to it.

Netanyahu suggested the deal was bound to collapse without U.S. involvement, but he said he agreed with Merkel that "Iran's aggressions" needed to be kept in check.

"We have some disagreements, as you can see, but they're not really on goal, they're more on method," he said.

Netanyahu has argued that the economic relief provided under the nuclear deal has allowed Iran to expand its military interference across the region, where it backs the Syrian government as well as militant groups like the Lebanese Hezbollah.

Berlin was Netanyahu's first stop in a European trip in which he's attempting to turn key allies Germany, France and Britain to his way of thinking on the Iran deal. French President Emmanuel Macron's office said France will insist on having a dialogue with Iran.

The possibility of the nuclear deal unraveling has raised concerns that the U.S. or Israel might resort to war if Iran ramps up its nuclear activities.

Khamenei, who makes the final decisions on all major policies in Iran, on Monday warned that anyone who fires one missile at his country "will be hit by 10" in response, but he dismissed fears of war as "propaganda" by the West.

In a speech, the supreme leader reiterated his support for the country's ballistic missile program. One of the main objections made by critics of the nuclear deal was that it did not address the missile program, which Israel and Gulf countries view as a threat.

Khamenei also said he has ordered atomic authorities to increase the country's nuclear enrichment capacity. The increase he detailed in his speech would not exceed limits set by the nuclear accord.

The United Nations says Iran has met its obligations under the deal, but on Monday, the director general of the U.N.'s nuclear watchdog renewed calls for the country to provide "timely and proactive cooperation" in inspections that are part of the agreement.

At a news conference later, Yukiya Amano said the statement from the International Atomic Energy Agency was "not an expression of concerns or complaints, but rather an encouragement to Iran."

"There's room to provide us with more proactive and timely cooperation," Amano said Monday in Vienna. "I am not saying we have any concerns. The agency has conducted complementary accesses to all the sites and locations in Iran which we needed to visit."

One of the agency's most powerful tools is "Complementary Access," or so-called snap inspections that provide short-notice entrance to nuclear sites and other facilities. Such visits to Iran weren't an option for the agency before the nuclear deal.

In 2017, the second full year of the accord, the 35 snap inspections in the Islamic Republic were the most for any country in at least six years, agency data show.

The agency's board of governors convened Monday in Vienna for the first time since Trump decided to withdraw from the deal. Amano previously warned that allowing the deal to fail would be a "great loss for nuclear verification."

Last month, in its first report since the U.S. withdrawal, the agency said Iran continues to stay below the maximum level of uranium the deal allows it to enrich. The agency's report said Iran appears to be fulfilling other obligations but is slow when it comes to "complementary access" inspections.

Information for this article was contributed by staff members of The Associated Press and Jonathan Tirone of Bloomberg News.