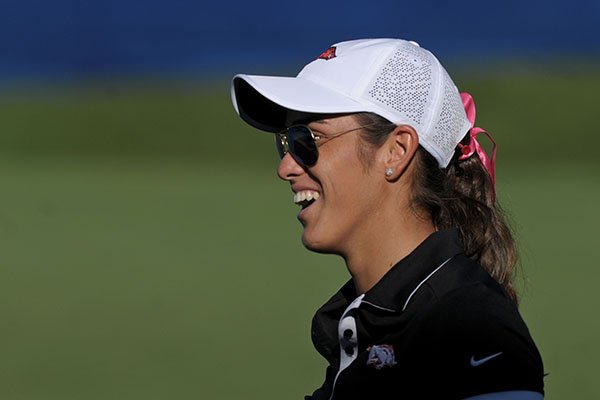 Arkansas golfer Maria Fassi smiles after finishing her round on Monday, June 19, 2017, during the local qualifier for the LPGA Walmart Northwest Arkansas Championship presented by P&G at Pinnacle Country Club in Rogers.

FAYETTEVILLE — Arkansas Razorbacks golfer Maria Fassi was named the winner of the ANNIKA Award as the top player in women's college golf on Wednesday.

The award, in its fifth year, is named for Hall of Fame golfer Annika Sorenstam, who announced Fassi as the winner in a live broadcast on the Golf Channel.

Fassi, a junior from Pachuca, Mexico, won an Arkansas-record seven tournaments in 2018 and went 3-0 in match play to help the Razorbacks capture their first SEC championship. Fassi tied for medalist honors at the SECs before losing in a playoff to South Carolina's Ainhoa Olara, then rallied down the stretch to take the individual title at the NCAA Austin Regional while helping the Razorbacks claim their first regional title.

She joined former All-American Stacy Lewis as the only Razorbacks to win four or more tournaments in a season.

Fassi led the Razorbacks with a school-record 70.5 stroke average and also posted a school-record 25 par rounds or better in 2018. She has scored in the 60s in 12 rounds, including a career-best 64 twice this season.

Fassi is the first winner of the ANNIKA Award who did not play at either Duke or UCLA.