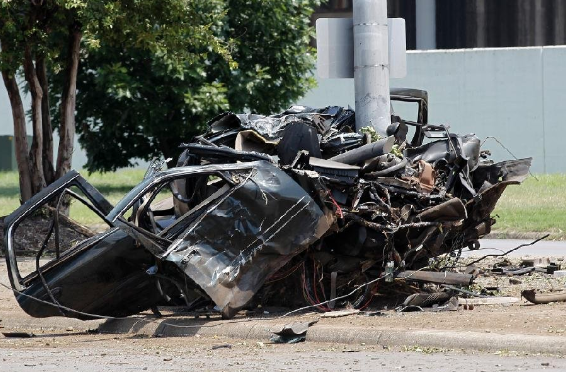 A two-vehicle crash in the intersection of Riverfront Drive and Cypress Street in North Little Rock on Wednesday, June 6, 2018, killed a 12-year-old girl, police said.

A 12-year-old girl has died from injuries she sustained in a two-vehicle crash Wednesday afternoon, North Little Rock police said.

Aniyah Dilworth was one of four people hurt in the wreck that occurred near the intersection of Riverfront Drive and Olive Street shortly after noon, according to a news release from the city's Police Department.

Witnesses to the crash told police that the Ford Crown Victoria and Ford Mustang appeared to be racing and were traveling at "extremely high rates of speed" at the time of the wreck.

Two people were in each car, the release states, and all were taken to nearby hospitals with significant injuries. Aniyah later died at a hospital, and the other three were still being treated Wednesday evening. Their names were not released.

The investigation is ongoing, police said. At least 188 people have died in crashes on Arkansas roads this year, according to preliminary data.

A North Little Rock police spokeswoman said four people were taken to nearby hospitals for injuries described as "significant and life-threatening" after a two-vehicle crash Wednesday afternoon.

Sgt. Amy Cooper said officers were sent at 12:20 p.m. to the intersection of Riverfront Drive and Cypress Street in response to the wreck.

The Ford Crown Victoria and Ford Mustang involved in the collision were probably racing, she said.

The east and westbound lanes of traffic in the area were closed around 1 p.m., the department wrote on Twitter, and motorists were told to expect delays. Cooper said the roads were cleared by 3 p.m.